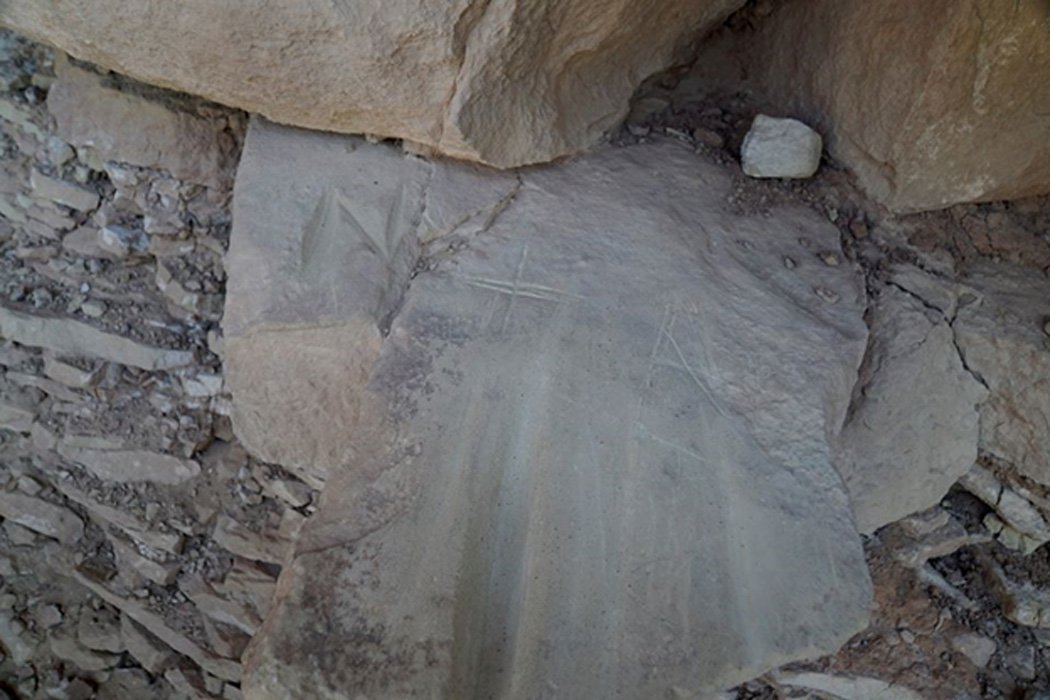 Park officials from the Mesa Verde National Park in Montezuma County, Colorado, announced that vandals severely damaged archaeological artifacts in order to write graffiti on the side of a sandstone cliff.

Created by President Theodore Roosevelt in 1906, the Mesa Verde National Park occupies 52,485 acres near the Four Corners region of the American Southwest. With more than 4,300 sites, including 600 cliff dwellings, it is the largest archaeological preserve in the U.S. Mesa Verde (Spanish for “green table”) is best known for structures such as Cliff Palace, thought to be the largest cliff dwelling in North America. However, the flagrant vandals didn’t seem to care at all about the park’s historical and cultural background and significance. In a long message posted on their Facebook page, Mesa Verde National Park officials mentioned that they are seeing more and more evidence of graffiti, vandalization and intentional littering. In one such incident, some hoodlum rubbed names onto the sandstone using prehistoric charcoal which officials say the vandal dug up in an archeological site along the Petroglyph Point Trail. The long post on Facebook (also including 7 photos of the vandalized objects) reads as follows,

“As the summer progresses and visitation increases, we are seeing more and more evidence of graffiti, vandalization, and intentional littering throughout Mesa Verde National Park. This comes in many forms and across many surfaces. In one of the pictures below, you’ll see names rubbed onto the sandstone using prehistoric charcoal which a visitor dug up in an archaeological site along the Petroglyph Point Trail. Not only did this/these individuals vandalize the cliff side, they destroyed archaeological artifacts to do so. The purpose of the National Park Service is to preserve unimpaired the natural and cultural resources and values of the National Park System for the enjoyment, education, and inspiration of this and future generations. Please help us in this effort and refrain from creating graffiti, intentionally littering, causing damage to or otherwise disturbing the landscape in all National Parks. If you see others engaging in any of these acts, please report this activity to the nearest Park Ranger or to staff in the Chief Ranger’s Office located next to the Chapin Mesa Archaeological Museum.

Despite the fact that this is the mission and purpose of the National Park Service, we are seeing a growing number of instances of intentional damage throughout NPS sites every year. Why do you think people do this? What do you think the intent is and what can we do as a culture to cut down on these occurrences?

Thank you to all of the visitors who do visit with respect. Let us all leave no trace, educate others about proper stewardship of public lands, and enjoy these wonderful landscapes as they are.”

A more recent problem that is happening in the national parks is that painted rocks that are being used in scavenger hunts connected to social media are being left, littering the public areas, with potentially harm to the environment being caused by the paint used, and also disturbing the natural beauty of the area. A Common Phenomenon These Days

Unfortunately, these acts of vandalism are not a rare phenomenon these days. It appears to be a unique achievement for vandals to leave their mark with awfully ugly graffiti on monuments and churches in the past several years. As Ekathimerini reported in 2008, graffiti artists in Athens, Greece, have been vandalizing this ancient city’s monuments for years now. Churches and archaeological sites in Greece used to enjoy a certain immunity from graffiti and the stylized signatures known as tagging, but are now increasingly part of the action as the phenomenon takes off in Athens.

Additionally, the Washington Free Beacon reported in 2016 that the North Dakota monument of Washington, D.C.’s World War II memorial was vandalized with graffiti to protest the controversial Dakota Access Pipeline Project. Interestingly, back in 2015, a case was dismissed against a Chinese woman who was suspected of tossing green paint on several D.C. landmarks, including the Lincoln Memorial, after a judge determined she was incompetent to stand trial. Jiamei Tian had been charged in 2013 with one count of defacing property after paint was found spattered in Washington National Cathedral. However, as it happens in the vast majority of these cases, the law proves to be really gracious with the vandals, a fact that does nothing to deter more of them from keeping destroying and vandalizing monuments of immense cultural, historical and archaeological value.