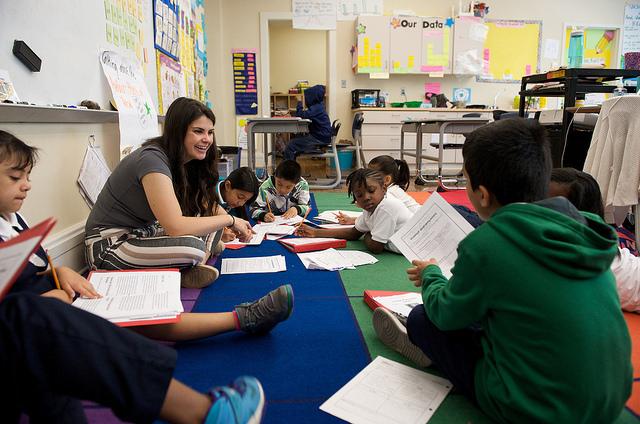 The White House Initiative on Educational Excellence for Hispanics has launched a digital campaign to highlight the impact of Latino teachers and hopefully to attract more Latinos to the teaching profession.

The Education Department launched the campaign this week with a video featuring second lady of the United States Jill Biden and Erica Castro, wife of U.S. Secretary of Housing and Urban Development Julian Castro. The high-profile educators asked viewers to share the stories of Latino teachers who have made an impact on their lives using the hashtag #LatinosTeach.

“While the nation’s student population is becoming increasingly Latino, its teaching workforce has been lagging far behind,” Suzanne Gamboa reports for NBC News Latino. “According to the Department of Education, about 8 percent of the nation’s teachers are Latino, while one in four of the nation’s public elementary and secondary school students are Latino.”

Consider California, home to the largest Latino population in the country. There, the majority of students are Latino, and 73 percent are minorities, but only 29 percent of teachers are nonwhite, according to a 2014 Center for American Progress study.

Why does this matter? My colleague Emily Richmond answered this in a recent post on The Educated Reporter.

Some research has concluded that when black and Hispanic students are taught by teachers of the same ethnicity, their academic performance improved. At the same time, teachers are arguably one of the most influential role models students encounter outside of their own families. One study found that the teacher diversity gap was actually contributing to the high dropout rate among students of color.

The Education Department cites various challenges for the wide diversity gap including college access and affordability for Latino students, and also the number of Latino college graduates, which is still not on par with the degree attainment rates of students of other ethnicities. Besides that, a teacher’s salary is not attractive to many students, including Latinos.

The White House, as well as large organizations like the American Federation of Teachers, has previously launched programs to recruit more Latino teachers, and this year, Teach for America sent 600 new Latino recruits into American classrooms. But without even more effort to close the Hispanic teacher-student gap, the disparity is likely to continue.

Through the #LatinosTeach campaign this week, anyone interested can nominate a Latino educator for special recognition on the White House Initiative on Educational Excellence’s website by emailing information to WHIEEH@ed.gov.

Crowdfunder: Working For Equal Opportunity in Tech
Comment
New analysis of generational differences hints to a different future for Latinos