Why it’s time to end in-person voting for good 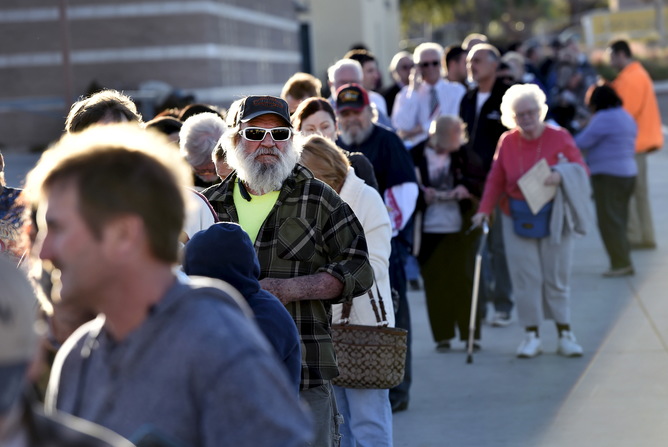 By Ben Pryor
The Conversation

During President Obama’s final State of the Union address, he called for reforms to the voting process, saying, “We’ve got to make it easier to vote, not harder. We need to modernize it for the way we live now.”

Just ahead of Super Tuesday and in the midst of the presidential primaries – where we’ve already witnessed record turnout and long lines in Iowa, New Hampshire, South Carolina and Nevada – it’s a good time to reconsider the president’s appeal to modernize the voting process, and review an encouraging effort to do just this.

Many have questioned the burden and fairness of voter ID laws, particularly for minority voters. But even easing voter ID laws doesn’t eliminate the bias of the polling locations themselves. In fact, a score of recent studies highlight how the building where you vote – whether it’s a church or a school – can subconsciously influence which boxes you check on the ballot.

The method by which a polling location can influence someone’s decision is known as priming. Priming is a subconscious form of memory, based on identification of ideas and objects. This effect happens when external stimuli “manipulate” internal thoughts, feelings or behaviors. After becoming activated by stimuli, priming triggers these associations in our memory. For example, one study showed that a store playing traditional French or German music can prime shoppers to buy French or German products.

Most states prohibit campaigning within 100 feet of a polling place, and others ban wearing campaign buttons or t-shirts while voting. While these laws were passed to prevent voter intimidation, subtle exposure to campaign paraphernalia could result in priming. During the Nevada caucuses, some voters complained that caucus volunteers – not so subtly – were wearing Donald Trump paraphernalia.

But even if banning campaigning near polling sites were strictly enforced, research confirmsthat locations themselves can serve as contextual primes that influence specific attitudes and behaviors.

Other studies also observed that being exposed to churches and clerical images can promote someone’s Christian identity, making them more likely to back political initiatives aligned with Christian values and philosophies.

For these reasons, it’s plausible to suspect that churches could cause religious priming in voters, unfairly biasing voters to vote for more conservative candidates and take more conservative stances on ballot issues such as same-sex marriage.

The use of schools as polling places has also been called into question, and social scientists have examined whether schools can unfairly bias vote choice on education-related ballot measures.

Since 2000, education measures have made it to general election ballots 208 times. The thinking goes that voters in schools are likely to be primed to think about their own schooling – or their own care for children – and, in turn, support pro-education measures.

And the studies say…

At this time, there are six published studies on the issue of whether or not polling location can subtly influence our vote. And all of them, to a varying degree, conclude that the priming of polling places is a real phenomenon.

In 2008, professors Jonah Berger, Marc Meredith and S. Christian Wheeler were the first to investigate this matter, finding that individuals voting in Arizona schools were more likely to support a ballot measure that increased the state’s sale tax to finance education.

After controlling for voters’ party identification, Rutchick found the conservative Republican challenger received 41 percent of the vote in churches and just 32 percent in secular locations. Then, after controlling for the age, race, sex and party identification of each voter in 1,468 polling places in the 2006 general election, he found that 83 percent of people voting in churches supported establishing a definition of marriage as between one man and one woman, while 81.5 percent did so in secular locations – a significant difference.

In late 2011, I conducted a study with political scientists Jeanette Morehouse Mendez and Rebekah Herrick, analyzing three measures voted on in Oklahoma’s 2008 general election. One measure sought to ban same-sex marriage in the state, while the other two sought to create a lottery system to fund education.

While our findings were not as distinct as the previous studies, we did discover that Oklahomans voting in churches were less supportive of the ban.

In any case, our education findings were consistent with Berger, Meredith and Wheeler’s. After controlling for political ideology, we found that voters in school buildings were more supportive of the education referendums than those casting votes in community buildings.

In 2014, we published a follow-up study that expanded the research to multiple states. We tested election data from Maine, Maryland and Minnesota’s 2012 general election. Like the previous studies, we theorized that churches and schools could unfairly prime vote choice. While we found that churches actually primed more support for same-sex initiatives, there’s ample evidence to support the confounding results in Maryland and Minnesota.

Also, like previous studies on the priming ability of schools, we found that voters in schools were more supportive of education. For example, in Maine’s 2012 general election, 47 percent of votes cast in schools were in favor of the education bond issue, while only 42 percent did so in community buildings and miscellaneous locations. We ran additional tests on the data to control for political ideology, and the results reinforced our findings.

Most recently, a study on polling sites was replicated for the first time outside the U.S. In October 2015, political scientist Matthias Fatke published his work concluding that polling places in Germany could influence vote choice.

Taken as a whole, the empirical evidence has found that a seemingly irrelevant thing – a polling location – can influence a voter’s decision on a political candidate, political party and ballot issues.

In 2011, the Boston University Law Review published an article arguing that the courts were wrong to allow the use of churches as polling places. The article’s authors, Syracuse law professors Jeremy Blumenthal and Terry Turnipseed, supported the elimination of polling locations and called for the adoption of a ballot-by-mail system.

Colorado, Oregon and Washington have taken legislative action to remodel their voting process, making it easier (and fairer) to vote. They’ve done this by eliminating the traditional polling location, and going to an all-mail voting system.

In these states, ballots are mailed to registered voters at least two weeks prior to Election Day. Voters then decide, at their convenience, to either mail their ballot back or drop it off at a designated location.

Some proponents argue against all-mail voting, citing tradition, as many are accustomed to voting at their polling location. Others contend it will lead to higher rates of voter fraud or coercion.

But advocates of this new method praise the emergent improvements in voter turnout and safeguards, and the decreased costs from eliminating poll workers. Since Oregon first implemented all-mail voting, they’ve ranked as a national leader in voter turnout. After Washington made the change, their turnout improved to 13th best in 2012, up from 15th in 2008. Similarly, Colorado (the most recent state to enact all-mail voting) saw their turnout increase to roughly 2 million people in 2014 – up from 1.8 million in 2010.

A total of 13,397 polling places were examined in the range of studies cited above. Nearly all the findings suggest that priming concerns should join  convenience and lower costs as reasons for adopting all-mail voting.

It would answer President Obama’s call to modernize the voting process, providing voters with the time to develop informed decisions about candidates and issues.

Ben Pryor is a Researcher at Oklahoma State University

Rio Grande Valley town to reignite its bus tours for Reynosa maquilas
Comment
Before talking about HIV, Latinos need to have this conversation first