Latina Lista: News from the Latinx perspective > Columns & Features > Call-2-ACT > Stephanie Pucheta, 10-Year-Old, On Dad’s Deportation: ‘Why Do They Have To Be So Cruel?’

Stephanie Pucheta, 10-Year-Old, On Dad’s Deportation: ‘Why Do They Have To Be So Cruel?’ 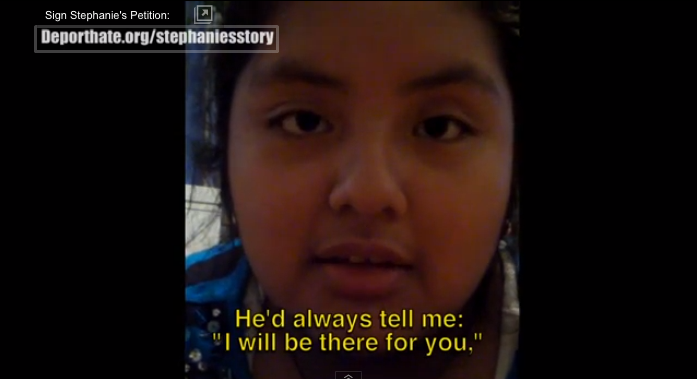 WASHINGTON — Every day for two weeks, 10-year-old Stephanie Pucheta sat down in front of a camera and talked about her father, Julio Cesar Pucheta, who was deported in January. She talked about the day a judge told her father he would be forced to leave home, about how she was removed from the room because she couldn’t stop crying, about her mother’s chronic illness, and about doing her homework alone without her father’s help.

“My life has changed without my father,” Stephanie, an American citizen born in the United States, said to the camera in Spanish. She began to cry. “Since he’s been gone, I miss him every day. Every morning when I wake up I wonder why they didn’t let him stay here. Why do they have to be so cruel to the families that are here?”

When she was done, she sent the video to Cuéntame, an organization that shares immigrant stories. Cuéntame had sent her a video camera so she could use it to tell hers. The video was her first take.

Stephanie had contacted Cuéntame earlier this year, one of countless groups she reached out to in a desperate bid to find someone who could help her stop her father from being sent to Mexico, but it was too late. Now she, like thousands of other children in the U.S., is living in the country without one of her parents because of an immigration policy that often leaves family-child relationships out of the equation.

Congress has been debating comprehensive immigration reform since 2001, aimed at preventing predictable tragedies like the one that hit Stephanie. Families like hers are paying the daily price for the ongoing congressional failure to pass a bill and the Obama administration’s track record of deporting immigrants at record-setting rates.

The current iteration of the reform bill includes many provisions that would be good for families like Stephanie’s. The legislation proposed by the bipartisan “gang of eight” senators would provide some undocumented immigrants with a pathway to citizenship and allow some who have already been deported to come back to the U.S. and reunite with their families. Immigration officials would be given more discretion to consider the hardships faced by children when a parent is up for deportation.

But the bill has to make it through the Judiciary Committee, where it is now under consideration, and pass on the Senate floor. A number of amendments could threaten those provisions during that process. Sen. Chuck Grassley (R-Iowa) proposed one that would prevent immigration judges from using discretion to decline to deport someone because of the presumed hardship on their U.S. citizen child. Sen. Jeff Sessions (R-Ala.), proposed one that would make citizenship an almost impossible goal for poor undocumented immigrants, due to restrictively high income requirements, and another that would make it harder for would-be immigrants to come to the U.S. based on family ties here.

Axel Caballero, the founder of Cuéntame, said the group hopes sharing Stephanie’s video will help lawmakers think about families like hers when working on immigration reform.

“Stephanie’s story is emblematic of the over 25,000 immigrants who apply for family unity waivers each year only to be torn apart by an immigration system that emphasizes blind enforcement policies over sensible and human rights solutions,” Caballero said in an email. “We are urging our legislators to listen to Stephanie and the thousands of defenseless migrant children looking for a prompt and effective solution in as they discuss immigration reform provisions.”

Stephanie Pucheta was born in Georgia in 2002, a few years after her parents came to the U.S. from Mexico without authorization. She didn’t find out about her parents’ undocumented status until she was 8 years old while working on a project for school. Her father was picked up after a DUI traffic arrest in 2012 and detained for a year before he was deported. Stephanie’s mother, Maria Ortiz, is ill with a chronic condition and the family fears Stephanie could be left alone — losing one parent to death, the other to deportation.

With Julio Cesar Pucheta in Mexico, Stephanie and her mother could move there to be with him, but they do not know if Maria could receive the same level of medical treatment. And Stephanie, as an American citizen, does not believe she should have to leave her home country. She wants to stay here in the U.S. and become an immigration attorney.

“Sometimes I think about it,” she said in a phone interview about moving to Mexico. “But sometimes I say, I shouldn’t go because I got an education here, and like my mom said, I want to be somebody in this world.”

This story initially stated that Julio Cesar Pucheta was picked up after a traffic arrest. It has been clarified to state that the arrest was for a DUI.