MEXICO — I’ve lived in developing countries where even the poor don’t drink the water from the faucet, knowing it’s full of amoebas. I’ve travelled and worked in environments where even “good” restaurants have no hot water to clean the dishes, and where you’re lucky if the water flows in a quarter-inch stream.

In the states, I’m probably a bit more comfortable in underserved neighborhoods than in the “overserved.” I’ve never been one of those people that doesn’t cross the tracks. At the same time, since the age of 16, I’ve never been unemployed. I’ve always had a roof over my head, food in my stomach, and a good net of loved ones around me, even if a thousand miles away or more.

My vacation MO is not to lounge around on a beach, on a boat, at a casino or at a ski resort. I prefer active vacations with a purpose. So this summer, I set off to Mexico to volunteer at a children’s shelter run by nuns. While a few of the children living there were orphans, the majority were children of the working poor.

Jenny’s family is a good example. She’s 13, and the oldest of five children who frequently sleep, eat and play at the shelter. Her grandparents died before she was born. Her father lives in another city, several hundred miles away, and has said he’ll bring them all to live with them, but it seems as if she’s never met him. She doesn’t mention her siblings’ dads, but none of the fathers live with them or seem to provide any financial or emotional support. She and her siblings are all cute, bright, inquisitive and sweet kids, yet they lack formal education. She says her birthday is coming up, yet doesn’t know what date. Neither do her siblings. As is common with the kids here, whenever I see Jenny she gives me a big hug.

Like most the kids at the Casa del Nino Pobre (The Poor Child’s House), they go for days wearing the same clothes, after playing in the mud and sitting on the damp dirty gravel. Their yellowing teeth are broken, rotting away, and in the case of a few, impede their speech. They have scars on their faces, and Jenny has a jaw mark on her arm where a boy bit her.

Teens like Jenny, seem to thrive doing activities geared to the K-3 kids. Lalo is 12 and artistically inclined. I ask him if he wants to help the young ones during a session where the kids write their names and glue beans to the letters. No. He’d rather do the same activity.

The next day, Jenny is the last to leave the room painting a princess from a page of a child’s coloring book.

During a game of Hot Potato, the kids are told to sit on the ground in a circle. Jenny’s 11-year-old sister tells me she can’t because her leggings are ripped in the crotch. After a few rounds, she decides to play, and pulls her shirt down low between her legs.

Thirteen-year-old Hilario is quiet and serious. Each day he asks for Lisa, a volunteer art teacher from Chicago with a masters in curriculum development. In appreciation for some guidance she gave him the first day, he gifts Lisa daily with a new lanyard he’s twisted into a different form. On an outing to see a kids movie, he tells us that he’s never been to a movie theater before.

Gabi is one of the few that is always meticulously dressed and wearing beautifully adorned braids. She’s also the only one that when making name tags, made one for her mother, Ana. At age seven, she’s one of six siblings that spend each day at the Casa while Ana is at work. As I’m reading a Disney book, she’s the only one that offers to read a page. She does so slowly, but with barely an error. I turn to the boy next to her and ask him if he can read. “No,” he answers. He’s the same age as Gabi. That shouldn’t surprise me since many of them can’t write their names yet, nor can they recognize the numerals 1, 2 and 3. 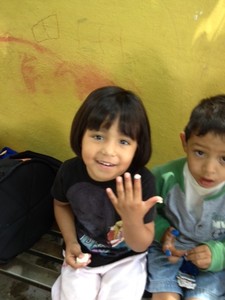 Perhaps what’s most frustrating is knowing that when we are not present, the kids are almost totally unsupervised. The only adults that tend to hang out periodically in the central areas with the kids are a few that are mentally challenged. Like the kids, they are here for shelter, given a place to sleep and eat. And a bit of protection.

Today, Gabi is hit in the head with a rock. She sits very quietly inside doing her artwork, while holding a napkin to her head to try to stop the bleeding. After several hours, the only nun under the age of 70 takes her up to the infirmary, cleanses the wound, puts a clotting agent on it, and ties her hair to pull shut the wound.

Fights are normal here, and during my week here, the nuns have never been present to interrupt or scold the kids. So the kids fend for themselves. During one book reading session, a girl hits five-year-old Lulieta, for which her three-year-old little brother retaliates against the instigator.

The Casa del Nino Pobre is a free shelter that relies on donations to feed up to 150 kids at least one meal a day. They have their own hens to provide eggs, and also a nun/midwife who assists pregnant women with low-cost childbirth. The Mother Superior has been here for more than 20 years but she and the other nuns are far too old to be chasing active kids on playgrounds and in facilities that would score a zero on a child safety test.

As soon as the kids are out of diapers, they are allowed total freedom to run anywhere unsupervised in the courtyard or on the playground. The baby room is the only place an adult is stationed at all times.

My visit and that of two of the five invited volunteers is unexpectedly cut short. Amid tears and hugs, Jenny and her sister bring us 3 X 5 cards they have decorated that say “Te Quiero Lisa. Te Quiero Deborah. Te Quiero Julie.”

Deborah Charnes has more than 30 years working in the bilingual communications industry. A Texas resident since 1998, she is the owner of The Write Counsel, a strategic public relations consultancy dedicated to transforming communities. Additionally, she is a certified yoga instructor and completed coursework in Ayurvedic studies.

Guest Voz: Voting is the only way to turn the tide of legislative bigotry and reclaim hard-fought civil rights
1 Comment
Spotlight Nonprofit: Improving the odds of natural disaster survival in third-world countries with first responder education