CARACAS — Born in 1973 and raised in Texas playing basketball, Tim Jones has had a fulfilling sports career. From the time he was very young, Jones stood apart from his teammates. His talent became clear during his college years when he helped to win the NCAA championship at Georgia State University. 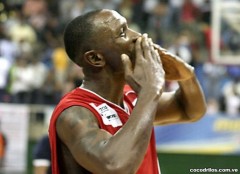 Since then, his love for the sport has literally taken him around the world. From Israel, Cyprus, Mexico, Colombia, Venezuela, Argentina and now to Chile, wherever he went, Jones made the shining difference on Class A international teams such as Atenas de Córdoba, Cocodrilos de Venezuela, Universidad Católica y Puente Alto en Chile, Azucareros de Colombia o Barreteros de México — and fans noticed.

Spending so much time in South America, playing his favorite sport to appreciative audiences, it wasn’t long before Jones found himself feeling right at home with the Latino culture, no matter the country. So much so, that he now considers Chile (where he now plays basketball) his adopted second home.

In 2011, Jones became the coach for Colegio Mayor de Chile and Duoc UC, where he was awarded the “most spirited coach” of DUOC. But he hasn’t given up the court entirely. He still plays professionally for the Chilean league Movistar, as a backup for the San Juan Evangelista team.

But it would be a mistake to think basketball is the only passion in Jones’ life.

Tim is certainly a nice box of surprises. He’s not only a professional and very popular basketball player, he is also a singer. Last year, his band Dope Ice, along with Joe Bananas, Eloahim-Ra, and Pato Baier, released several songs. Playing a mixture of R&B, Hip Hop and Rap with soul, the band’s music is gaining a following.

The opportunity to speak with this multi-talented athlete and musical artist just couldn’t be missed by someone who had spent 15 years playing basketball herself, and who had joined countless Venezuelan fans cheer Jones as he worked his magic on the courts.

So when given the opportunity, I had to go one-on-one:

Who do you admire in basketball?
Michael Jordan, Leroy Harris, my cousin.

When did you start in the music business?
I started before I came to Chile, in 2005, making the song Life is a struggle (It was song for the documentary Rebotes.)

When was the first time you played basketball in Venezuela and for what team?
In 2007 for Cocodrilos de Caracas.

How was the experience?
Awesome experience. Very good people and beautiful country.

What’s been your biggest difficulty to overcome as a player?
Learning how to try to help my players follow me and help them to get in the game

What do you like the most about Venezuela and Venezuelans?
Venezuela is a very nice country and the people reflect the energy of the country. Venezuela has everything.

When will be your next season/visit to our country?
It will be nice if it was sooner than later but I really don’t know.

What is your biggest goal as a man?
Be a good father, the best.

What is your biggest motivation in life?
My family.

Any plans to join the NBA someday?
No, that time has passed for me.

What do you think of women in basketball?
I think it is great, awesome. I enjoy watching them play. A lot of times, women show the fundamentals that we forget about. Nowadays, they are as athletic as us. They make the game look so easy.

What would you change in Venezuelan basketball?
For me, if it was the same as when I was playing for Cocodrilos, I wouldn’t change anything.

Why do you think you are so attracted to Latino culture?
The passion. People are intense and always stay happy.

What would you like to say to your fans?
I thank God for you all, because through my ups and downs, you are the reason that I had more ups than downs and my name and talent are still remembered. No matter how much money I ever made, what is important for me is how I play the game and how people remember me.

Who do you admire or enjoy playing with the most in the Venezuelan basketball league?
Victor Diaz and Richard Lugo.

Jennifer Barreto-Leyva lives in Caracas, Venezuela where when this 5″11 venezolana is not defending the rights of her clients as a lawyer or inspiring people as a motivational speaker, she is an outspoken defender on the rights of plus-size people.
Jennifer is Miss Plump Venezuela and the first Latina who participated and won the Miss Universe for Plus-size title. She is also the first venezolana plus-size model and, consequently, is credited for introducing the plus-size modeling division throughout Latin America.

Since 1999, Jennifer has penned a regular column, Tu Rincon con Jen, for the only online site dedicated to plus size people in Spanish, gordos.com. In addition, Jennifer is also taking her message about body issues as a blogger with Estilos Blog, a celebrity blog based in Florida.

Because of her sassy outspokenness and willingness to force the issue that beauty does not lie with a person’s weight, Jennifer has found her message much in demand from South and North America to Europe and Asia.
As a result, Jennifer has launched the first spanish-language magazine in history for plus-size people — Belleza XL.

In addition, Jennifer continues to provide constant inspiration for women of all sizes through her blog and Facebook page. She says that she always knew that when it came to defending who she was, no one was going to do it for her.