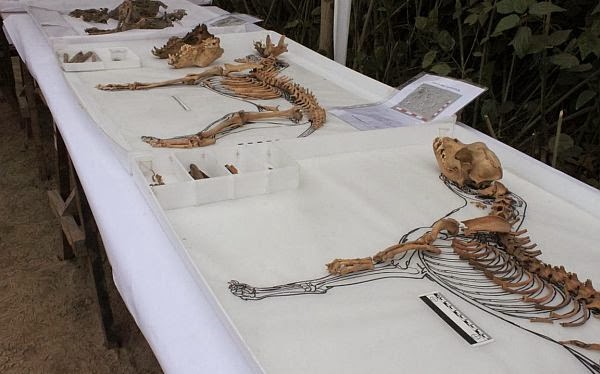 Archaeologists investigating the Maranga complex in the Parque de las Leyendas in Lima, Peru, have made a series of discoveries that appear to be ritual burials of a large number of dogs.

According to El Comercio, excavators working at the site have unearthed 62 complete canine skeletons, as well as the incomplete remains of 75 more.
The dogs were posed in resting positions and surrounded by offerings, writes El Comercio. Lucénida Carrión, the director of the dig, confirmed that the dogs were buried alongside human companions.

Carrión also told El Comercio that “This evidence leads us to believe that we’re dealing with some kind of ritual performed in the huaca, as it has some similarities with the kinds of burials that we see in the Late Intermediate Period.”

Carrión also said that the bones “may be 900 or 1,000 years old,” and added that “We’re performing laboratory analyses. Archaeologists are evaluating the evidence, and later we’ll have an interpretation.”

According to El Comercio, the bones discovered are not the remains of “perros calatos,” Peruvian hairless dogs. “They’re not hairless dogs, they are dogs with yellowish or brown fur […] It must be a ritual burial, as they were found accompanying human remains,” Carrión explained.

Archaeologists involved with the project are seeking financial support for further in-depth investigation of the site.