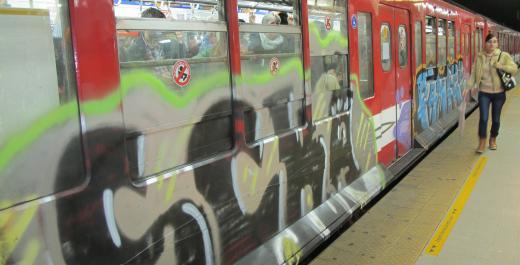 In recent years, Buenos Aires has become a “graffiti-friendly” city, where artists have converted many old and peeling walls into massive outdoor murals. In some cases, the owners of houses and businesses commission the graffiti. Other times, the artists help themselves to their canvases. 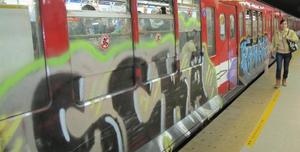 BUENOS AIRES, ARGENTINA – Luciano Federico Gatti, 31, teeters on a beat-up ladder more than four meters above a street corner in Buenos Aires, the capital of Argentina. Aerosol cans of varying colors hang from his black belt. He alternates between light and dark gray and light and dark pink to paint the corner of a wall that he has spent months working on.

He is painting a city – but not just any city. The houses and buildings have lifted off the ground and are floating toward the sky via hot air balloon.

Gatti, a graffiti artist who goes by the alias “Ice,” has been painting in the streets of the capital for the past 16 years.

“When I started at 15 years old, I wasn’t looking to identify myself or to have a group of friends,” he says. “I painted because I liked it. Something happened to me when I was painting a wall. After many years, I realized everything that I feel when I paint.”

He paints because it makes him happy. And the walls of the city to him are a giant canvas where he can express his creativity without having to battle in the traditional art circuit.

“When I began, I thought it was a good way of showing what I did and not having to go to an art gallery,” Gatti says.

To make a living, Gatti set up a fabric printing shop, where he works for different clothing brands. He has a partner and two employees. But in his free time, he pursues his passion: graffiti. He says graffiti allows him to clear his head and express himself while having a job takes the economic pressure off his work.

Gatti has characters that he likes to repeat in his paintings. For example, he has already painted five apes throughout the city, all different colors. One ape is a critique of people who watch TV all the time, though Gatti says that most of his work is strictly creative without any specific meaning.

Other recurring motifs in his work are mushrooms of every kind and color. But above all, he enjoys painting surrealist landscapes.

“I like to do surrealist landscapes,” he says. “I like to open the imagination of the people. I want people to stop on a corner for 15 seconds and forget everything that surrounds them.”

Buenos Aires is fast joining the meccas of graffiti in Latin America, with some works commissioned by business proprietors, homeowners and even the city government and others of the artists’ own volition. They are generally welcome by the public and accepted by police, but graffiti in prohibited spaces draws criticism and sometimes jailtime. Graffiti artists’ motivations vary from creativity and self-expression to ego and adrenaline.

The graffiti movement in Buenos Aires began in the 1990s, but it began to take off after 2000, Gatti says. Graffiti is one of the four pillars of hip-hop: singing, dancing, painting and playing music.

Graffiti artists that group together are called a crew, Gatti says. In Buenos Aires, the crews persistently fight for space under strict laws and in general don’t get along well with each other.

Graffiti artists usually begin with painting tags, which are signatures or the initials or acronyms of the name of the artist or crew, Gatti says. Later, they start graffiti bombing – fat letters usually outlined by another color. Finally, the more experienced artists advance to murals.
There are also codes that graffiti artists respect. For example, artists can’t paint over each other’s work, as this would suggest superiority.

Gatti explains that when he looks for a wall to paint, he opts for the front of abandoned buildings and investigates about their owners in order to avoid problems. He tries to pass this practice along to younger graffiti artists, advising them not to paint on the properties of neighbors who have taken great care to whitewash the exteriors of their homes.

If artists respect these principles, the police don’t bother them, he says. This is what situates Buenos Aires as one of the graffiti nexuses of Latin America.

“Valparaíso, in Chile, and Sao Paulo, in Brazil, are the two meccas of graffiti in Latin America,” Gatti says. “Buenos Aires is joining them. They say that Buenos Aires is ‘graffiti-friendly’ because people come from anywhere and, whenever in a reasonable place, paint without the police getting them into trouble.”

Gatti says that residents have commissioned him for various graffiti works. Many times, it’s people who want to have a beautiful painting in front of their houses in order to avoid other graffiti artists inscribing their tags with black spray paint.

“Having my newstand painted in this way, I have the advantage that they are not going to come paint graffiti letters,” he says. “Nor are they going to put up political posters.”

He says the painting on his newstand is also attractive.

But paralell to what may be called legal graffiti is vandalism, when artists paint prohibited spaces, like the subway, or where they don’t have the owners’ permission.

Diego “Die” Rodríguez, 36, is a graffiti artist who sometimes collaborates with Gatti on murals. But Rodríguez is also part of crew called B2 along with 12 others. One of the crew’s regular activities is painting subway cars, which is illegal.

“We get together generally at night and, for example, in eight minutes we have to paint a subway in a tunnel,” Rodríguez says.

They usually limit this graffiti to tags or bombs becauses they don’t have enough time to create elaborate designs. They must also overcome various security obstacles. “There are padlocks,” he says. “There are cameras. In the worst of cases, the locks are broken, the cameras are blocked or avoided. In extreme cases, it has reached tying up the security guard, without doing anything to him or her.”

But this graffiti doesn’t always find favor with subway users, who until recent years were not accustomed to boarding painted cars.

Susana Mirosmik, a woman in her 40s, takes the subway to get to work. She says that lately, it’s common for graffiti to appear on various cars. What bothers her most about this is when the artists paint the windows because it’s hard for passengers to look out to see which station they are at.

Painting the windows also raises security concerns, says Diego Ojeda, a policeman posted in one of the subway stations.

“If the windows are painted, one can’t see into the interior,” he says.

He says he can appreciate the beauty of some graffiti, but that it’s better-suited for large walls, not on subway cars.

“For me, the graffitis here are out of place,” he says. “There are some graffitis that look beautiful, but I like seeing them outside better.”

Although grafitti is about creativity and self-expression for Gatti, Rodríguez says that the graffiti artists who tag and bomb the subway cars enjoy seeing their names in big letters traveling all over the city.

“Graffiti is pure ego,” Rodríguez says. “The bigger and more eye-catching it is, the better.”

He explains that painting a subway car is also about the adrenaline. The ultimate objective is to leave before the police arrive.

“It’s 100 percent adrenaline,” he says. “You try to do what you can to paint and to leave and that no one finds out that you were there. In the worst of cases, you go to jail. One boy was in jail and in solitary confinement for three days.”

Rodríguez says that one time, various members of his crew ended up in prison together. The police frisked them and took all their personal effects before putting them in jail. But one of his crew members succeeding in stashing one thick marker, so they graffitied the walls of the cell.

But the city government of Buenos Aries recently commissioned the same group, whose members have collected various citations for graffiting prohibited areas, to paint the inside of one of the most important cultural centers of the city, Centro Cultural Recoleta.

“I don’t know if the Culture department of government has contact with the police, but it’s funny,” Rodríguez says.

The bearded artist, who is the author of various murals throughout the city, confesses that he doesn’t go out to paint every day as he used to when he was younger. Still, he never leaves the house without a thick marker.

art, Buenos Aires, featured, graffiti
Previous Post We Come From a Lineage of Survivors — but to survive cancer we must be proactive
Next PostNew book reveals spread of new global woman's movement — Grandmother Power!

We Come From a Lineage of Survivors — but to survive cancer we must be proactive
2 Comments
New book reveals spread of new global woman's movement — Grandmother Power!