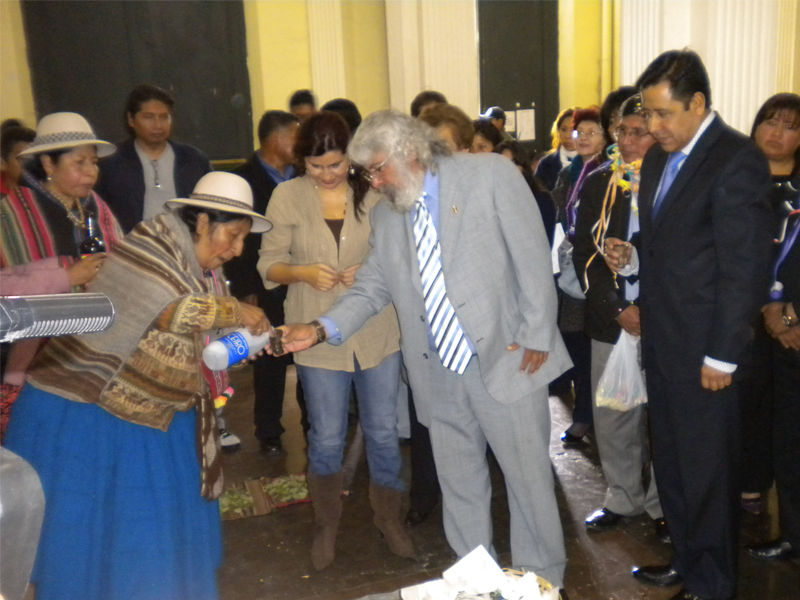 New law seeks to prevent the extinction of 15 of the 36 indigenous ethnicities at risk of disappearing.

LA PAZ, Bolivia – A new law may prevent the extinction of 15 of the 36 indigenous ethnicities in Bolivia at risk of disappearing.

Presented on Aug. 22, the Draft Law for the Protection of Indigenous Nations and Peoples at Risk of Extinction, in Voluntary Isolation or Without Contact has been under development by indigenous leaders since 2010.

The legislation, which will receive input from affected communities, will be debated by the Plurinational Legislative Assembly.

“If the indigenous peoples disappear, the denomination of ‘Plurinational State’ that Bolivia adopted through its new Political Constitution [in 2009] won’t make sense,” said Bienvenido Zacu, an indigenous representative and leader of the Guarayo people.

The law suggests the inclusion of four new crimes in Bolivia’s Penal Code:

The law also establishes the creation of the General Directorate of Indigenous Nations and Peoples at Risk of Extinction, in Voluntary Isolation or Without Contact (DISEPIO).

The institution will coordinate the development of plans and programs to protect the indigenous, Deputy Minister for Native Indigenous Justice Isabel Ortega said.

DISEPIO will establish reserved and protected areas for the next 10 years for indigenous ethnicities at risk of extinction. It also will provide state land that’s suitable for human settlement to vulnerable ethnicities’ lacking space to survive.

The institution also may implement health plans for communities that require medical assistance immediately. It also will carry out interviews and use aerial photographs, satellite images and aerial surveillance, as well as land- and river-based expeditions, to monitor the indigenous communities threatened with extinction.

The 2012 Census revealed the most critical cases of potential extinction involve the Machineri people, with 38 inhabitants; the Guarasugwe, with 42; and the Tapieté, with 99. The other 12 at-risk ethnicities have populations that range between 160 and 1,800.

The data provide a stark contrast with the indigenous groups such as the Aymara and Quechua peoples, each of whom has a population of more than a million.

The 2001 Census stated indigenous people accounted for 38% of the 8.3 million people in Bolivia. In 11 years, the figure dropped 10 percentage points, according to the 2012 Census. Indigenous ethnicities account for only 28% of the country’s 10 million residents.

Félix Patzi, an Aymara sociologist who formerly served as Bolivia’s minister of education, said the decline can be attributed to three social variables: cultural alienation, migration and the absence of a specific statistical study of indigenous peoples.

Ortega added that external factors also have played a role in the rising threat of extinction. He said that on the border with Brazil, the Machineri and Yaminahua peoples constantly are threatened by the region’s loggers.

“The timber and rubber companies went into the Amazon as if they owned the place and our indigenous people were forced to flee and seek refuge in Brazil,” Ortega said. “These situations require us to modify and apply our legislation in favor of indigenous peoples.”

The poor living conditions and lack of health care in indigenous communities also pose a threat. Ortega said the main reason behind the threat to the Yuqui people is a tuberculosis epidemic, coupled with a lack of food in its territory.

“The law is good, but there’s debate on how to apply it,” Zacu said. “In order to protect the indigenous peoples of Bolivia, we need more than just regulations. We need to raise the level of awareness and we particularly need to provide ongoing health care, instead of responding to emergencies, such as the threat of extinction.”

Zacu reinforced the need for broad public awareness campaigns that include indigenous peoples.

“Some of them are ashamed of being indigenous,” he said. “We’re about to become extinct. We can’t stand back and let this happen. We need to get back in touch with our roots.”

Bolivia is a global leader in terms of indigenous participation in the decision-making process, particularly at the political level, Anders Johnsson, the secretary general of the Inter-Parliamentary Union (IPU), said during his Aug. 21 visit to La Paz.

“There are very few indigenous parliamentarians in the world. Bolivia has the largest amount – over 30% (of the 130 members of the Lower House). In most countries, just one would be a lot,” he said at the close of the fourth general meeting between IPU members and the Chamber of Deputies in Bolivia.

(Featured Photo: The Bolivian Legislature has the highest level of indigenous representation in the world. Indigenous customs are practiced regularly in the Chamber of Deputies. Jorge Quispe for Infosurhoy.com)

Bolivia, indigenous, legislation
Previous Post Important Issues to U.S. Hispanics: Add sea level rise to the list
Next PostIntrn'l Video: A tale of two sisters not meant to succeed in life but find a way as "Hermanas de Fé"

Important Issues to U.S. Hispanics: Add sea level rise to the list
Comment
Intrn'l Video: A tale of two sisters not meant to succeed in life but find a way as "Hermanas de Fé"