LatinaLista — There’s no denying that Che Guevara has an interesting impact on U.S. Latinos. Cuban Americans, who know Guevara’s history with Fidel Castro, consider him a traitor and a killer. Other Latinos who only know the iconic figure through film and t-shirts sporting his image, think of him in a more romantic and heroic light. 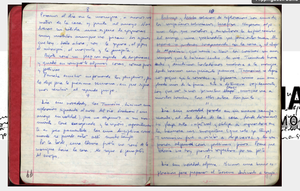 Yet, the man whom the CIA described as “fairly intellectual for a Latino,” wasn’t just an observer and a participant — he was also known as a writer, and a diarist.

Che Guevara’s diary has been published in numerous languages over the years and was even ‘cleaned up’ by the Cuban government when they published the contents of it after receiving it after his death. Yet, for the first time, the diary will be seen as Guevara left it — not in some museum but online.

Carlos Soria Galvarro, an author, who has written extensively on the life of Che Guevara when he was in Bolivia, released this week the diary on his website.

“The goal is for a historical document to be within everyone’s reach,” Soria Galvarro said. “And the Internet makes it possible for everyone to know what happened 45 years ago.”

The diary, in the original red notebook and written in blue ink, covers January to October 1967. Guevara was killed on October 8, 1967 by Bolivian troops.

Soria Gavarro said that with the exception of adding accent marks that were absent in the original diary entries, there have been no other changes made to the text.

The online diary provides for some eerie reading. Not because of what is written or that it is in Guevara’s own hand but because the pages automatically turn themselves in quick succession, unless controlled by the reader. With each page turn, one can’t help but sense the impatience of a man who had no patience for the world that didn’t see things his way.