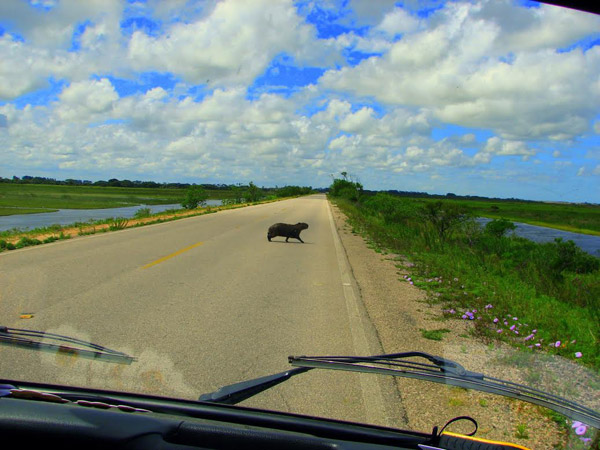 LatinaLista — Signs of progress are pretty easy to spot in urban areas — glassy high-rises, trendy new restaurants, bumper-to-bumper traffic. Aside from the occasional pedestrian-car entanglement, city progress usually doesn’t involve too many casualties. It’s a different story outside the city.

In the same push for progress, new housing and roadways are being built the world over, invading the heart of local animal kingdoms. Too often this kind of progress is pushing out the animals — right into the path of speeding cars. The result is roadkill.

The frequency of animals found splattered along highways has scientists alarmed throughout the world. In the United States, it’s estimated that 1-2 million animals are hit on U.S. highways every year. To help scientists collect data on the roadkill — causes, species affected, time of year most deaths occur, roadkill hotspots — the Adventurers and Scientists for Conservation created an app so sports enthusiasts on their daily runs, walks or bike rides can easily report a roadkill find.

In Brazil, roadkill is an even bigger problem.

According to an estimate by Centro Brasileiro de Ecologia de Estradas (CBEE) (the Brazilian Centre for the Study of Road Ecology), over 475 million animals die every year in Brazil as a result of being a victim of roadkill. That’s 15 animals killed per second on Brazilian roadways.

Brazilian biologist Alex Bager, founder of the CBEE, doesn’t see the issue as being so much a loss of Brazil’s animal life but more as a dire threat to the country’s biodiversity. Though over 90 percent of the roadkill are small — birds, turtles, amphibians, with 9 percent medium sized animals, a full one percent of the total, or five million, are large animals including cougars and jaguars.

To combat Brazil’s rise in roadkill, Bager has also created an app to report cases. In the process, he is creating a generation of citizen scientists on a mission to save 400 million animals.

The app, Urubu mobile, is a play on words since Urubu in Portuguese means black vulture, an animal that looks for carcasses. Six thousand use the app to report roadkill by sending a photo. The site is narrowed down with GPS. The data is then analyzed by a team of five scientists who pinpoint the exact location and plot it on a map.

It’s Bager’s hope that as a result of the data collected new legislation will be drafted to safeguard the country’s wildlife.

In an interview with Mongabay, Bager said:

“We are already working with government bodies and three members of the federal Parliament in the capital, Brasilia, to create a new bill,” he said. “There are currently no federal laws regulating what studies need to be done and what measures implemented to reduce the impact of roadkill. We also want to set up a special biodiversity fund to tackle the problem.”

Bager feels the rise in roadkill is like a ticking time bomb. It’s just a matter of time before whole species are lost in the name of progress — setting back biodiversity for all time.

Featured Photo: The largest rodent in the world known as the capybara crosses a Brazilian highway. Photo by Alex Bager.