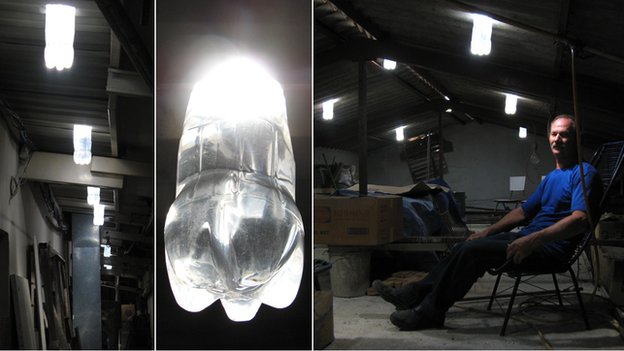 UBERABA, Brazil – Mechanic Alfredo Moser said that once he met famous Spiritist leader Chico Xavier on the street in the city of Uberaba in the Brazilian state of Minas Gerais.

They talked a little and, in parting, Xavier put his hand on Moser’s head and said: “You will have light in your life, but this light will not be yours alone. It will belong to the people.”

Whether or not it was a prophecy, the fact is that years later Moser became known for inventing a daytime lamp.

Known as Moser Lamp, the invention uses recycled materials and does not need electricity to run. Given its low cost, the Brazilian lamp is bringing light to thousands of poor families worldwide.

The idea is very simple: Fill a two-liter plastic bottle with water and fit it into the roof, allowing part of it to receive sunlight.

The refracted sunlight is equivalent to a 40-60 watt bulb, even when it rains.

“We add two capfuls of bleach so the water doesn’t get dirty and change color. It needs to always be crystal clear,” said Moser, 60. “We also put a black film canister or something similar on the lid so that it doesn’t get damaged by the sun.”

Another tip from the inventor is to use light colors when painting the walls, to better reflect the light.

Moser got the idea in the early 2000s when he was looking for a solution to get around the energy rationing and blackouts taking place in Brazil. Moser recalled a conversation he had with coworkers when a plane crashed in the Amazon in the 1970s.

“We asked ourselves how we would survive in the jungle without a match,” he recalled. “My boss at the time said that if you put water in a clear container, the reflected sunlight could be used to set fire to a pile of dry grass or some paper.”

Moser applied this principle to his invention and found a solution for lighting his home and office during the daytime blackouts. Soon afterward, the owner of the neighboring pizza shop also adopted the idea.

“He was worried that the customers would be freaked out by plastic bottles hanging from the ceiling but they liked it,” Moser said.

News of the invention spread throughout the city and Moser was featured by a local TV station. Moser was invited to install 24 lamps at the Chico Mendes Ecological Park, a 61,600 m² area in São Paulo.

In 2011, the light bottles went global after being adopted by MyShelter, a foundation in the Philippines that specializes in alternative buildings. According to the MyShelter website, 20 million families in that country have no access to electricity.

The campaign was dubbed “A Liter of Light” and surpassed the mark of 120,000 residences in the Philippines last May. The foundation also took the invention to dozens of other countries, such as Peru, Colombia, India, Indonesia, Bangladesh and Cambodia. The goal is to reach a million homes throughout the world by the end of 2015.

“[The Brazilian] government should make an investment and call more attention to this invention,” said Ademar Bernardes Júnior, 47, who installed 20 Moser Lamps in his supermarket in Uberaba. “This mechanism could provide huge returns to the country in terms of protecting the environment and conserving electricity.”

Since Moser never patented the product, he hasn’t been compensated for his invention.

“Doing good things for others is the greatest reward,” he said. “My father died at 90 years old, very proud of my invention.”

Moser never has visited the countries where his invention is being used. He has flown only once, when he went to the interior of the state of São Paulo state to receive an award.

An inventor admired by Moser is the creator of the electric light – American inventor Thomas Edison. Like the idol, Moser created other things: chairs and brooms made from recycled polypropylene tapes; a candle holder made from plastic bottles that protects the hands of worshippers in processions; and a Christmas tree made from recycled material.

“Moser has always been very creative,” said Moser’s wife, Carmelinda, 65. “When we first got married, he built our table, bed and closets out of wooden crates. When times were tight, we sold everything. We even sold our wedding rings.”

Moser lives off of his workshop and the rent from properties he built on the land around his home.

“With all of his creativity, he would have done a lot more if he had gone beyond elementary school,” Carmelinda said. “But our son [Samuel, 27, who also is a mechanic,] has enrolled in college.”

Brazil, electricity, invention, light
Previous Post One Texas Latino Republican 'on a path' to change nation's political discourse
Next PostVideo: Conquering inner demons is a matter of 'drawing out' emotions

One Texas Latino Republican 'on a path' to change nation's political discourse
Comment
Video: Conquering inner demons is a matter of 'drawing out' emotions