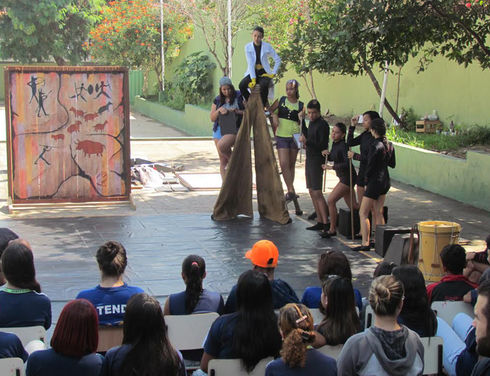 SALVADOR, Brazil – The city of Contagem in the state of Minas Gerais has the sixth-highest murder rate among people between the ages of 15 to 29, according to the 2014 Violence Map.

To address the problem, the United Nations Office on Drugs and Crime (UNODC) and the Ministry of Health are combating the violence caused by narco-trafficking and drug use throughout the region of Belo Horizonte – the state capital – through the Vivajovem.com project, which started through a partnership with the Ministry of Culture in 2012.

“The project prioritizes actions for urban areas in municipalities with high rates of juvenile homicides and a high prevalence of alcohol and other drugs, as well as border areas,” said Nara Santos of the UNODC Health and Development Program in Brazil.

The project selected 16 proposals from the 225 that were submitted in a competition, awarding each winning entry between R$100,000 and R$300,000. Activities began in January 2013 and should be completed by January 2015.

Vivajovem.com programs focus on preventing violence and substance abuse, as well as training spokespersons who want to spread Vivajovem.com’s positive messages throughout the community.

Amanda Silva, 17, whose 25-year-old cousin was killed a few years ago by drug dealers with whom he was involved, is among a group of 13 teenagers who have shared the consequences of drug abuse with Contagem residents since October.

Their work was performed through the medium of theater, specifically the Trama Theater Group, one of the organizations participating in the Vivajovem.com project, which despite its name, doesn’t have a website.

The play Reflexes and Reflections, performed by young actors trained by Trama, has as its venue an advanced research lab, where the role and use of drugs throughout human history are studied. Through a time portal, the actors experience scenes from the past, present and future as they complete their mission of chronicling the history of drugs in society.

The show culminated five months of training, during which the teenagers held discussions with health and safety professionals, including a psychologist, a physician and a military police officer. They also took classes in body language, dramaturgy, scenery and costumes.

“We didn’t have a script ready to be presented by the teens: It developed out of talks based on their experiences related to drug use,” said Carlos Henrique, the play’s director and one of Trama’s founders.

Reflexes and Reflections was presented in youth cultural venues in Contagem from April to July.

“I was very nervous when I saw the audience at first, but everything worked out,” Silva said, referring to her April 10 debut. “Drug use is a controversial topic that needs to be discussed. I will do whatever it takes to make a difference in the life of someone caught up in drugs, because I know what it means to lose someone because of that.”

Like Silva, another cast member Luana Rosa, 15, feels a responsibility to help those who want to break away from drugs.

“In the talks we have had here, I have seen the serious consequences of drug abuse,” Rosa said. “Audience members end up physically and emotionally identifying with the characters in the play who have been impacted by drugs.”

“Our intention was mainly to sensitize the public and help people reflect on the causes and consequences of drug use without just pointing fingers,” he added. “But the group also did its own reflecting, and today we are seeing a big change among the participants.”

The first run of Reflexes and Reflections closed on July 29 before an audience that included students from Contagem’s public elementary and secondary schools.

To build upon this success, the play’s producer, Patrícia Matos, plans to continue the project pending successful fundraising efforts.

(Featured Photo: The play “Reflexes and Reflections,” which explores the role of drug use in human history, was presented by the Trama Theater Group at cultural centers in Contagem in the state of Minas Gerais from April to July. (Courtesy of Patrícia Matos)