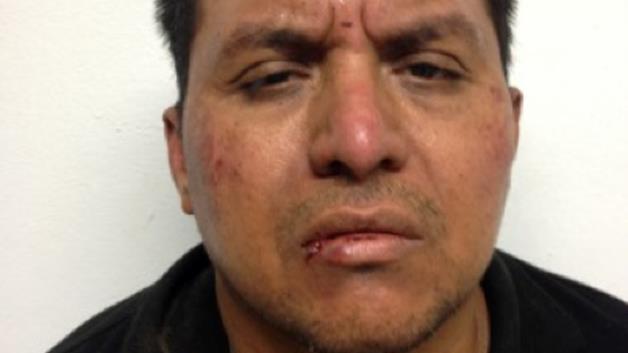 The capture of the Zetas leader Miguel Treviño, alias Z-40, may mean more violence in the near term as his minions fight for the most coveted brand name in Mexico’s underworld and his rivals move into his areas of influence.

Treviño was captured at 3:45 a.m. Monday morning by Mexican Marines in the town of Anahuac, 27 kilometers southwest of Nuevo Laredo, without firing a single shot, the government said. He had $2 million in cash and eight weapons on him at the time. Two other alleged Zetas were captured during the stealth operation that involved ground troops and a Navy helicopter.

The government showed a photo of a bruised and chafed man who it said was the Zetas maximum commander. Treviño, who took over the Zetas last October, is wanted for numerous criminal acts in Mexico and the United States, including a double homicide and money laundering in the United States, and the murder of some 265 migrants in northern Mexico during 2010 and 2011.

The capture is the most important since Enrique Peña Nieto became president in December 2012, and may validate his slightly less confrontational approach with criminal organizations.

Nuevo Laredo military personnel recently told InSight Crime that they were doing more focused strikes, rather than the widespread patrols and road blocks they employed during the previous administration of Felipe Calderon. The strategy appears to be nationwide, although it was the Mexican Navy’s Special Forces, the same go-to guys under the Calderon administration, which captured Treviño.

The battle amongst these criminal groups and the state during the Calderon administration left 65,000 dead and has already left close to 10,000 dead in this administration, many of them in Treviño’s area of influence in northern Mexico.

However, the capture may have the opposite effect than what most expect. While Treviño was known for his brutal beheadings and gruesome executions of those who were “not aligned” with the Zetas, and he had consolidated his hold on the organization in recent months, his capture may open the door for a full-scale battle for his territories by both the Zetas and their rivals.

Beginning in 2010, the Zetas, the armed wing of the Gulf Cartel, split from their progenitors and began a bloody fight for the northeastern corner of the country.

The Sinaloa Cartel joined the Gulf in its fight to unseat the Zetas from their turf, which stretches from the states of Tamaulipas west to Coahuila, and south into Durango, Veracruz and Quintana Roo. The Zetas also have a strong presence in parts of southern Mexico and into Guatemala.

The Zetas also face internal battles. In 2011, fissures emerged as factions accused one another of selling out the other. The death of the group’s number one, Heriberto Lazcano, in October 2012, exacerbated these tensions and led to the emergence of several splinter cells.

Treviño had done much to consolidate his hold on the organization in recent months, but his capture will reopen the possibilities for his internal rivals to go after the top spot. Although Treviño’s brother, Alejandro, alias Z-42 or “Omar,” is the presumed number one, it is not clear that he has the gravitas or the ability to hold this disparate and volatile organization together.

To be sure, Miguel Treviño may have been the final stitch that held what was left of this disparate federation together. What comes next could be a spasm of violence as the group balkanizes. In many ways, the Zetas are following a larger trend in Mexico, and indeed the region, of fragmentation. Large scale, vertically integrated organizations are going the way of the dinosaur.

The Zetas are a strange hybrid organization that has a diverse financial portfolio and an insatiable appetite for territory. It is from this territory the organization draws most of its strength, collecting “piso,” or a tax, from other underworld organizations ranging from pirated goods to prostitution to drug trafficking.

The highly focused military model and the low barriers of entry for many of these various criminal activities are what give them the ability to expand quickly, but they also make for internal instability.

What’s more, the Zetas own drug trafficking activities are limited. Internal financial ledgers of the organization obtained by InSight Crime show a group that buys small quantities of cocaine in Guatemala and other parts of Central America, and spends high amounts on personnel and weapons.

Still, the Zetas’ most coveted prize is undoubtedly Nuevo Laredo, which sees 10,000 to 12,000 trucks passing through it a day, a natural camouflage for the Zetas to move their drugs. But the city has been in dispute of late. It saw its highest number homicides on record last year at 288, making it the eighth most violent city in the world, according to a Mexican watchdog group.

The carnage may have been worse than reported: sources close to the mayor’s office told InSight Crime that authorities had recovered close to 550 bodies during what was an all out war between the Zetas and their rivals in the Sinaloa and Gulf Cartels, which included rocket-propelled grenades and regular gunfights on the city’s streets.

Treviño grew up in Nuevo Laredo and had moved up through the ranks of the local criminal organizations from gopher to mid-level management by the time the Zetas arrived in the city in 2000. He quickly crossed over, and he and his brothers, most notably Omar, became invaluable assets as the Zetas took control of the city, then fought off rivals in several years of bloody battles in the mid-2000s that bled into Nuevo Laredo’s sister city, Laredo, on the United States side.

It was, and remains, one of the few real cases of spillover violence into the US. An indictment in Texas stemming from this period accuses Treviño and others of several murders and drug trafficking.

Treviño integrated other parts of his family into the business as well, including his brother Jose and his uncle, Eduardo, both of whom laundered money for him in the United States. Both were also captured and prosecuted in the US. Jose is awaiting sentencing following a trial in Austin, Texas, in April, which found him guilty of moving millions via the collection and racing of horses.

Miguel Treviño may soon be joining them in a US prison, as the US government will undoubtedly seek his extradition.

drug cartels, Mexico, Zetas
Previous Post Latina at the wheel: Changing NASCAR one race at a time
Next PostIntrn'l Video: A Caribbean oasis on its way to extinction

Latina at the wheel: Changing NASCAR one race at a time
Comment
Intrn'l Video: A Caribbean oasis on its way to extinction