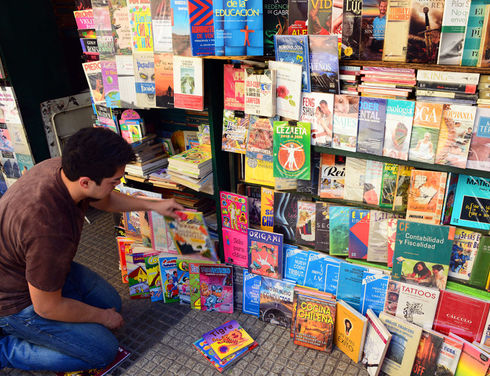 Books on medicine, psychology and finance are favored by groups involved in intellectual property crimes.

SANTIAGO, Chile – Criminal groups involved in book piracy in Chile use a structure similar to that used by narco-traffickers.

“This is a crime that focuses on clandestine markets, though sales in formal outlets also have been detected,” Néstor González, the head of the Crime Investigation Brigade of Intellectual Property (BRIDEPI) of Chile’s Investigations Police (PDI), said. “Strip malls and book fairs are the most frequent points of sale for pirated material.”

BRIDEPI seized 362,752 books valued at US$1.5 million between 2011 and 2013. While literature and children’s books remain the genres most pirated nationwide, this year police have detected an increase in the pirating of textbooks specializing in medicine, psychology and finance destined for student and professional markets.

Professor Yanira L.G., 51, and her 22-year-old daughter, Camila S.L., were arrested with 22 falsified copies of Frank Netter’s Atlas of Human Anatomy, which they were selling outside a Metro station in Santiago, in March.

Both women face charges of infringement of Intellectual Property Law 17.333 and could be sentenced to between 60 and 541 days in jail in addition to fines between US$715 and US$75,000.

Atlas of Human Anatomy is the main textbook used in health-related studies in Chilean universities, and 34 pirated copies have been confiscated so far this year.

The copies seized in March were introduced illegally from Tacna, Peru. As with drug trafficking, human couriers – known as “mules” – strap the books to their bodies to avoid police controls, according to Roberto Villarroel, BRIDEPI’s deputy commissioner.

The pirated version of the book costs US$35, while the original sells for US$200.

“[Pirated books] are terrible copies of the originals,” said Felipe Hernández of the Criminology Laboratory of the Carabineros de Chile (LABOCAR). “Because they are handmade, the quality of the printing, paper and binding are very poor. There are often missing pages or they fall apart when you open them.”

“Even a basic home or office printer can be used to copy books,” he said.

Between January and May, 14 people were detained for pirating books, compared to 23 in all of 2013.

“These people have a very unfair competitive advantage which is difficult to combat,” said Arturo Infante, the president of the Chilean Chamber of Book Commerce, an organization composed of 87 Chilean publishers. “The pirate is like a privileged partner who doesn’t pay publishing rights, license fees or taxes but still manages to make a profit.”

As a preventive strategy against book pirating, the PDI, in collaboration with the Chilean Chamber of Book Commerce, launched a campaign titled “Buy original, Buy safe” last February. The campaign, which is aimed at colleges and universities, stresses the overall importance of buying original products.

“[We want the] community to be aware of the problems surrounding the purchase of pirated products in terms of overall quality, picture quality, durability, true cost, safety, and even health,” Deputy Prefect Hugo Pérez Echeverría, the head of the PDI’s Economic Crimes Division, said. “For this reason we are calling on people to help protect the rights of the authors, that way we are assisting the development of the country.”

The campaign’s recommendations include:

“[An original book can be identified at a glance] because the cover images and colors are very clear and defined, the same as the inside, and the text should never be blurred. The paper should feel stiff to the touch,” González added.

“[Piracy] is highly prejudicial to both the publishers and the pirated authors. It has become accepted as something inevitable, but it diminishes both the material and intellectual property value of the books concerned,” he added. “In addition, it has extended to the university photocopy market and the trafficking of PDF files. This is why we support the ‘Buy original, Buy safe’ campaign and we hope the general public will take their recommendations on board and help put an end to this illicit activity.”

(Featured Photo: The counterfeit and forgeries market has expanded to include the piracy of expensive books, which are transported using drug-trafficking methods such as human couriers, according to Néstor González, the head of the Intellectual Property Brigade of the Chilean Investigations Police (PDI). Gustavo Ortiz for Infosurhoy.com)