The Choke Point: The DEA Attacks ‘El Chapo’ in Chicago 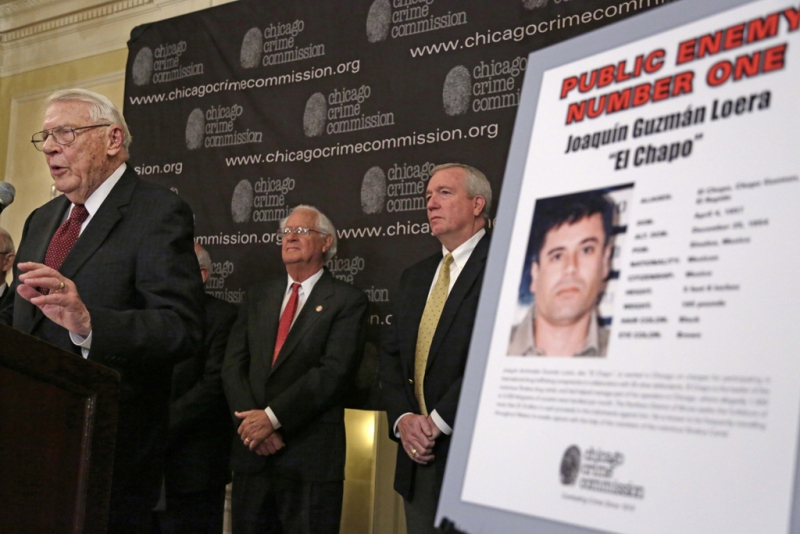 By Charles Parkinson
InSight Crime: Organized Crime in the Americas

While Chicago battles a heroin epidemic, US law enforcement has focused its efforts on attacking the link between the street gangs running sales and their Mexican suppliers in the Sinaloa Cartel. The only problem: it’s the most difficult part of the chain to identify.

Heroin use is booming in the Chicago area. A US Justice Department report (pdf) says heroin seizures increased three-fold between 2005 and 2011, and that heroin-related emergency room visits were more than three times the national average.

According to Berlin, there were 57 heroin possession cases this year, compared to just five cases three years ago.

Rising purity levels and new methods of consumption — both powdered and smokeable forms — have helped make heroin the drug of choice in some areas, including in highly prized markets in the suburbs of the city.

“There’s no needle involved so there’s no fear of contracting AIDs or hepatitis and it really has attracted a completely different user base,” said Jack Riley, Special Agent in Charge for the Chicago Field Division of the Drug Enforcement Administration (DEA).

The use mirrors a nationwide trend with the drug. According to a Roosevelt University in Illinois study (pdf), which compiled data from various US surveys, the number of users has increased, the average age of the user has decreased, and drug treatment clinics have received a higher percentage of heroin users than a decade ago.

In Chicago, this has been popularly attributed to Joaquin “El Chapo” Guzman. Guzman was designated Chicago’s “Public Enemy Number One” in February, the first person to hold that honor since the Chicago Crime Commission famously handed it to Al Capone in 1930.

“Chapo is a marketing genius and he always has been,” Riley said, referring to the smokeable and snortable forms that are driving consumption.

For Riley and others, Chicago has become the distribution center for the Sinaloa Cartel’s US drug network.

“This really is a trans-shipment point,” explained Joseph Ways, Executive Director of the Chicago Crime Commission. “We were already well aware of his [Guzman’s] importance to the Chicago drug trade, but I don’t think anyone from outside the immediate Chicago area could fully appreciate the impact that he was having not only on Chicago’s violence and drug trade, but on the drug trade of the surrounding communities.”

“Guzman is a very bright individual,” he added.

While the depiction of Guzman as an all-powerful puppet master may be somewhat simplistic — court documents from an ongoing trial in Chicago underscore how he heads one of a number of semi-independent factions that form the Sinaloa Cartel — the organization’s stranglehold over Chicago’s wholesale heroin trade is clear, say these law enforcement agents.

According to the DEA, the Sinaloa Cartel controls up to 80 percent of the drug flow into the city, and Chicago has become the fulcrum of a distribution network stretching throughout the Midwest and beyond, which they claim is fueling the growth in heroin use.

“It’s important to Sinaloa and the other cartels for the same reason Fortune 500 companies are here: logistics,” says Riley, who highlights how the Sinaloa Cartel has established its footing in Chicago by securing the west Texas transport corridor, after a winning a bloody war for control of Ciudad Juarez in 2012.

The DEA’s job to combat the Sinaloa Cartel in Chicago is made hard by the way it organizes itself.

“First of all, its very fluid and you need to understand when we lock people up we don’t get a membership card to say they are a member of Sinaloa,” Riley said.

According to Riley, the Sinaloa presence in the city exists purely to oversee the wholesale movement of narcotics and money, with different cells responsible for only one of the two, so they cannot both be recovered if authorities make a bust.

But for all of the cartel’s ingenuity in managing the drug supply, to get them onto the streets requires interaction with the city’s gangs, a point of contact law enforcement here calls the “choke point,” which is the most vulnerable link in the chain and the focus of the DEA’s operations.

According to Riley, attacking the choke point is a strategy he first tried during a 2007 to 2008 stint at the DEA’s El Paso Division, a time at which nearby Ciudad Juarez was becoming engulfed in the war between the Sinaloa and Juarez criminal groups.

“I put it together when I was on the border because I thought if we continued to work on both ends, we’d never get to the middle, and we would never really fully know the extent of the organization,” he said.

To carry out the strategy in Chicago, Riley has assembled a multi-agency strike force — a job he says was so important it prevented him taking early retirement in 2012. It has been so effective, the model is being trialed in Los Angeles and Boston.

“It basically takes our limited resources, intelligence driven, and works our investigation from the middle out, so we can do something on the street but we can also continue to work it up [towards the cartel],” he said.

But finding a choke point is difficult since it can take many forms: legitimate businesspeople, career criminals, accidental acquaintances, blood relatives of gang or cartel members who are not directly involved in the daily running of the organization, or older gang members who have moved away from the violence of the city and into the suburbs — such as in the case of Dana Bostic.

Bostic, who was chronicled in this Chicago Reader breakdown of the heroin trade, headed up a large distribution ring in the city. Riley calls him “the poster boy for the choke point.”

The penitentiary system is another source for such connections, and Riley says Cook County jail — located three miles southwest of the city center — is “a melting pot for the choke point.”

According to Robert Lombardo, Associate Professor of Criminology and Criminal Justice at Loyola University and an expert on the city’s gangs, the prison system can be an effective breeding ground for such connections because it allows trust to be built up between disparate elements of the criminal underworld, who would often suspect outsiders of being informants or undercover police officers.

“A gang member and a guy with a cartel connection are in prison. [These] guys did seven or eight years in the same cell block and once [they] get out [they] can do business, because an undercover policeman is not going to do seven or eight years,” he explains.

For Riley the key to identifying the choke point is through effective communication between federal agencies and local police forces, something he says has vastly improved in recent years.

“I feel good about what we’re doing,” he said. “I know we’re targeting right, we’re having long lasting effects when we do take stuff down, and from our cases we’re sending leads all over the country, and that’s what I want to see.”

But while the strategy Riley designed is spreading, the flood gates remain open. This year Dupage County saw 45 heroin overdose deaths up to December 2013 and 43 such deaths in 2012, figures unheard of three or four years ago.