Colección Luna: empowering Mayan women, one stitch at a time 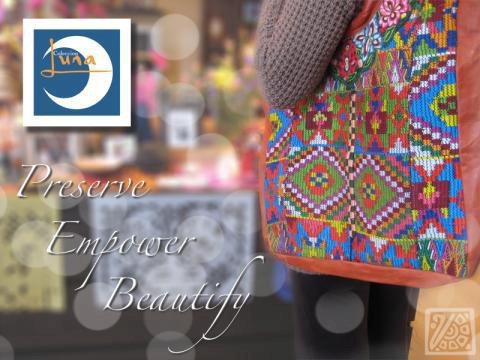 Almost everywhere you go in Guatemala you are greeted by Mayan textiles. In the country’s rural highlands: men, women and children dress in the traditional traje of their pueblo and go about their daily chores. While in the cities: restaurants and houses are adorned with intricately woven indigenous designs.

Guatemalan textiles have become famous throughout the world; however, the majority of the Mayan women who create them live in extreme poverty. Many Mayan girls drop out of school during third grade, marry young and have large families, which puts a strain on their already limited resources.

Stephanie Jolluck first came to Guatemala in 1997 to volunteer with a women’s cooperative. The country’s 36-year civil war had just ended, leaving a bloody legacy of approximately 200,000 people dead and 40,000 disappeared.

“I spent three weeks giving my time and energy to an NGO that helped empower indigenous women who had survived the violent civil war. The strength and resilience that these women displayed after they had witnessed such horrors during the war had a profound impact on me,” says Jolluck.

“I then backpacked alone for two months and rapidly fell in love with the rich and vibrant colors of Guatemala’s textiles and other handicrafts. I explored the country, and the anthropologist and designer in me grew amazed at the 2,000-year-old textile tradition that was slowly disappearing. I couldn’t bear the thought of this beautiful tradition going extinct and wanted to share it with the world.”

Shortly after returning to the U.S., Jolluck gave up her job as a high school Spanish teacher and decided to create Colección Luna, at the age of 26, in an effort to alleviate poverty, preserve Guatemala’s textile tradition and empower women.

Working with a women’s cooperative that employs around 100 people on the shores of Lake Atitlan, 150km from Guatemala City, Colección Luna sells handbags, accessories and beaded jewelry to customers all over the world using reclaimed indigenous clothing and fair trade practices.

“I travel four to six times a year to the highland region of Guatemala, working directly with the artisans on my designs. The line of textiles is created from reclaimed Mayan indigenous clothing: huipiles (blouses), cortes (skirts) and fajas (belts) that are hand-woven or hand-embroidered.

“It’s a true partnership: using their ancient techniques along with my modern designs to sell to the Western market. They’ve come up with some amazing designs and ideas for new products too and I’m always open to that!”

Weaving together ancient traditions and contemporary pieces such as iPad covers, smart phone cases and yoga bags, Colección Luna doesn’t just share the Mayan culture with its customers overseas, it also tries to educate them on the importance of fair trade and female empowerment.

“It’s been amazing to see and hear how consumers are becoming more socially conscious about their buying decisions. When my business started in 1999, you rarely heard the words ‘fair/direct trade’, ‘women’s empowerment’, ‘sustainability’, ‘eco-friendly’ – things that I focused on when I began Colección Luna. I love that these words are now recognized and that consumers care about the how, where and why of Colección Luna.”

Lidia Agarre and her husband have worked with Jolluck since the business first began: sourcing fabrics, developing products and working with the weavers in their village of Pazite, Quiche. Coming from a family of artisans, Lidia used to sell her designs at Chichicastenango, Central America’s biggest market, but says that business was unpredictable.

“Stephanie has helped us a lot. The economy has gone down a bit, but Stephanie is always opening up new markets so we still have work. Employees earn more than they used to at the market and they work when they can. Some of them have to attend to the maize harvest so we work around that,” says Agarre.

Since working with Colección Luna, Lidia and her husband have seen their standard of living improve and have been able to buy a small plot of land and a house.

“We’ve had some difficult times, but thanks to our jobs we were able to afford hospital bills. We live better now: we can send our daughters to school and afford food,” says Agarre.

Last month Jolluck was announced as a “Leg Up” winner by SPANX, a hosiery company that runs a program to raise awareness of female entrepreneurship.

“On the morning of the announcement I was on a plane headed to Guatemala to work with my artisans. It was so wonderful to share [the news] with them because, as my partners, it was their award too,” says Jolluck.

Colección Luna recently partnered with the African musician Emmanuel Jal and his “We Want Peace” campaign to empower indigenous Mayan women, build schools in South Sudan, and spread the message of global peace.

“I love that with Colección Luna I can empower women in Guatemala as well as help build schools in South Sudan,” says Jolluck.