Colombia: A library carved in stone 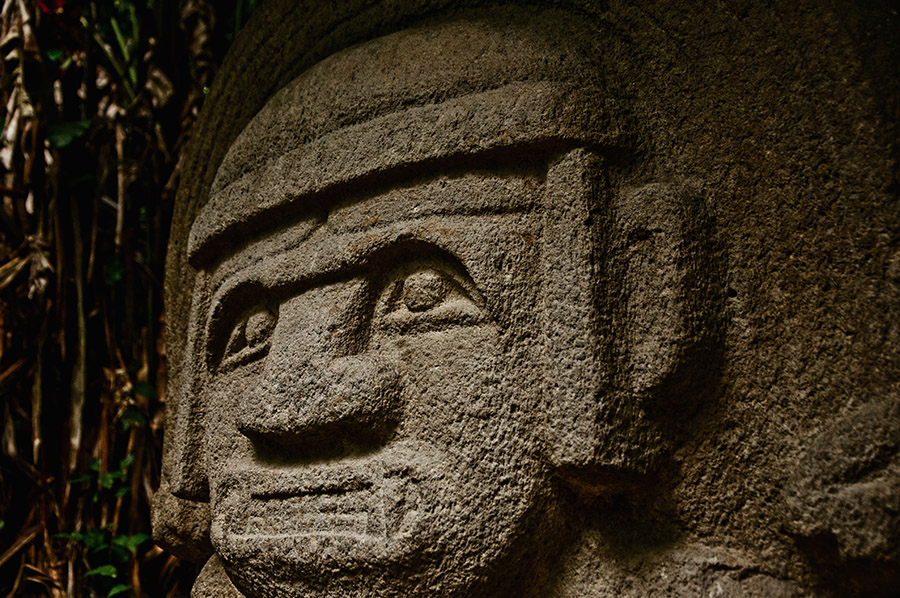 SAN AUGUSTÍN, Colombia – About 1,000 years ago, among the rugged and lush mountains where Colombia’s major rivers were born, a culture whose name remains unknown sculpted hundreds of stone monuments. These sculptures were buried with the deceased, remaining hidden for centuries.

The archaeological treasure of San Agustín, whose name comes from the closest village, is about four kilometers from the epicenter of the findings. It includes more than 500 statues discovered along the Colombian Massif. It’s the largest collection of megalithic sculptures from pre-Columbian South America and was declared a United Nations Educational, Scientific and Cultural Organization (UNESCO) World Heritage Site in 1995.

“It’s an enormous library carved in stone, which contains the worldview of a deeply spiritual people who developed in a place of astonishing beauty,” said American archaeologist David Dellenback, who has pursued the monuments’ mystery for 40 years.

Dellenback, who made an open, overland journey through Central and South America in the 1960s, saw the pyramids of the Mayan and Aztecan cultures, the immense Inca nation built in stone over hundreds of kilometers of the Central Andes and the first traces of Andean civilizations along Lake Titicaca.

However, it was the stones of San Agustín that most captured his attention.

The place became his home.

His fascination with the sculptures led him to explore unthinkable paths, mostly among the rolling hills, waterfalls and streams that descend from the prominent Colombian Massif – an imposing knot of mountains in the Andes – to the Magdalena River, which stretches for 1,450 kilometers and flows into the Caribbean Sea.

All of the statues that have been registered are different from one another, and it is possible that many others remain buried in the region’s forests and canyons.

Dellenback has made drawings of 470 statues that he has seen firsthand. Most of the drawings were published in a 1,000-page catalogue, of which only 20 copies were printed.

He provided copies to libraries at major universities focused on archeological research in the United States and to the Luis Ángel Arango Library in Bogotá, Colombia.

“[The sculptors’ work] reflects a deep respect and reverence for death,” said archaeologist Fabián Sanabria, director of the Colombian Institute of Anthropology and History (ICANH). “This also implies a profound respect for life, which is incredibly important for a country that has been debating violence for so long.”

Every researcher who has passed through San Agustín during the last 150 years has found pieces of the intricate puzzle behind the history of the people who created the sculptures.

A hearth found in Alto de Lavapatas that underwent Carbon-14 dating shows the region already was inhabited in the year 3,300 B.C.

Similar studies show the monuments were made between the years 200 and 800 A.D., a period during which the sculptures’ creators flourished, only to vanish prior to the arrival of the Spanish, without leaving a single clue as to their disappearance.

“There is evidence they may have migrated to the Amazon region, and we want to carry out new digs in order to find any traces they left,” Sanabria said.

Seemingly, stone was reserved for the creation of monuments in this early culture, as there are no traces to indicate it was used architecturally. The homes and ceremonial temples were built with perishable materials, such as wood, clay and straw, in a circular manner and on a small scale.

The sculptors created each monument from a single rock, despite the weight, which often reached several tons. They carved mostly volcanic rock – found several meters below ground or deep in canyons – using rocks of higher density as chisels. No evidence has been found indicating that metal instruments were used.

At the time of the Spanish conquest, the conquistadores passed along the Colombian Massif without noticing the statues. Their focus was on the promise of gold in El Dorado, a legendary treasure trove that was said to be hidden farther to the north.

In 1757, during a trip between Putumayo and Santafé, which is now Bogotá, Friar Juan de San Gertrudis followed the rumors about the monuments and found “five Indian houses” and dozens of carved stones, which he described in strong terms in his diary.

“They are the work of the devil,” he wrote. “The Indians did not have iron or instruments to produce such a thing.”

Given there was no gold in the region that’s now San Agustín, it would be a while before new visitors arrived.

In 1857, geographer Agustín Codazzi, during his explorations to discover the source of the Magdalena River, made the first detailed descriptions of the statues. His work attracted the curiosity of several European archaeologists, including Germany’s Konrad Theodor Preuss, then the director of the Ethnological Museum in Berlin.

Preuss visited the region for three months between 1913 and 1914. During this time, he removed 36 statues and hundreds of other pieces, which were exhibited in the spring of 1923 in the courtyard of the former Museum of Arts and Crafts in Berlin.

The pieces were compared to the famous treasures of Tutankhamun, found a year earlier in Egypt, Sanabria said.

International recognition led the Colombian government to establish the National Archaeological Park in 1935 and support the work being carried out in the region.

Since 1943, during the course of 40 years of hard work, hundreds of tombs were opened, reconstructed and preserved in the vicinity of the towns of San Agustín and Isnos, under the direction of Colombian archaeologist Luis Duque Gómez, along with the help of other scholars and hundreds of rural residents.

Since then, thousands of curious travelers and experts have visited the region, attracted by the enigmatic figures and beautiful landscape. During the last year, the San Agustín Archaeological Park has received an average of 8,000 tourists a month from throughout the world.

How to get there

San Agustín is 520 kilometers south of Bogotá in the department of Huila. The highway is well maintained and features beautiful scenery.

The route from Bogotá includes the Tatacoa Desert – one of the best astronomical observatories in Colombia – and the Rivera hot springs, as well as several overlooks along the Magdalena River.

San Agustín has hotels for all tastes and budgets, as well as travel agencies that organize trips by horseback to the archeological sites and natural attractions, in addition to adventure tourism options.

(LatinaLista Editor’s Note: To see a slideshow of the sculptures, click here to go to the original story.)