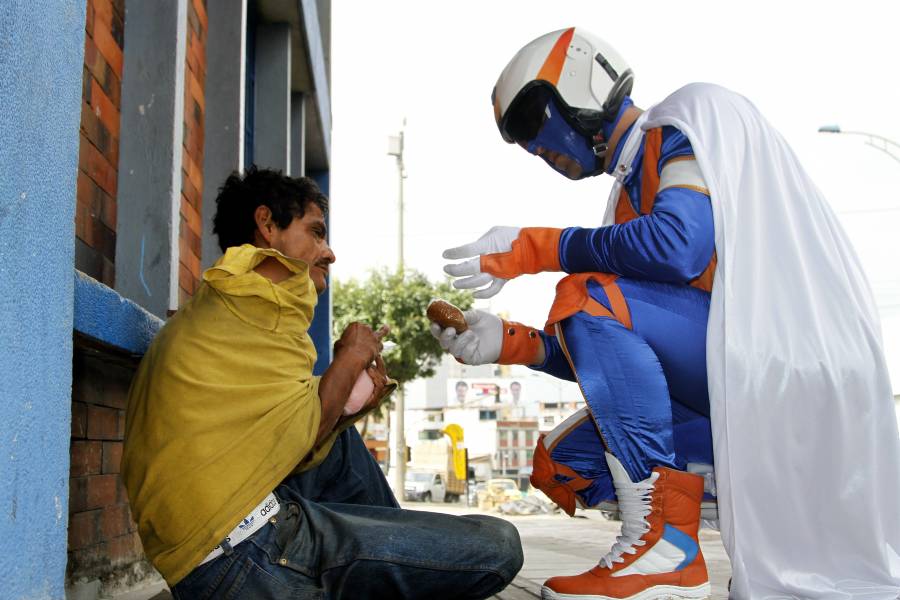 LatinaLista — One corner of the world has a new superhero and he’s battling one of the most dangerous villains of our time — hunger!

Three days a week in the city of Bucamaranga, Colombia, a masked, cape-wearing Good Samaritan cruises the streets on his trusty moped in search of the homeless to save them from the hunger pangs too many of them try to ignore.

He’s dubbed Superpan and this new hero has captured the attention and appreciation of most everyone in Bucamaranga, though one local newspaper reports that occasionally SuperPan is the target of unflattering name-calling.

Pledging that his service is not part of any publicity campaign or has political overtones, Superpan appears to be just an ordinary private citizen wanting to help the unfortunate.

Toting a box filled with bread on the back of his “Ves-pan” (he rides a Vespa moped), this anonymous do-gooder flies — actually, he walks really fast so that his cape flies behind him — to the rescue with bread in hand, along with words of encouragement assuring people to keep the faith that things will get better.

And how can things not improve, for just a few hours, with a hero like Superpan!

(Editor’s Note: The following video is in Spanish)

Colombia, homeless, hunger, superhero
Previous Post Report: Latino Students in California Are the Most Segregated in Nation
Next PostVideo: Changing our mind(set) on fulfilling our full potential

Report: Latino Students in California Are the Most Segregated in Nation
Comment
Video: Changing our mind(set) on fulfilling our full potential