Filled with tension mixed with many different emotions, Puerto Rican voters were subjected to slow results and a very close race that became clear early on that it was going to be a historic night. I’m not talking about the tight race between Obama and Romney but a political race with a bigger impact for Puerto Rico. 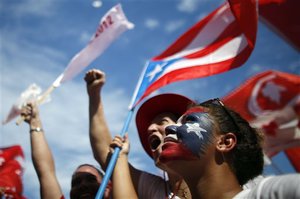 First, an explanation of Puerto Rican politics. Puerto Rico has always had three main parties and all of them are related to the status of the island.

There is the New Progressive Party (PNP) that believes in statehood; the Popular Democratic Party (PPD) that was the one responsible for the current commonwealth status and defends the relationship with the United States; and the Independent Party (PIP) that wants to make Puerto Rico a Republic.

For the first time, three new parties were also created for a total of six — all fighting for power.

In 2008, Luis Fortuño and his party, the PNP, won the executive and legislative branches. However, Governor Luis Fortuño lost popularity over the last four years because of a series of events that included: firing 30,000 public service workers; imposing a fee on the University of Puerto Rico that caused almost a three-month protest that included orders from the government to use force against students, which made the ACLU file a report attacking the use of force on the island creating federal attention; a significant rise in crime in which 2011 was declared the most violent year with 1,135 deaths; a 400 percent rise in electric rates and other things that royally pissed off the people.

Even though he had lost popularity among the people, Fortuño’s race for re-election was still tight. Why? It could have been the vote over the island’s status.

Having the referendum on the same day as the general elections had voters vote for two ballots on the same day. One ballot asked if Puerto Ricans where happy with the current status, the answers were “yes” or “no.”

Then on the same ballot voters had to also choose one of three options: to become independent, to have a relationship with the United States that gave more sovereign powers to the island, or statehood — a request to become the 51st state of the United States.

People and the media attributed the tight race to the governor’s party having a lot more money for ads that ranged from propaganda for the party’s accomplishments to attack ads insinuating the candidate of the PPD party, its major opponent, Alejandro García Padilla, wasn’t prepared to lead.

The creation and campaigning of the three new parties added an additional interest and curiosity from voters, with these parties primarily attracting the youth and people who had grown tired of the two main parties trading power.

Yet, at the end of the day, the race remained between the two main contenders, the PPD and the PNP, with the other parties getting less than 3 percent of the votes.

The competition between the two main parties was fierce.

In the last months before the election, PNP media attacks on the PPD increased and the PPD made sure people remembered what happened in the last four years.

Alejandro García Padilla announced he was ready to work for the country instead of working only for his party. His words resonated with people who have grown tired of the island’s politicians.

Yet, with all the excitement over the change in political leadership on the island it’s the results over the nation’s status that serves as a reminder that change is hard.

For the first time, the island’s commonwealth status “lost” with the “No” response leading with 53% — statehood won with 66% of the vote.

People are already fighting the results.

Fortuño’s party is saying the statehood option victory means they won, even when they lost races at the national level. Many fear that Alejandro García Padilla won’t do anything with the results. So far, the PPD has not touched the status issue.

Things could get really interesting though because the Resident Commissioner, Puerto Rico’s member of the House of Representatives in Washington D.C., who has voice without voting power, is from Fortuño’s PNP and many are sure that he will be the one fighting for the change in status no matter what the new governor says.

Then there are some who are arguing that the process itself shows that we are a colony because, in the end, the Congress of the United States has the last word.

The overall ignorance about the history of Puerto Rico allowed for the public to be mislead about what life would be like on the island under each status option.

If there is a silver lining to the debate, it’s the fact that the resulting political discussion is an educational process, much needed for all who don’t know how Puerto Rico arrived at this crossroads in our history. The greatest beneficiary of this discussion is young people, the target group of all the political parties.

In the end, it’s clear people feel happy with the decision regardless of the journey that brought us to this moment.

Personally, I believe this brings Puerto Rico to the brink of two complete opposite outcomes, either we are closer than ever to statehood or the United States, once and for all, rejects statehood for the island — whichever way would lead to a new path for conducting politics in Puerto Rico that would stop dividing the island on the larger issue, as it has done for so long.

Ada M. Alvarez Conde, based in San Juan, Puerto Rico, is a journalist, professor and PhD candidate in history of Puerto Rico and the Caribbean.