Latina Lista: News from the Latinx perspective > Columns & Features > Global Views > Those darn smart Peruvian engineers have thought up yet another (healthy) use for the ubiquitous billboard 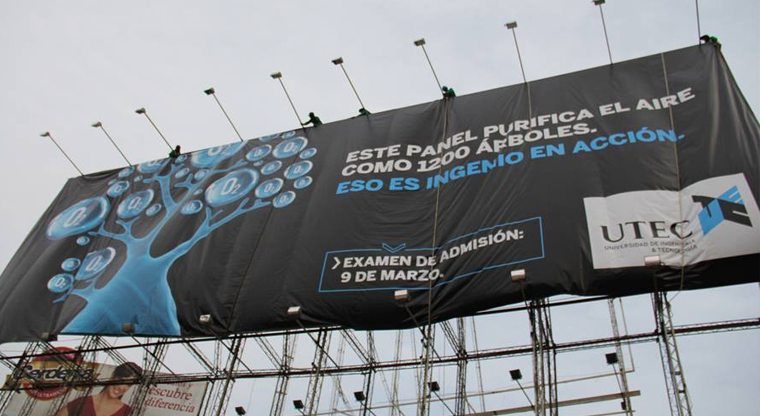 LatinaLista — For the last several years, meteorologists and the medical community in Peru have been ringing the alarm over the country’s worsening air pollution.

It’s a problem that while it signals that Peru is becoming more of an industrialized nation, it’s also a sign that worst medical outcomes are on the horizon for Peruvians. Probably no city in Peru is choking itself to prosperity more so than Lima.

Non-stop construction and a growing population preferring their own cars to mass transit are putting a strain on the lungs and overall health of Limeños.

So, when there was news that the University of Engineering and Technology (UTEC) was building a new campus in Lima, locals didn’t think twice about yet another construction site spewing dust and chemical particles in the air for everyone to breathe. After all, a new university campus means progress.

But UTEC isn’t just any other university. In the past, the engineering faculty and students have proven to be 21st Century engineers with their innovative use of technology and construction that actually benefits local communities.

This time, the university decided to do something for themselves, as well as, the local neighborhood. In the middle of the construction zone on their campus, UTEC engineers, together with agency FCB Mayo, erected what is the equivalent of a 1200-tree forest in the form of a billboard — with a very special message.

Though most billboards are not welcome byproducts of industrialized progress, more of these kinds of billboards would be a welcome sight in areas where people and progress live side-by-side.

Underground comedy on the border has its own jalapeño flavor
Comment
GiveForward Campaign: 7-month old Venezuelan baby in need of a heart transplant