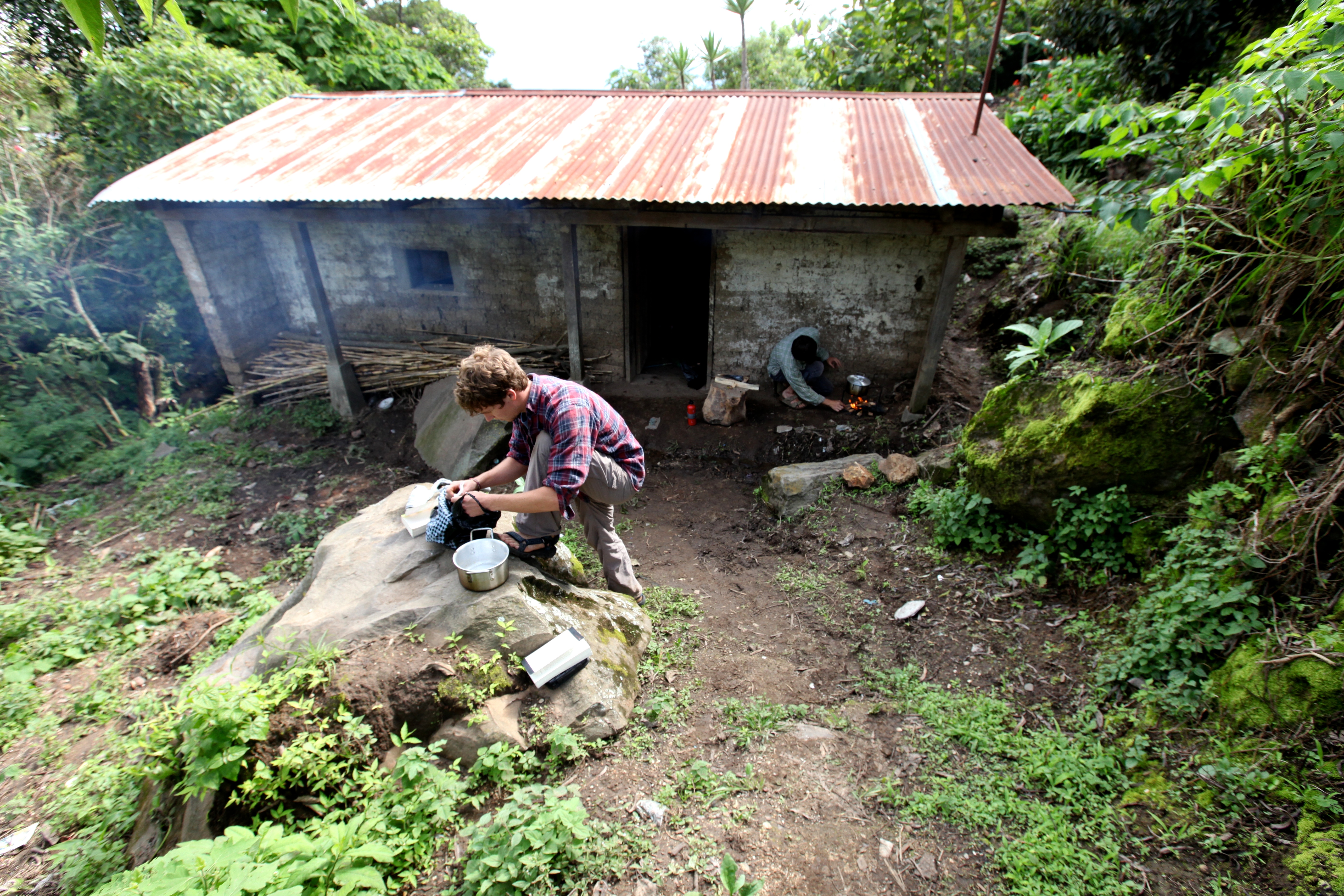 Guatemala City – Economics students are no strangers to numbers. Chris Temple and Zack Ingrasci were familiar with the overwhelming statistic that 1.1 billion people live on a dollar day, but they still couldn’t understand it.

“Coming from Connecticut and Seattle we just couldn’t comprehend how someone could manage such a small amount of money for all their costs,” said Temple. “We wanted to get a first-hand understanding and share it with our friends – we couldn’t be the only people struggling to connect to these issues.”

So, in the summer of 2010, Temple, Ingrasci and their filmmaker friends, Sean Leonard and Ryan Christoffersen, left the comfort of their middle class homes in the United States, and rented an abandoned storage shed in Peña Blanca, an impoverished Mayan community in Solola, Western Guatemala.

They lived on $1 a day for two months, battling parasites, fleas, financial stress, fainting spells and a never before experienced hunger along the way.

“We knew that we could never fully replicate poverty, but we did want to simulate a few key aspects in an academic way,” said Ingrasci. “We made our income unpredictable and tried to start our own business.”

To imitate the unstable income that their neighbours faced as casual labourers, they distributed their joint budget of $224 into 56 daily incomes of between zero and nine and placed each of the numbers into a hat. Each day they drew a number at random, which would give them their daily budget. Some days they got lucky, pulling out an eight or a nine, and some days they had to go without.

After mastering the essentials, such as levelling the dirt floor they were to sleep on, finding a water source and making a fire, they learned how to barter in the local market and buy ingredients that would make their limited diet of beans, rice and tortillas go further.

Alongside the economic challenge of trying to survive on $1 a day, the four university students also wanted to gain an insight into how microfinance, giving small loans with mandatory savings to poor people, is helping to reduce poverty and spur entrepreneurship in rural areas.

They took out their own $125 microloan to start a small business growing radishes, and conducted a series of financially themed interviews with their neighbours.

“In these interviews we saw the disparity between our lives and theirs. There’s no way we could replicate living at this level of poverty [our] entire lives,” said Temple.

Keen to share their experience with friends and family back home, the team started editing short video blogs on the dirt floor of their hut and uploading them to YouTube – their first video made it onto the site’s front page and received 400,000 hits on its first day.

After weeks of sleeping on a dirt floor, drinking dirty water and eating an inadequate diet, the four students started to see changes in their bodies:

“It was the first time in my life I’d ever been hungry, and it’s not just about having hunger pains: it’s about how it affects your entire mentality. You feel your body deteriorating and your mind working slower. Our nails changed colour and we worried there were going to be long-term health effects,” said Ingrasci.

Three weeks into the experiment, Temple contracted Giardia, an intestinal parasite, which gave the team an unforeseen insight into trying to cover unexpected medical bills on an already strained budget.

“When Chris got sick our simulation failed because we couldn’t cover the cost of medicine. It was $25 and we tried to save up for 10 days but it was impossible. $25 when you are spending money on firewood, food and paying back loans – it was impossible.”

Temple resorted to emergency medicine they had brought from home, knowing that his neighbours did not have that luxury.

When they returned to the U.S. two months later, and each of them 20lbs lighter, both Ingrasci and Temple felt optimistic about the potential their generation has to end extreme poverty. Their insight into how microfinance is having an effect on people living on the poverty line and empowering them to start their own businesses showed them there is hope.

With over 300 hours of footage from their time in Peña Blanca, they decided to make a documentary and use their experience as a way to connect with other students and increase awareness of the financial reality of the poor.

“We felt like a lot of [poverty] films and documentaries are about making you feel bad about the situation and guilting you into making a difference. What we wanted to do was inspire people to make a difference and hopefully empower them to feel like they can create change in the world,” said Ingrasci.

Shortly after returning from their trip, Ingrasci and Temple were invited to give a TED talk in Buenos Aires. Earlier this year, Living on One, which has been endorsed by Nobel Laureate Muhammad Yunus, was awarded Best Documentary at the Sonoma International Film Festival.

Below is the first video the four college students uploaded on YouTube and which explains their project.

Border counties dominate '30 Worst' lists for health coverage
1 Comment
Artist to unveil mural depicting role of racism in US history, up to the death of Trayvon Martin