GUATEMALA — When you open a newspaper in Guatemala you are invariably greeted by a series of numbers:

The answers are typically: high and zero.

During the past decade, the number of females appearing in these articles has been rapidly increasing. So much so that the recently elected President, right-wing retired general Otto Pérez Molina, has announced the creation of a new task force to combat the country’s high femicide rate. 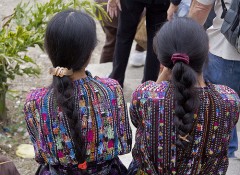 This new unit, which will be led by former Prosecutor Mirna Carrera and will focus on intelligence and investigative efforts, aims to reduce the number of female deaths by 25 percent this year; but it won’t be an easy battle.

Human rights groups say Guatemala is currently witnessing epidemic levels of violence against women. Raped, murdered and mutilated, their bodies are dumped in rubbish bags and abandoned in public places. Since the year 2000, over 5,000 women and young girls have been murdered throughout the Central American nation.

“Femicide is being addressed as a matter of state policy, and a message is being sent out to aggressors that their actions will not be tolerated and that they will be punished,” says Mayra Sandoval, a representative of the non-governmental Observatory against Femicide.

Despite the courts passing a law three years ago to formally recognize femicide as a crime that comprises both physical and psychological elements of abuse to women, it has done little to reduce impunity rates.

According to Amnesty International, Guatemalan women experience one of the highest levels of violence in the world; and while death rates continue to rise, convictions do not.

Only about two percent of femicide cases ever reach sentencing, so the government’s new task force has a lot of work to do. Even Guatemala’s top law enforcer, attorney general Claudia Paz, admits most crimes against women go unpunished:

“The justice system hasn’t given violence cases the importance they deserve. And with violence against women, the problem is even worse,” says Paz.

Femicide, defined as “the killing of females by males because they are female”, has long been a problem across Latin America and over time the media has grown numb to the violence.

Often women from indigenous communities are targeted for rape and other forms of sexual violence, torture and killings specifically because of their indigenous identity. In the past, little has been done to counter it: attacks were rarely investigated and seldom brought to trial.

Last year, international human rights groups joined together to urge Guatemala’s authorities to take action against the high number of women being murdered across the country and ensure perpetrators were brought to justice. Then, last month, two Nobel Peace Prize winners, Rigoberta Menchu and Jody Williams, came to Guatemala with the same objective.

Finally the government is listening.

But while human rights groups and Nobel Laureates can campaign for adequate policies, it is up to the new “task force to combat femicide” to implement effective programes and preventive efforts that will tackle the core of the problem – pervasive poverty and legal exclusion.