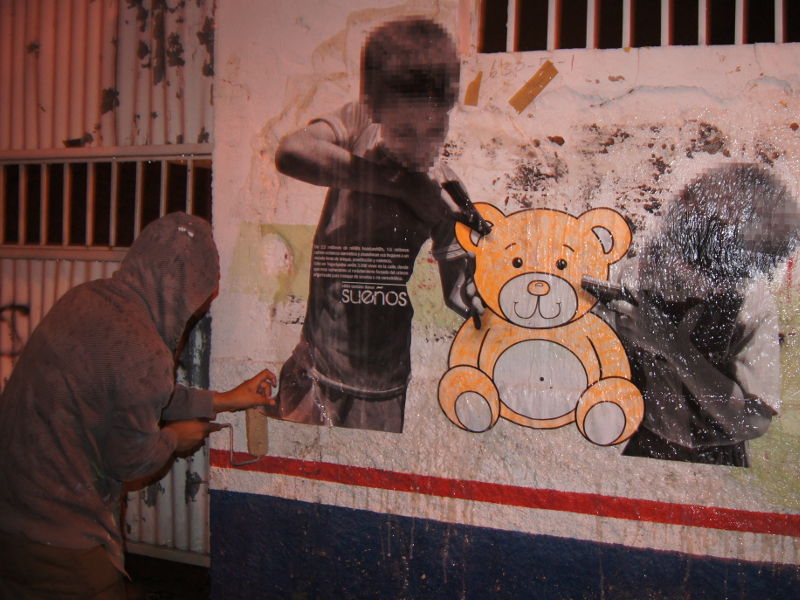 TEGUCIGALPA, Honduras – Art is their weapon and the walls of Tegucigalpa are their canvas in the fight against violence.

In one of the most violent cities in the world – with 1,035 murders in 2012 – an increasing number of street artists are expressing their indignation and trying to raise public awareness.

Since their art isn’t universally supported, they work in anonymity and hide their identities for security reasons.

“Some people tried to kill me while I was putting up my work,” said the artist known as Maeztro Urbano, a 28-year-old who graduated in 2005 from Honduras’ National School of Fine Arts (ENBA). “I’ve been shot at from moving cars, but they usually let me do my work.”

With Urban Violence, he drew so much attention that he appeared in the Nat Geo Adventure TV program “Don’t Tell My Mother.” For this project, he used masterpieces such as the Mona Lisa by Leonardo Da Vinci, The Son of Man by René Magritte and American Gothic by Grant Wood.

The works were printed in black and white and modified in such a way that the primary object in the piece – and the only thing printed in color – was a gun.

“I chose these because their beauty can be transgressed with a gun and that represents our country,” he said. “It’s a beautiful place, but it stands out on the global stage only because of the violence.”

This artistic expression is carried out to raise public awareness, while demonstrating the deep need for expression given the tenuous control over the violence, said historian Édgar Soriano Ortiz from Universidad Nacional Autónoma de Honduras.

“The violence is a structural problem that must be dealt with from different angles,” he added. “Art can play a very important role, alongside comprehensive and democratizing policies.”

Another young artist trying to raise awareness is 27-year-old Cariqui, whose artistic name derives from the Spanish word for “caricature.”

Cariqui said he was drawn to street art because of the freedom offered by a can of spray paint that he cannot find with a brush. For him, making street art isn’t about getting famous.

“I do it as a contribution to society,” he added. “I try to make shocking images that are part of our daily reality to raise social and political awareness.”

One of his works, Teoría del Terror (Theory of Terror), represents the way in which the bodies of murder victims appear in the major cities of Honduras.

“I painted a bouquet of flowers in the form of an encostalado [the term used for the victims of organized crime in Honduras], who appear wrapped in sheets and are used as weapons to spread fear among people,” he said. “Flowers are a universal language to convey feelings. In this case, they’re showing the dangerous situation we’re experiencing.”

These artists are hoping for the same reaction to their works: a movement from criticism to action.

“We all have something to contribute,” said Maeztro Urbano, who grew up in poverty in the surroundings of the Álvarez market, located less than a mile from the capital’s historic center. “We can’t keep waiting for someone else to solve our problems or keep shielding ourselves with excuses such as poverty.”

It was in the Álvarez market where he forged his dreams of being an artist. His experience is reflected in “Ell@s también tienen sueños” (They Also Have Dreams), a project highlighting the importance of providing opportunities, regardless of the situation or a person’s disabilities.

“Difficulties allow people to grow and achieve great things for their country and for themselves,” he said. “At the same time, some people with real abilities have never gotten the chance to do something.”

To give the children of Honduras that opportunity, Maeztro Urbano organizes artistic workshops, where participants paint murals on abandoned buildings.

In 2014, he will produce a new series of murals titled Día a Día (Day by Day) in which he will represent workers and ordinary citizens who are fighting the violence in seven cities in Honduras – La Ceiba, San Pedro Sula, El Progreso, Gracias, Comayagua, Choluteca and Tegucigalpa.

“Every day, we take a stand against crime – not through violence, but through our work,” Maeztro Urbano said. “The tools of our work allow us to take a stand in life.”