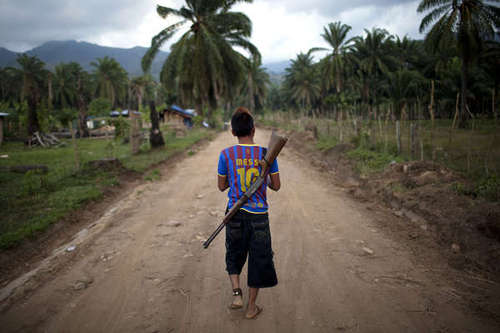 A criminal group in Honduras is using songs about drug trafficking to glamorize criminal life for child recruits who they then train in the use of high-powered firearms, in another example of organized crime’s use of children as an expendable and low-risk source of labor.

A 12-year-old boy appears in one scene, skillfully firing a .12 gauge semi-automatic shotgun. In one of the videos, members of the group are seen dancing to the tune of “narcocorridos” — ballads that glamorize drug trafficking — with their weapons in hand.

According to police, the group operates in various municipalities in the Comayagua province, engaging in kidnapping, murder and theft. Sabillon said that one minor in the group played a significant role in a recent attack against police, in which five agents were injured.

The use of minors, said Sabillon, offers groups such as Los Espinoza “an opportunity to act with impunity,” reported La Tribuna.

The recruitment of children is a tactic that has been employed by criminal groups throughout the region. Children are a low-cost investment for these groups, and are highly expendable. The legal status of underage youth also makes them difficult to arrest or prosecute and they are less likely to be suspected of committing a crime in the first place. They also make for unreliable witnesses if called upon to testify.

Children are easily seduced by the glamorization of criminal life. Young boys, particularly, often filled with a sense of invulnerability, are easily tempted with the idea of brandishing a weapon and wearing a uniform.

This may help explain the use of “narcocorridos” in the training of youth by Los Espinoza in Honduras. This music, which romanticizes the violence surrounding the drug trade, is particularly famous in Mexico, where a strong culture around drug trafficking has taken root. While less heard of in Honduras, narcocorridos apparently enjoy some popularity in the western part of the country.

This article first appeared on the site InSight Crime.

cartels, children, firearms, Honduras
Previous Post Children of Deported Undocumented May End Up In Foster Care
Next PostGuest Voz: Latino & African American students more isolated in schools today than in the past

Children of Deported Undocumented May End Up In Foster Care
Comment
Guest Voz: Latino & African American students more isolated in schools today than in the past