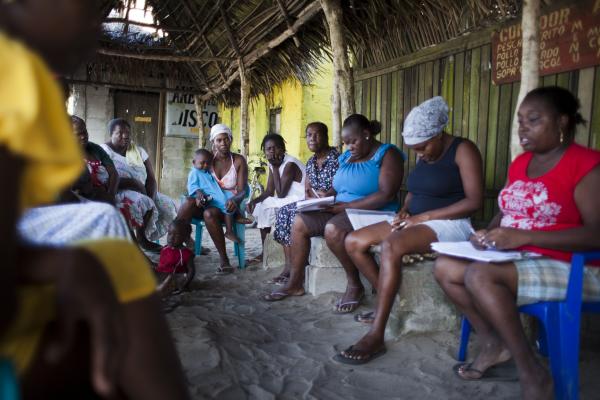 When there is a health emergency like the occasional cholera or dengue epidemics in Honduras, non-profit organizations, and the Honduran government try to reach the local people through innovative programs.

When the health emergency affects a large area, like the 54 Garifuna communities in 5 Departments on the North Coast of Honduras, in addition to local interventions, the government and non-profits turn to the use of the media like radio programs and movies to get out the word about how to prevent the illness, and how to know when to seek treatment.

The topic of using the media to get out health messages will be a topic at the Western Conference about Global Health to be held in Seattle in April 2014, and some Garifunas hope to talk about their experiences with the use of the media in combating HIV/AIDS, which has included innovative talks with handouts and props, student written plays, radio-novelas, and the new Garifuna movie “Garifuna in Peril”, produced in Los Angeles and in Honduras.

Some ethnic groups in Honduras and in Guatemala are bilingual-Spanish-indigenous languages, including the Garifunas, and so on top of the general problem of how to get the word out, it is necessary to consider how do you discuss these things in indigenous or other minority languages, and also the beliefs of the different ethnic groups on how disease is spread or prevented or identified or treated.

Because of the magnitude of the problem, and extensive territory involved, and the delicateness of the topics, international funders were willing to help ethnic groups get involved to try to shape a message that was culturally appropriate, in the native language, and would reach the young people that were most at risk.

Because the Garifunas have the highest rate of HIV infection in Central America, partly related to many Garifunas going back and forth between Honduras, all the ports in the world where Afro-Honduran sailors go, and the movement to and from New York City, where an estimated 100,000 Garifunas live, as well as internal factors related to the culture, the Garifunas have over the years been very active in trying to use media in different formats to try to combat the high number of Garifuna young people dying of AIDS.

One technique that was used to get the message out, were talks that tried to answer people’s questions and doubts.

For example, it is all well and good to say to a woman, you should have your man use a condom to prevent AIDS, but what happens if neither the woman or her partner knows how to use a condom? How do you, as an older married woman, bring up this topic with your partner?

If you speak Garifuna at home, what are the words in Garifuna for AIDS, for condoms, etc.? What do you do if he answers back with some excuse, like condoms are too small and won’t fit and won’t work?

One practical technique used in Trujillo during these talks with adult women was to take out plantains and condoms and practice. The largest plantain is called a “platano macho”, (a large male plantain, based on the similarity of plantains to certain parts of the male anatomy.)

The women were willing to admit, that if the condon could fit on a platano macho, it would probably be big enough for use by their husbands. First they watched how the package was opened, and applied to the plantain, and then they themselves tried putting it on and taking it off. This reduces a lot of fear and misgiving at the moment, if someone, either the man or the woman, actually knows what to do.

The women were also given instruction sheets in Garifuna, but these sheets which were developed with the help of Garifunas, tried to help put the woman and the man at ease, give them suggestions on what to say and how to approach the problem. These sheets were read out loud, as not all older Garifuna are literate in any language.

When Garifuna nurses of other health professionals give talks in high schools, they are not usually so hands-on, and probably cannot be. The Catholic Church in Trujillo, like elsewhere in the world, has not been supportive of teaching people to use condoms.

When Nancie Gonzales did her field work among the Garifunas, there were an average of 2 Garifuna marriages a year in the Catholic Church in Trujillo, out of about 5,000 Garifunas. In the 17 years I have lived in Trujillo, among my Garifuna friends and acquaintances, there have only been three weddings total, and one of them was because the father was Mormon, and another was to qualify for an immigration visa as spouse.

The other was of a man over 70 years old who decided that now he could say he would be faithful to his wife until death do them part.

Some Honduran Garifuna musicians have also written songs about the problem. For example, the closing number of the National Garifuna Folkloric Ballet, a Honduran government sponsored dance group, the last number was a song in Garifuna about ” How are you going to be a mother, when you yourself are still a little girl?” and then the last line was translated into Spanish for those who did not speak Garifuna.

Another technique that was used were plays often written in Garifuna, even though over 80% of the young people in Trujillo do not speak Garifuna. I know theater groups were formed in Trujillo and in Santa Fe, and I think in other towns like Limon. The young people wrote their own plays, what did they want to tell each other about how do you get HIV, how do you prevent it, how sad you will feel if your friends have HIV and die of AIDS.

The groups performed in their own towns, such as in the Community Center in Barrio Cristales, Trujillo, and sometimes theater festivals were held in combination with big Garifuna events like 12 April, Garifuna Day. The year the theater festival was held in Trujillo, people were in the streets until at least 1 am watching the plays.

A professionally written play about HIV/AIDS issues was written with Honduras’s most famous playwright Rafael de Murillo Selva. He worked together with Miskito and Garifuna high school students studying in the capital city to write a play which incorporated Miskito and Garifuna languages, and their beliefs about what causes AIDS, as well as information on how to prevent it.

According to Honduran anthropologist Geraldina Tercero, he used as a basis for the work also her study on HIV among the Garifunas. For example in Spanish, the Garifunas will say the coconut trees of the North Coast have died of AIDS, because just like AIDS, the trees get sick and die and there is no cure.

In Garifuna, it is the opposite, that AIDS is euphemistically called “coconut disease”, because like the coconuts, Garifunas with AIDS die and there is no cure.

At least two “radio novelas” (radio dramas) were done on the social issues in the Garifuna communities, including specifically HIV infection and AIDS. A popular radio novela was “Los Ancestros no Mueren” (The Ancestors don’t Die). These radio novelas were played two or three times a day on radio stations all over the North Coast.

The Garifunas themselves helped to write them, and were the actors or voices in them. These radio novelas were bilingual Spanish-Garifuna.

In the time period when the radio novelas were playing on the air, local Garifunas in each community, often young people, including young women and gay men, were leading discussion groups about the issues raised in the radio-novelas. These radio-novelas seemed to have been popular — I often heard them on in restaurants, people wore the T-shirts they gave out about the radio-novelas, people talked about the show in the streets, etc.

The Trujillo Garifuna gay man whose voice was heard in Garifuna in the telenovela was very motivated by the experience. He went on to take a leadership course in Human rights for young Afro-Descent leaders sponsored by ODECO, and now works in a Comunidad de Cristales and Rio Negro projects with children who were left orphaned by AIDS. ODECO and the Comunidad are both Garifuna non-profit organizations.

When Ali Allie and Ruben Reyes were discussing doing a movie in Garifuna, they decided to ask the Garifuna community what were some of the topics they would like to see in the movie. They said language loss, land loss, Garifuna health practices, and the problem of HIV/AIDS in the Garifuna community.

These themes are in fact all covered in the Garifuna in Peril movie.

In dealing with the AIDS epidemic, parents need to be able to talk to their children about their behavior in a way that shows respect, and concern but not make the child be rebellious and go out and do exactly what the parents do not want them to do.

Also Garifuna girls, often at a fairly young age, need to be able to talk to the Garifuna boys about HIV.

At the end, the boyfriend gets an HIV test, and tells the girl, “I know you cannot play with life.” It is a way of modeling positive behavior, and is a tender love story. Any Garifuna or other African American girl could look at that love story, and say, “Yeah, I would like my relationship to be like that.”

Wendy Griffin has been researching and writing about Honduras and its Indians and its 4 Afro-Honduran groups since 1987. The co-author of 6 published books, she splits her time between the US and Honduras volunteering with Garifunas and Honduran Indian projects.