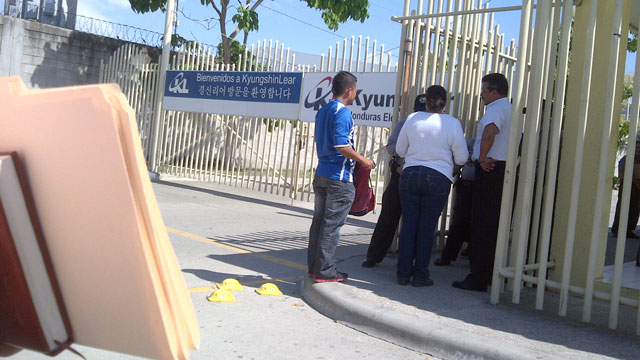 A Korean-owned factory in Honduras is being investigated for allegedly violating labor rights after former employees complained they had to wear diapers to work because they were not given sufficient bathroom breaks.

Kyungshin-Lear Electrical Distribution Systems, which supplies auto parts that are exported to the United States, could now face sanctions under the Central American Free Trade Agreement (CAFTA-DR) as a result of its alleged unwillingness to comply with fundamental workers’ rights.

“The company has never forced us to use Pampers. What it has done is restrict us from going to the bathroom,” said Maria Consuelo Aguiriano, a former employee of Kyungshin-Lear in San Pedro Sula, northern Honduras. “We only have permission to go to the bathroom twice a day during our shift – twice a day in nine hours. That forces us, especially women at certain times of the month, to use [diapers]. To keep yourself clean during your whole shift, it’s necessary to use them.”

According to a report by the Institute for Global Labor and Human Rights (GLHR), a U.S.-based human rights organization, temperatures inside the factory regularly exceed 95 degrees Fahrenheit. However, due to limited toilet breaks, employees refrain from drinking water.

Barbara Briggs is the assistant director of GLHR and helped compile the report, which states that Kyungshin-Lear exports its auto parts to Montgomery, Alabama and West Point, Georgia. She says that the factory’s workers live in abject poverty.

“These workers – working long, high stress, grueling shifts for a huge, well-known company, exporting car parts to Hyundai and Kia car factories in the U.S. – are not earning enough to live decently. When we were in Honduras, we visited some of the workers in their homes and several of them were as miserable as any home we had seen in Bangladesh, patched together from scrap wood, cardboard and bits of corrugated metal, with dirt floors and leaky roofs, latrines and no access to safe potable water. It was really shocking.”

During the past year, inspectors from the Honduran Ministry of Labor have attempted to visit the maquila five times, but were refused entrance on each occasion. Last month, when local media reported that Kyungshin-Lear “forced” its employees to wear diapers, the Honduran Minister of Labor, Jorge Bogran, traveled to the factory to investigate.

The Ministry later released a statement denying that management enforced the practice, but said inspectors would be carrying out further investigations into possible labor violations at the Korean-owned factory.

In September 2011, with support from union representatives of the General Confederation of Workers (CGT), a group of Kyungshin-Lear workers attempted to establish a union. However, management ignored their efforts and blocked the necessary administrative steps so that the union could not be officially formed.

“The underlying problem is that the company doesn’t want to recognize the union that has been legally constituted,” said Jose Luis Baquedano, the general secretary of the Confederation of Honduran Workers (CUTH). “They have fired four complete executive committees. For us as a trade union movement, there is a violation of human rights and labor rights because it violates national legislation and OIT [International Organization of workers] agreements.”

Aguiriano worked at the factory for almost seven years before she was fired in January 2012 for trying to start the union. She says that in the past couple of years, 130 workers have been fired or forced to resign for expressing similar interests.

“They don’t want to recognize el sindicato by law because they don’t want to value our rights. When I worked there, I felt completely exploited. They violated all of our rights: from not allowing us to use the bathroom, to not giving us permission to go to the doctors, to not having medicine at the factory, holidays, low pay. There is so much violation of rights inside the company,” said Aguiriano.

A spokesperson for Lear Corporation in the U.S said the company had conducted its own investigation. “Lear Corporation takes any allegation of inappropriate and illegal practices very seriously. We believe employees must be treated with dignity and respect and are entitled to safe and appropriate work environments.”

Kyungshin-Lear has been operating in Honduras for the past ten years and employs over 3,000 people. Workers say the conditions inside the factory are “exploitative”, but they stay because there are few other jobs in San Pedro Sula. Official statistics state that unemployment in Honduras rests at 6.8 per cent.

Although Bogran has met with the factory’s directors on several occasions since the allegations broke, due to weak law enforcement in Honduras, many global trade unions believe Kyungshin-Lear will only improve its working conditions if the U.S. Department of Labor intervenes and enforces the labor rights of the CAFTA agreement.