In Absence of Formal System, Thousands Earn a Living Recycling Trash in Argentina

Thousands of people in Buenos Aires work independently or with the government to collect and resell recyclable materials in the absence of an institutionalized recycling system. The business offers a chance to make a living to people who lost their jobs in the economic crisis or come from families traditionally excluded from formal employment. 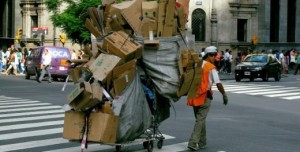 BUENOS AIRES, ARGENTINA – It’s a hot morning in Buenos Aires, Argentina’s capital. A man in his 50s walks between giant bags of trash in a large storehouse. Sunlight filters through the windows overhead.

As he walks, the man greets his co-workers with a raise of his hand as he passes by. They glance at him in acknowledgement while continuing to feed plastic and cardboard into machines that compress them.

The man, Alberto Santiago, and his 12 colleagues work for Cooperativa 30 de Noviembre, an organization of workers that process and sell discarded plastic and cardboard. They are known as urban recyclers or urban recuperators.

The cooperative operates in a humble neighborhood of Buenos Aires called Villa Soldati. Trucks arrive here full of plastic and cardboard discarded by hospitals, hotels and businesses, as part of an arangement with the city government. The cooperative flattens and separates the materials, then loads them into other trucks to sell to large industries that then recycle them.

Santiago doesn’t talk much, but when he does, he speaks with a smile. His robust back disappears down a corridor in the storehouse lined with bags of garbage. To the right is cardboard, and to the left is plastic.

At the end of the corridor is a kitchen. Without saying much more, Santiago prepares some maté, an infusion of yerba leaves and hot water commonly drunk in Argentina. It’s the ritual that he needs to little by little begin to tell his story.

Santiago says that he didn’t always work with trash. Like many of his co-workers, he ended up in the business after the country’s 2001 economic crisis.

Santiago worked as an electrician in a factory for more than 25 years, from when he was 19 until he was 45. He lived in Campana, a city located 90 minutes from the capital.

But when the economic crisis hit, the factory downsized its staff and paid severances to its oldest employees in order to cut costs. Santiago was among those laid off.

“With the crisis, the money ran out for me quickly,” he says, “and at my age, it was difficult to find another job. Sometimes, I used to go to the capital with a bicycle, and I’d bring home some things that I found in the street. That’s how I decided. And one day, I went out with the bicycle exclusively to see what I’d find to be able to sell and to earn money.”

He began to go out every day, searching especially for white paper, which he’d sell on the weekends. With this money, he bought a cart and little by little found his new job: as a “cartonero,” or a person who collects cardboard.

He soon realized that in order to make enough money to support his family – eight children, a wife, an ex-wife and eight grandchildren – he’d have to stay in the city from Monday to Friday. This gave him more time to gather anything he could sell.

He sold cardboard, plastic, paper and newspapers to intermediaries, people who in turn sold them to large recycling companies. Anything else that seemed useful, like washing machines or beds, he sold to people who needed them.

But he didn’t have anywhere in the city to stay. So he started living in the streets.

“I slept in a train station,” he says. “There, I made a precarious house with plastic and cardboard. I stayed there all week. On the weekends, I sold what I gathered and returned home in order to see my family.”

Buenos Aires lacks an institutionalized recycling system, so cooperatives and individual citizens work independently or with the government to collect, process and resell recyclable materials. Some cartoneros, as they are called, say they take up this work because they have been excluded from the formal employment sector, either by the country’s 2001 economic crisis or from birth.

More than 8,700 people worked in the trash recycling sector in Buenos Aires as of 2005, according to a report by the International Organization for Migration and UNICEF.

Yanina Noel Barrionuevo, who works for the city’s Ministry of Environment and Public Space, says that residents discard their unseparated trash outside their homes, and the government sends trucks to collect it at night.

With the absence of an institutionalized recycling system, cartoneros and cooperatives drive the reycling process independently or with the government.

Pulling carts by foot or horse, the cartoneros scour the streets before the trucks come through and take recyclable materials from citizens’ trash, Barrionuevo says. Later, they bring these items to various sites in order to separate them.

The growth of this trash recycling business following the 2001 economic crisis required regulation by the city government. It passed a law in 2002 to establish a register of urban recyclers and cooperatives, according to the Dirección General de Información y Archivo Legislativo.

Barrionuevo says this system emerged to add order to the cartonero system and avoid complaints from neighbors about trash strewn on the sidewalk after cartoneros passed through.

Of the cartoneros in the city, 2,100 have registered with the government as urban recuperators, according to the website of the city government. It divides the city into zones and assigns about 20 cartoneros to each one. They cover a radius of more than 1,500 blocks three times a week, collecting more than 5,000 tons of recyclable waste per month.

The urban recuperators receive uniforms from the government as well as a subsidy of 1,200 pesos ($250) per month. They are also free to resell the recyclable material that they collect.

In return, Barrionuevo says that the government requires the urban recuperators to carry out their work in an orderly fashion. After they tear open the bags of trash to search for recyclable goods, they must leave their blocks clean.

“With this system, the complaints of the residents lowered,” she says.

But many other cartoneros work independently, without any support from the government, Barrionuevo says.

This is the case of Carlos Gómez, a thin man with leathery skin and muscular arms. He leaves his home in Pompeya, an area that borders the city’s suburbs, every day with his handcart, only resting on days that it rains.

Gómez says that he has carved out his own collection zone. No one assigned it to him, but he considers it his own, and other cartoneros respect it.

“Before, I covered a commercial area, but there was a lot of competition,” he says. “It came to blows in that area. I left there. Now, I am happier.”

He also likes the independence of being his own boss.

“I manage my schedule,” he says.

Gómez says that he earns between 500 pesos ($100) and 700 pesos ($150) during the weekends, when he sells what he’s collected throughout the week. This covers his household expenses.

In another trash circuit, the government arranges for trucks to collect recyclable waste from hospitals, factories and certain other businesses and bring them to various cooperatives registered with the government.

More than 40 cooperatives are registered with the government to handle this circuit, Barrionuevo says. Santiago’s cooperative, Cooperativa 30 de Noviembre, is one of them, and Barrionuevo is its supervisor.

Like Gómez, Santiago began selling cardboard independently in the streets. But today, he is an urban recycler in a registered cooperative.

Santiago says that the cooperatives earn money by selling the materials after they process them. The businesses that buy them do the actual recycling, and later these materials return to the commercial market. The cooperative divides the profits from these sales among its members, usually 20 pesos ($4) each an hour.

Regardless of whether these recyclers work in cooperatives, with the government or independently, they share in being excluded from the formal employment system. Some belong to families who have historically been excluded, while the 2001 economic crisis forced out others.

“I started to collect cardboard in the year 2002,” Gómez says. “Before, I worked as a bricklayer and a painter, and with that, I managed to pay for the expenses of my family. But after the crisis, I didn’t have a job. A neighbor told me that, in the street, he earned good money and that he also always found useful things.”

One day, Gómez finally decided to try it and left the house with a borrowed cart. That night, he brought back a washing machine and a mattress for his youngest daughter.

“I couldn’t believe it!” he says. “Who throws away a washing machine? It was almost new. It only had two scratches. From that day on, I went out every day.”

Around the same period that Gómez became a cartonero, Santiago was doing the same by day and sleeping in the train station at night.

By chance, he met people who were part of a political movement of excluded workers called Movimiento de Trabajadores Excluidos. He participated in the group’s marches and protests. He eventually joined with several other members of the movement to form a cooperative to process recyclable trash and began his new live as an urban recycler.

The members named the cooperative after the date they founded it – Nov. 30. The 12 members work eight-hour shifts from Monday to Friday and six hours on Saturday.

“The cooperative was a success that we co-workers didn’t expect,” Santiago says. “I didn’t think that we were going to reach here when I used to sleep in a tent in the station.”

For Néstor Omar Herrera, 53, being a member of Cooperativa 30 de Noviembre is a step up. Unlike Santiago and Gómez, Herrera says he was destined to work as a “ciruja,” or junkman, from the cradle.

“I was born a cartonero, or ciruja as we called them before,” says the short and dark-skinned man. “I’ve worked since age 15. With a little handcart, I gathered everything that could be sold.”

Like Santiago, Herrera is a man of few words. The thin man hardly stops to talk as he continues to work between the machines that flatten plastic and cardboard.

“I went from being a ciruja or cartonero,” he says, “and now I am an urban recycler.”

Spotlight Nonprofit: Building bridges to bring all people together
Comment
Spanish edition of popular book provides bilingual path for writers-to-be to tap into their creativity