By Natalia A. Bonilla Berrios
LatinaLista

UNITED KINGDOM — Eager for a change in their home country, hundreds of Mexicans abroad are demanding true democracy, fair results and social growth as the July 1st presidential election approaches.

And they found a way to make noise by expanding overseas a political movement begun in Mexico called Morena, an acronym for Movimiento Regeneracion Nacional (National Regeneration Movement), a 2006 idea by Andres Manuel Lopez Obrador (AMLO), current presidential candidate for the coalition comprised of the Party of the Democratic Revolution, the Labor Party and “Movimiento Ciudadano” (Citizen’s Movement).

At first glance, Morena seems to ask for too much in too little time. A nation-state less corrupt, less violent and poor; with more freedom of expression, freedom of the press and higher levels of education and health. Though these demands stand for a vision of a better democracy and future for the country, these members believe AMLO offers the answer for most of Mexico’s problems.

“In the short term, one of the main objectives is to help Andres Manuel Lopez Obrador win the upcoming elections and become the next president of the Republic, because it is with him that all changes will come for good, and though, we know that he is not a perfect leader, we are confident that he has the best proposals for our country,” said Balam Herrera, MA Digital Film and Television Production student at the University of York and member of Morena York, England.

All Morena members are aware that the country should not continue on the path it is going on right now, making international headlines for its violent and drug-related crimes. Arturo Jimenez, 22, one of the founding members of Morena France, will vote for AMLO because “is not only him but all the people behind him” that will tackle all these issues including looking after the most disadvantaged sectors of the population, like the indigenous communities, the homosexuals, and the handicapped.

As soon as Jimenez and his fellow ex-patriots read AMLO’s proposals, they knew they wanted to vote for him. “His project is the only one that lacks demagoguery,” he adds. 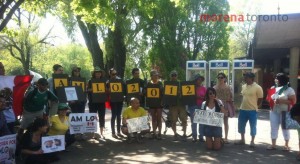 On May 20th, 2012, a surprising event raised hope in Mexico. A few months before, Morena France issued an invite to people with similar ideologies in Paris to join the movement. Around 100 Mexicans showed up that day with banners and slogans in support of AMLO. The event surpassed Jimenez’s expectations and spread beyond his imagination: participants of over 34 countries registered for the gathering and new headquarters were formed in Europe, Asia, Oceania and North America.

“What (Morena) France’s photo did for us was huge. It gave us more confidence in our belief,” said Grissell Olivares, 28, and one of the main members of Morena England. A native of Veracruz, Mexico she has lived for the past two years with her husband in the UK but she keeps in constant contact with her twin sister, Violeta, who keeps her updated about the situation in Mexico.

“I’m from Veracruz, a state governed by el PRI (Enrique Peña Nieto’s party) and it is difficult to live there. The drug war and the war between these families and the Zetas, these are secrets that everybody knows but don’t dare to say out loud because of fear,” she said.

When she sent the Morena’s meeting photo in Paris to her sister, Violeta persuaded her to organize a group in her town. A similar desire drove Alba Gray to start an alliance with Mexicans in Toronto. Their civic organization is established with a solid committee and plans for public events.

“We want fair elections and right now our purpose overseas is to encourage people to vote, to assure the legal operation of the IFE and the legality of the upcoming elections of 2012, we don’t want another fraud like the one in 2006 to happen again,” said committee member Andromeda Diaz.

Morena Toronto’s members are sure that AMLO will win the presidency next month. “Andrés Manuel López Obrador will be our next president and that’s a fact, not an assumption,” said Carlos Moreno.

Even though, it may seem that across the continents all Morena supporters hold tight to this dream. There are a few members who question whether the movement will keep on going if the final results do not favor their candidate.

After the elections, mixed perceptions about Morena’s future

Previously, AMLO has declared that he will not run again as candidate for the presidency if he does not win this time. Though he is not involved with Morena’s political movement, he will always be the symbol of hope for democracy in Mexico.

Yet the question remains: can Morena survive on its own?

Anaclara Castro, PhD student in Literature at the University of York, is not completely convinced. “I will want to be part of Morena, but to be honest, it’s probably going to dissolve afterwards. Maybe it will stay alive for a year or two but I don’t think it will continue because the elections are every six years, so it’s a long time. People don’t actually stay committed to something that looks far away,” she said.

Skepticism also comes from non-supporters of the leftist candidate such as Manuel Pereyra, 28, who’s rooting for candidate Josefina Vázquez Mota. “I think Morena is going to continue but it’s going to do it the same way they did before, by doing nothing. Like, they had six years from 2006 and they didn’t do anything. The only thing that Morena did is seek money for Andres Manuel so that he can go to any city and any village to talk. That’s the only purpose of Morena, have money for Andres Manuel,” he said.

However, Morena Toronto has figured out a plan to transcend AMLO’s ideas and look for justice for Mexicans abroad. They are creating a network of cooperation between Mexicans at the citizen level with the hope of keeping alive the discussion of solutions and defense of human rights of Mexico and natives abroad.

“Morena must live long beyond AMLO and ideally, it should transform itself into a citizen ‘muscle’ that motivates Mexicans to participate, demand and build an exemplary democracy,” said Herrera.