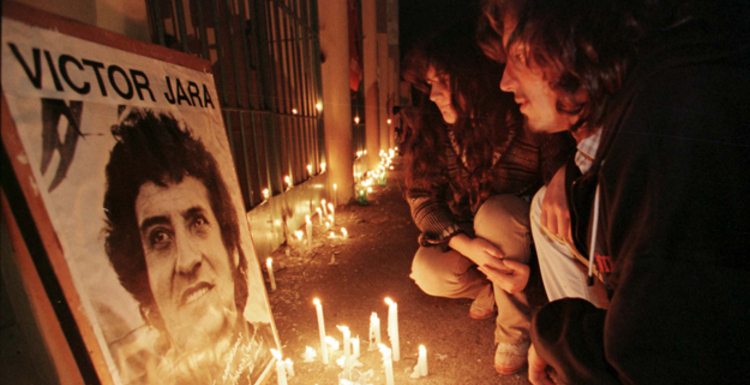 The Chilean military managed to overthrow Allende’s government in a matter of hours, plunging the South American nation into a bloody frenzy of state-sponsored terror that lasted from 1973 until 1990, when the country returned to democratic rule.

Tens of thousands of individuals were kidnapped and tortured, and around 3,000 desaparecidos were never found, presumably executed and disposed of. Popular Chilean musician Víctor Jara, known for his folk songs and political activism, was among those murdered. In a September 9 interview with the online news and analysis website, Democracy Now, his widow recounted her experiences on that day in 1973:

“Together Víctor and I listened to Allende’s last speech […] Víctor went out that morning. It was the last time I saw him.”

In 2013, Jara’s widow filed a lawsuit against Pedro Barrientos Núñez, a former lieutenant under Pinochet who is believed to be responsible for her husband’s death. Barrientos Núñez is accused of torturing and personally shooting Jara in the soccer stadium.

Such actions reiterate the necessity of uncovering past atrocities during the slow and painful process of achieving justice in societies recovering from human rights violations.

The Chilean coup unfolded amidst the fervor of the Cold War, which was anything but cold in Latin America. In a paranoid attempt to combat the perceived spread of communism in the region, the Nixon administration clandestinely sabotaged Chile’s economy while giving the country’s armed forces a green light to revolt.

These actions were part of a regional strategy known as Operation Condor, in which the United States supported authoritarian governments opposed to communism, while covertly sanctioning the assassination of political targets.

As military jets viciously bombarded the presidential palace in Santiago, President Allende dismissed his staff before he committed suicide by shooting himself (speculation continues about whether or not he was murdered, though the latest autopsy reports confirm suicide).

Soon thereafter, the Chilean junta, headed by General Pinochet, began to detain political dissidents. Many of them were sent to a local soccer stadium, ironically serving as an impromptu prison. Hundreds of others were tortured in a detention center known as Villa Grimaldi, including former Chilean President Michelle Bachelet in 1975.

Inside the soccer stadium, officers savagely beat Jara before finally shooting him – a violent death in stark contrast with his songs’ themes of equality and social justice. Mrs. Jara filed the lawsuit in a U.S. court, as Barrientos Núñez currently resides in Florida.

According to Pascale Bonnefoy’s September 5 article in The New York Times, “Chilean’s Family Files Suit in U.S. Over His Torture and Death in ’73,” the lawsuit against Barrientos Núñez was filed through the Center for Justice and Accountability, a human rights organization based in San Francisco. The judicial procedure falls under the Alien Tort Statute and the Torture Victim Protection Act, which allow victims of international crimes to seek justice abroad, rather than in their home countries.

The military dictatorship was responsible for at least several thousand deaths from 1973 to 1990, though exact numbers are hard to corroborate. Aside from operating out of clandestine detention facilities like Villa Grimaldi, the bodies of political prisoners were buried in mass graves or thrown into the Pacific Ocean. Human remains continue to be found sporadically throughout Chile.

While a lawsuit cannot change the horrors of the past, it is certainly a step in the right direction towards national reconciliation. Furthermore, it sends a strong message to all perpetrators of human rights violations that they are not impervious to the law, and that time will not absolve them of their criminality.

While Pinochet died a free man in 2006, countries such as Argentina have successfully jailed former junta generals accused of military crimes. As it is impossible to bring back the victims, or even locate many of their remains, transitional justice is sometimes defined by symbolic measures with heavy emotional significance.

For example, Chile’s Museum of Memory and Human Rights, inaugurated in 2010, exemplifies the value of connecting with the past in an effort to overcome national trauma.

In 2008, the American band Calexico released a song titled “Víctor Jara’s Hands,” a reference to how they were purposefully broken as he was being tortured. Meanwhile, Rolling Stone Magazine also named the Chilean musician one of 15 true “Rock and Roll Rebels” in 2013. Jara’s music remains popular in Chile and around the world and while he may be gone, his message and ideals have not been forgotten.