Mexico: A Gringa’s View of Christmas in Central Mexico

GUANAJUATO, MEXICO – To be perfectly honest, when in the USA I hate leaving the house in December. It seems to me that “rushing for more shopping” is the main focus in December in North America. The month is a time of overspending combined with physical and emotional exhaustion. 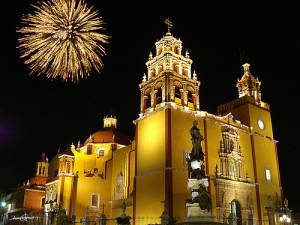 In 2005, when I got emails and photos of December in Guanajuato, I was startled, because people were walking, talking, visiting, and enjoying the lights and other decorations. No one was burdened with shopping bags. No one appeared to be hurrying someplace. I was told fireworks were popular and home visits. Gifts were not common among adults or children.

After moving to Guanajuato in 2008, I learned that December 12th, the Day of the Virgin, fireworks begin at 5am and last for a month. Yes, that is true in our village. Night and day from December 12th through mid January (this year it is the 15th) there are fireworks going off night and day — one narrow house lot from our home.

“Las Posadas” begins on December 16th to the 24th of December – nine nights of chanting and walking all over the neighborhood. Wikipedia says: The procession has been a tradition in Mexico for 400 years. The procession goes from house to house looking for a place for the Christ child to be welcomed in. All ages join in and are a major part of the event.

There is no separation of church, school, and/or state in rural Mexico.

Regardless of anyone’s belief system, the Roman Catholic and native pagan traditions blend in each village to form the basis of most aspects of daily living. Schools in Mexico are either closed or focused on faith from December 12th until after January 6th.

“Dia de Reyes” – Kings Day is January 6th, that is the day when gifts are given to children under the age of 10. All days there are events for children and they receive gifts from the government and friends or family. Everyone else eats “Rosca de Reyes,” a wreath-shaped sweet bread that has a plastic infant cooked inside the bread. The person who finds the Christ child icon is expected to host a party on Candlemas “Dia de la Candelaria” on February 2nd and serve tamales.

For many years, I have felt that religion is the way we mortals find value in ourselves. By knowing that something omnipresent and divine loves us, we are able to cope.

In rural Mexico, I see this reality in every aspect of life, but most clearly at Christmas and Easter. The native people live with almost no assets in a hopeless economic situation and yet they continue to function. I believe it is because they have deep faith.

Personally, I prefer to observe these sincere expressions of faith, than to dodge cars and people in the USA in an egocentric attempt to outspend each other.

Dr. Jacqueline Zaleski Mackenzie is the first researcher to permanently relocate to an indigenous village in Central Mexico.
Mackenzie’s goal was to figure out why 49 percent of Hispanic students failed to graduate in the USA.

Mackenzie conducted research in rural Mexico beginning in 2005. She has combined the information she gathered: scientific research, statistical analysis, and personal exploits to produce an easy-to-read textbook titled Empowering Spanish Speakers – Answers for Educators, Business People, and Friends of Latinos.

Dr. Mackenzie’s book is evidenced-based, based on scientific research. Her approach is that by emphasizing teaching techniques that bring out the highest learning results and engagement for Latinos, more Latino students will graduate from school.

The book is owned by the nonprofit Summerland Corp. Therefore, book sales funds building rural libraries in Mexico that should reduce emigration from Mexico (making both sides of the political fence happy).