By Kathleen B. Lowenstein
The MexPatriate 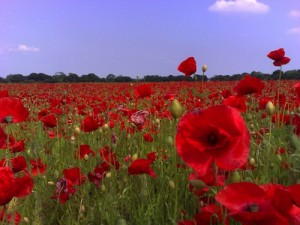 Between 2007 and 2012, poppies surpassed marijuana as the most widely grown illegal plant in Mexico. In fact, by the end of last year the authorities estimated that poppies occupied 40% more land than cannabis; in 2008, only 210 kilos of opium gum were seized by Mexican law enforcement but by 2012, the amount ballooned to 1.4 tons.

Mexico and Colombia are competing for the US market, with Mexico supplying approximately 39% of heroin consumed in the country (mostly west of the Mississippi), according to United Nations statistics. The SEDENA (Department of Defense) reports that poppy farms have been detected in 25 Mexican states (out of 32); Guerrero, Durango, Chihuahua, Sinaloa and Nayarit are the biggest producers. 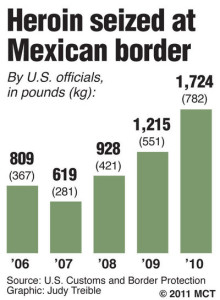 “Marijuana is the most commonly used illicit drug in the United States, with nearly 17 million Americans age 12 and older reporting past-month use”, according to the Office of National Drug Control Policy. And marijuana use has increased since 2007. So why are Mexican growers abandoning it in favor of a crop that yields a drug used by only about 2 million people in the US?

Since drug trafficking is a business, it’s logical to assume that poppies have proven more profitable than weed. How is this possible?

The price of marijuana has dropped, particularly in the 18 states where medical marijuana is legal. Mexican growers are now competing with US and Canadian growers who produce higher quality, indoor-grown, “artisanal” pot. Back in 2010, even some California growers were getting worried about falling marijuana prices; “California’s pot economy is transforming, and it’s starting to resemble a real commodities market where only big players can compete. It’s a shift that could leave some growers in the dust,” noted an NPR report from May 2010.

Apparently, some of those concerned about being left in the dust were farming south of the border.

Marijuana is also a bulky product to transport; opium gum is more compact and easier to smuggle. It’s simple economics: give up on selling a high-risk product (bulky) that is yielding less profit and turn towards a slightly lower-risk product (compact) that you can sell at a higher price.

Apparently, both Mexican and Colombian drug traffickers have been working to assure that heroin is as widely available as other drugs in the United States. In a 2012 article on Redding.com, the author corroborates the division of territory by the two drug producing countries and adds that “experts are seeing heroin addiction treatment admissions, overdoses and fatalities rising in nearly every region, including areas where the drug has seldom been seen before.”

What does this mean for the war on drugs?

First, it reveals the efficient operation of this gargantuan underground business which is as quick to find the highest profit as any legal capitalist enterprise. But it also makes one wonder about how effective drug legalization in the United States would be in diminishing the power and success of drug cartels.

The legalization of marijuana in the US is making headway and it feels like it’s only a matter of time before it will no longer land you in jail. It will be regulated and taxed, like its more destructive cousins, alcohol and tobacco. But if the drug suppliers just switch to another more profitable, more addictive product – heroin or methamphetamines or something we haven’t even heard of yet – how can they be defeated?

Legalizing all drugs (including the most deadly and addictive), thus driving down the price, might be the only way to truly make a dent in the cartels’ revenue. But what price do we pay in more addicts and overdoses?

NPR, Plummeting Marijuana Prices Create a Panic in California (May 2010)