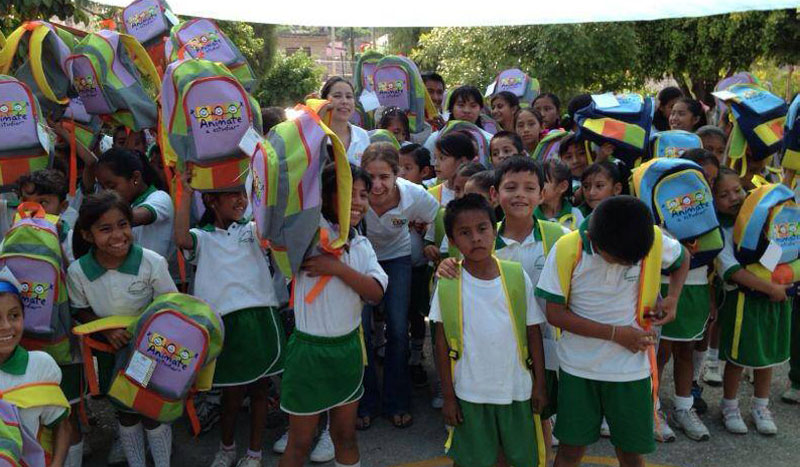 The Mexican NGO Anímate a estudiar has benefited more than 3,600 students in a country where more than a million students drop out annually.

MEXICO CITY, Mexico – The NGO’s name says it all: “Anímate a estudiar” (Get Motivated to Study).

This Mexican NGO seeks to combat truancy in the country and motivate children to stay in school.

The project, which began in 2004, has benefited 3,635 students from public and private schools by providing backpacks with school supplies and scholarships and helping fulfill the dreams of those who stand out in the classroom.

One of the NGO’s main programs is “Fulfill a Dream,” which consists of granting the best students from the first six grades of primary school a wish that is within the institution’s reach.

“We ask the children to provide us with up to three options. Normally, they ask for toys, bedding, clothes or trips, which must be within the established limit of $1,200 Mexican pesos (US$91.11),” said Daniela García Galván, who coordinates the project. “The prizes cannot be electronic devices or promote violence.”

The children are monitored throughout the year. First, members of the NGO visit schools, give motivational talks and stress to students the connection between studying and a better quality of life.

After a few talks and two months before the end of the school year, teachers provide a list of students with the best grades, as well as those who were the most dedicated in the classroom.

The project’s leader returns to the schools and meets with teachers and other school officials before choosing the recipients of the awards, which are given in early July, when the school year in Mexico ends.

“Our focus is on children who have made notable efforts to change their attitude,” García Galván said. “It doesn’t matter if their grades weren’t the best: We’re recognizing their dedication. If they were messy and straightened up or if they were lazy and started to try harder – we try to motivate them in this way, through a positive change.”

Businesses and citizens support the project through donations. It’s up to schools to enroll in the program through the NGO’s website.

To participate, institutions must send information about their operations and financial condition. Priority is given to schools, orphanages or shelters with the fewest resources, García Galván said.

During the most recent school year (2012-2013), 23 institutions in Mexico City, Puebla, Morelos, Zihuatanejo, Mexico State and Querétaro were served. The project delivered 1,200 backpacks and fulfilled more than 135 student dreams by providing items such as clothing, uniforms, dolls, games and soccer balls.

“We’ve shown progress in the fight against truancy through these programs,” García Galván said. “Many people have come together with the certainty that they can help make a change. In recent years, the violence has sent the wrong message to the world about who we are in Mexico. We have problems, but we also have many positive qualities.”

The NGO also offers the “Get Motivated Scholarship,” which provides financial aid to students in the last three years of primary school and throughout high school. The aim is to encourage them to continue their studies.

At the end of the last school year, the association provided monthly scholarships between $550 and $650 Mexican pesos (US$41.72 – US$49.31) to 156 students nationwide. Students also participate in workshops with their parents, reading groups and tutoring sessions, in addition to receiving career advice.

More than a million children and young people drop out of primary school and high school each year in Mexico due to poverty, lack of interest, repeating grades, being bullied or unplanned pregnancies.

In response to this alarming rate, the Mexican government earlier this year announced a national plan to reduce truancy.

In the case of primary education, the Ministry of Education plans to enlist the help of extra teachers who will be responsible for ensuring the academic calendar is respected, schools receive appropriate books and materials and students participate in the activities proposed by their schools.

The “I Won’t Drop Out” program will rely on the support of teachers and parents to help identify high school and college students with the highest risk of dropping out so it can keep them enrolled in school.

About 650,000 students drop of high school annually in Mexico, a rate of 3,250 a day, meaning when they close the door on their education, they’re also shutting the door on an opportunity for a better life.