GUANAJUATO, MEXICO— In the little village of Nuevo Cajones, outside Guanajuato, November 12th was the date I had to be home because Janet was celebrating her Quinceañera that day, certainly a great deal more than a 15th birthday party.

Western society might call it a “coming out party,” but in Latin America the event has a far greater meaning related to family pride and the public joy of raising an accomplished and respectful daughter.
Janet lives right across the dirt road from our modest campesino home. Her family has been a part of our lives since we three adults moved to the campo in early 2008. Our nonprofit, Summerland, designed and built a community center (Resplandor) owned and now run by another nonprofit, but an enhancement to the lives of all the children in the village. 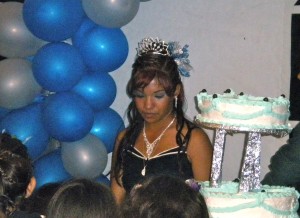 This was to be an exciting day for her and for us since we volunteers and Gringo neighbors had been invited to participate in the toast to Janet. We were very humbled and surprised by this honor. We teach because there is a need, not for public acknowledgement.

For months ahead of the anticipated date, Janet was rehearsing dancing with the twelve young men who would be her attendants during the event and the single dancing instructor who was Janet’s partner for several numbers with her alone. Although, in July 2010, we had helped our next-door neighbor with the photos, invitations, and other small items related to her Quinceañera, we were in no way prepared for what we experienced November 2011.

The day before a large stage was erected. Four large portable ramadas were put into place as seating for 450 people was positioned. We loaned the parents large tables and chairs to use behind their home where food – pork, rice, beans, tortillas, salsa – and drinks for 450 was prepared. The entire visitor’s area was next-door in the yard of another family member. Parking spaces were outlined on ground chalk and a large blow-up playground was installed.

In the small indigenous village, everyone would either be a part of the event and/or hear it.

The festivities began at 1pm at the small chapel a few house-lots down the road. The mariachis began playing at 2 pm; about 4 pm a 22-piece orchestra began and continued until midnight. Each aspect of the event was fine-tuned. There were professional-grade dances with Janet and the twelve youthful males – including one who is totally deaf.

There were invited greetings with every family member being honored. Her blind grandfather sang to her in honor of her special day. Each relative came forward to show respect, including her siblings. Finally, her father removed her casual silver slippers and replaced then with the fine silver slippers of an adult woman.

After all the rehearsed dancing and family honors, the toasting by “maestras” (teachers) Jolene and Jacquie – my soul sister and I – proceeded with the sharing of cake and champagne. The rest of the evening was devoted to sharing more beer, tequila, and dancing by the attendees.

The parents had saved for years to pay for the hired participants, most guests had contributed to the costs, and many family members and extended family worked throughout the event. The community involvement is typical of this lifestyle. Those who live elsewhere have no idea what they are missing. The culture is rich with ritual and tradition that are priceless to share.

Dr. Jacqueline Zaleski Mackenzie is the first researcher to permanently relocate to an indigenous village in Central Mexico. Mackenzie’s goal was to figure out why 49 percent of Hispanic students failed to graduate in the USA.
Mackenzie conducted research in rural Mexico beginning in 2005. She has combined the information she gathered: scientific research, statistical analysis, and personal exploits to produce an easy-to-read textbook titled Empowering Spanish Speakers – Answers for Educators, Business People, and Friends of Latinos.

Dr. Mackenzie’s book is evidenced-based, based on scientific research. Her approach is that by emphasizing teaching techniques that bring out the highest learning results and engagement for Latinos, more Latino students will graduate from school.

The book is owned by the nonprofit Summerland Corp. Therefore, book sales funds building rural libraries in Mexico which should reduce emigration from Mexico (making both sides of the political fence happy).

Previous Post Campaigns across the country remind people to not start 2012 shooting their guns in the air
Next PostForget what's your sign. What's your dosha?

Campaigns across the country remind people to not start 2012 shooting their guns in the air
Comment
Forget what's your sign. What's your dosha?