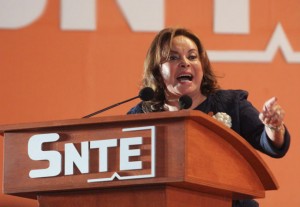 The notorious leader of Mexico’s National Teachers Union, Elba Esther Gordillo, was arrested at the Toluca airport on Tuesday afternoon (after disembarking from her private jet) and charged with embezzlement of union funds amounting to more than $200 million dollars.

“La Maestra” has long been a publicly reviled symbol of corruption whose formidable political power has hampered efforts to reform the educational system for decades. The Sindicato Nacional de Trabajadores Educativos (National Teachers Union, SNTE) is the largest teachers union in Latin America and Gordillo has been its leader since 1989; she was known as the most powerful woman in Mexico.

“Extravagant, corrupt, indestructible, demanding, bold, perverse and ambitious are some of the adjectives that have been used to describe this character, for more than two decades the ‘leader for life’ of one of the strongest and most powerful unions in Mexico.”

That loud humming noise you hear is the Mexican news outlets abuzz with this gargantuan story – Milenio‘s headline read simply, “La tumbaron” (“They toppled her”). Many Facebook comments I saw when the story broke expressed disbelief: could it be true?

Gordillo had survived the vicissitudes of Mexican politics longer than almost anyone and was a rainmaker for politicians of all parties. She was an influential priista but when the winds shifted in 2000, she hastily formed alliances with the opposition: first, with Vicente Fox and then with Felipe Calderón.

She became Secretary General of the PRI in 2002 but after a battle with PRI presidential candidate Roberto Madrazo in 2006, she left the party and founded her own: Partido de Nueva Alianza (New Alliance Party or Panal). In 2007, she managed to get a regulation passed to eliminate term limits for the president of the SNTE.

During her 22 years as the “lideresa” of the union, she doggedly opposed educational reform in “defense” of the nation’s teachers, all while ostentatiously parading her Louis Vuitton handbags and increasingly stretched, nipped, tucked and painted face.

The charges brought by the National Attorney General’s Office (PGR) relate to illicit use of the funds from two SNTE accounts by Gordillo and three other union members, one of whom made 22 transfers to Neiman Marcus between 2009-2012 for a total of $2,100,000 dollars. But this is the tip of a Titanic-sinking iceberg: there are 78 other SNTE bank accounts that have not yet been investigated.

As Gordillo sits in a prison cell (she was denied bail), the pundits have begun dissecting her political cadaver – with the caveat that she has made comebacks in the past and it’s too early to declare her power officially dead. Many observers have also cautioned that the prosecution better stick to the letter of the law and “super due process” (in the words of Raúl Benítez Manaut, a researcher at UNAM) lest Gordillo find a loophole to scramble through.

The post-mortem analysis has so far highlighted her recent battles with President Peña Nieto over his educational reform legislation and the old PRI grudge against her opportunistic alliance with panistas and her decision to found a new party. The enemies made over so many years manipulating the Mexican political game may have finally converged, deciding that revenge is a dish best served by the police upon return from one’s vacation home in San Diego.

But as photogenic as this arrest is for Peña Nieto’s administration, can it really signal a change in Mexico’s attitude towards corruption?

As Luis Carlos Ugalde, former president of the Federal Electoral Institute (IFE) commented: “I hope that in twenty years we remember this day as the beginning of a head-on battle with impunity, not just a tactical move made for the applause.”

Others have pointed out that the executive branch is trying to purge political actors whose de facto power challenges the government’s sovereignty: Elba Esther and the SNTE is but one example. “No modern state can tolerate extra-governmental powers the size of Elba Esther…So, if you’re corrupt and also challenge the state’s power, you’ll probably end badly,” noted Jorge Chabat, a professor at CIDE (Center for Economics Teaching and Research).

What kind of impact could the money ($2,600 million pesos) spent on vacation homes, designer clothes and private planes by Gordillo and her cronies have on Mexico’s education budget? Animal Político made a list – here are some selections:

In the last television interview before her arrest, Elba Esther denied being the “most hated woman in the country”, adding that “no one is more beloved by her own than I am.” On her 68th birthday on February 6, she shared what she wants to be her epitaph: “Here lies a warrior, who died fighting.”

corruption, education, featured, Mexico
Previous Post Video: The gap between the have's and the have-nots bigger than anyone imagined
Next PostLatinas shifting the racial makeup — in prison

Video: The gap between the have's and the have-nots bigger than anyone imagined
Comment
Latinas shifting the racial makeup — in prison