Mexico’s Inauguration Day: Two battles rage — one for social fairness, the other for justice 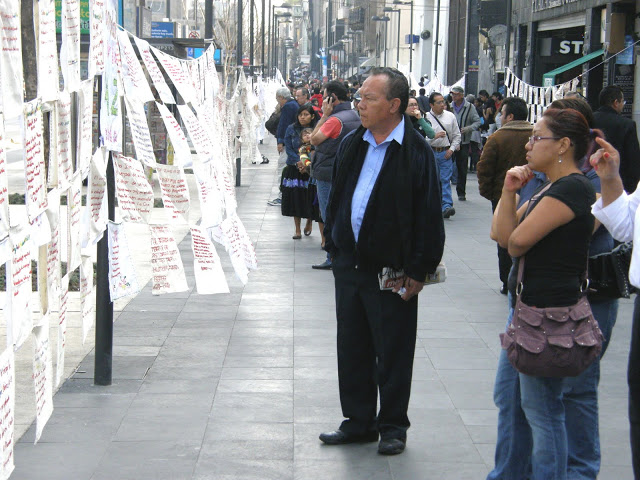 MEXICO CITY — Elia Andrade Rojas and I sit down on a bench on Avenida Juárez. She was telling me about her collective’s mission to embroider handkerchiefs, (pañuelos), of the dead and missing of Mexico’s drug war.

They exhibit them along two long city blocks, across the street from the Monument of Benito Juárez. It was a gripping sight. Hundreds of pedestrians stopped to read what the pañuelos said.

Bordando Por La Paz, the collective Elia formed, originally planned to put its silent but moving demonstration up in the Zócalo, the national square, across the street from the National Palace. But the square was closed off to public demonstrations.

President-elect Enrique Peña Nieto was to arrive there after he was sworn in as president at the Congress, across town. The Felipe Calderón administration, responsible for the drug war escalation, was now leaving office, succeeded by Peña Nieto, who was taking the constitutional oath of office before noon.

Elia and I talked from one of the new iron benches on the sidewalk across the street from the Juarez monument where the collective’s exhibit was set up. She is also the founder of the Fuentes Rojas collective, their name symbolizing the action taken a year ago of putting red dye in public fountains as an outcry over civilian deaths from Mexico’s drug-war escalation.

Elia’s mission of embroidering the handkerchiefs began in August 2011, with two major public displays in the next five months. In March 2012, the embroidery, intended to attest to each individual’s violent death, was taken up at Parque Rojo in Guadalajara.

Then it got picked up in the neighboring state of Morelos, where people there embroidered in red and green to represent disappearances. People in the state of Puebla started. Nine months after the collective began, a group in the far northern border states of Coahuila and then in Nuevo Leon, began embroidering, adding text in red and a number. By then, it’s estimated 4,000 handkerchiefs had been done.

Yet, they have a long way to go. They have as many as 90,000 to produce, accounting for “one handkerchief, one victim.” Elia reflects.

She started on this mission because she felt indignant about the killing of people. “I was not at peace,” she explained. The moral outrage and disquiet came at the time poet Javier Sicilia’s son, with six other youths, were murdered by elements connected to organized crime.

She heard a reading of María Rivera’s protest poem, “The Dead,” which says: “They are called / the dead that no one knows that no one saw killed.” In the poem, Rivera objected to anonymous death, victims’ names going mostly unknown. The pañuelos intend to undo that.

This was the street battle of conscience I had expected to witness. Then the first explosion went off.

It was like that of a muffled ceremonial cannon, honoring a head of state. Elia was telling me about the poem that compelled her on her mission when a collective member interrupted. It was better if they took down the exhibit. She said they could take it a dozen blocks away to the Monument to the Revolution.

When the second explosion went off, closer, I lost sight of Elia.

The other fight was starting. This one was not a metaphorical one over conscience but a street battle.

The crowd was now running away from the Historical District. Blog Mexico Voices editor and photographer John Reed Brundage and I went against the crowd in the opposite direction. Then the next explosion went off.

We headed toward the Palace of Fine Arts. A commotion ensued. A riot police line formed in front of the Palace.

While most people retreated, up came ski-masked combatants. Some others wore outlaw bandanas over their faces. They wore improvised helmets. Some bore wooden shields or used garbage can lids. They seemed mostly young, in their 20s, both men and women alike. Some held metal bars like swords, the longer ones like lances.

Molotov cocktails were sporadically hurled into the air. Some scored direct hits on the riot police shields and behind their lines.

The frontline combatants kept up a barrage of assaults with stones, bricks, glass and Molotov cocktails. Metal signs and parts from signal lights were knocked down to use as ammunition. The rebels were daring, the police restrained.

El Universal, one of this city’s major dailies, reported that about 65 persons were being detained by police on vandalism charges. Nine cities, from the northern to the southern border, also reported demonstrations in opposition to the installation of Enrique Peña Nieto. The same source, the next day, reported 121 injures in Mexico City.

Symbolically, many see Peña Nieto’s election as the return of authoritarian rule by the Insititutional Revolutionary Party (PRI by its Spanish initials). That party was defeated twelve years ago for the first time in 71 years by the opposition National Action Party (PAN in Spanish).

PAN’s failures, rather than acceptance of PRI’s assurance it is rehabilitated from its authoritarian ways, put the old party back in power.

The street rhetoric was fervent but spoke of democratic wishes and social fairness.

On his last day in office as mayor of Mexico City, Marcelo Ebrad said the Federal District had never experienced a provocation of this size. Historically that is not true. But the disturbance was large in scope. He added this had nothing to do with acceptable political protest.

“We condemn all barbarous acts,” he said.

Elvira Martinez Herrera, 60, a thin, frail woman with a low voice stood beside heavily shielded riot police near the Monument. She held up the stained image of a Mexican eagle.

Six more years of the same isn’t possible, she says.

(José de la Isla, a nationally syndicated columnist for Hispanic Link and Scripps Howard news services, was been recognized for two consecutive years for his commentaries by New America Media. His next book, The Rise of Latino Political Power, will appear early in 2013. Reach him at joseisla3@yahoo.com.) ©2012