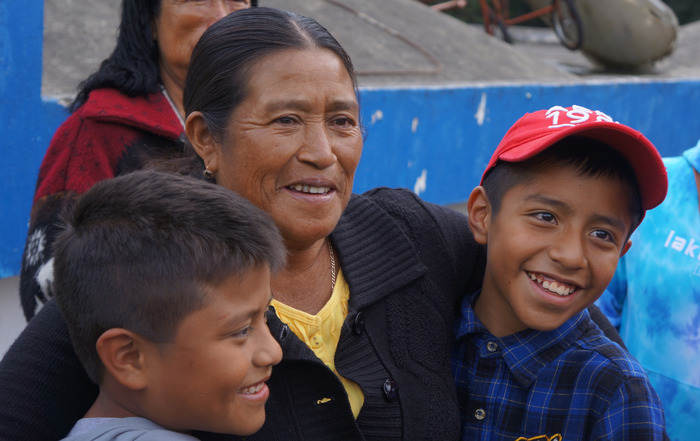 Today in the United States there are 4.5 million US citizen children who have at least one undocumented parent. Even though they are entitled to the same rights and freedoms as all Americans, many of these children grow up with the constant fear of familial separation. Since parents cannot go back, and grandparents cannot come visit, a generation is being punished by a broken immigration system.

Lisa M. Kremer, of Worthington, Minnesota, saw firsthand what these separations were doing to a local community of Guatemalan families.

She decided to organize a trip to Guatemala when a close friend asked her to visit her family for her in Guatemala. Seeing the need for these children to reconnect with their families in Guatemala inspired her to create a special project she dubbed Abuelos y Nietos Juntos.

“That, I think, was the real inspiration for Abuelos y Nietos because I felt the strongest sense of guilt and I was really struck by the injustice of that and the thought was: the parents can’t go, but most of their children are US born citizens and they have the same rights and freedoms that I do.”

So, after much planning, preparation and fundraising, in July 2013 a group of ten volunteers took 14 children to Guatemala. They met not only their grandparents, great-grandparents, aunts, uncles and cousins, but also siblings. One boy even saw his mother for the first time in four years.

“It was a moment like no other when these children were literally enveloped by their families of origin – by the grandparents and aunts, uncles, cousins, and in two cases, siblings, who had been waiting years to meet these children. I can’t even begin to describe what that was like. There were smiles, tears, and close embraces that had been awaited for too long. It was probably one of the most incredible and defining moments in my life,” said Kremer.

“I believe that this has been a touchstone in the lives of these children, and it will help to define who they are and what they will do with their lives. Some of them already talk about a future that involves both Guatemala and the US, and they take very seriously their opportunity to be a symbol and a spokesperson for so many children like them.”

Guatemalan-American filmmaker Luis Argueta, known for his film abUSed: The Postville Raid, traveled with the group to document their journey and highlight the importance of heritage.

“I’m beginning to realize that this is much larger than one grandchild meeting a grandparent. This is part of an effort to reconstruct collective memory and repair the broken links of knowledge and tradition that are passed from generation to generation. The whole process makes me cry tears of joy and deep sadness,” said Argueta.

The film documents the 3,000-mile journey of the 14 children who traveled from Worthington, Minnesota, to San Marcos, Guatemala, to meet their grandparents and learn about the land their parents once called ‘home.’

Abuelos y Nietos is hoping to make a similar trip next year to reunite another group of US born citizen children with their grandparents in Guatemala.

To learn more about the project, visit the documentary’s Kickstarter campaign.

Guest Voz: Becoming a Multilingual Nation: The Challenge and the Promise
2 Comments
Latina Republican joins crowded list to be next Texas governor