LatinaLista — The world is suffering from a global food crisis, says a new report by the international human rights organization Oxfam. That’s not new or surprising news. The high cost of food at the grocery store is an easy tip-off but Oxfam says it goes much deeper than that. 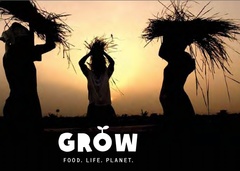 We now risk a wholesale reversal in human development. There will be real price rises for staple grains in the range of 120 to 180 percent within the next two decades, as resource pressures mount and climate change takes hold.

Trying to wake the world to this crisis, they claim has a solution, Oxfam released today the report Growing a Better Future: Food justice in a resource-constrained world.

The report outlines how today’s food supply is already under seige: climate-impacted crops either reducing output or totally destroying it; diminishing water supplies and how the high cost of food is driving families into poverty.

The report notes that the divide between the “haves” and the “have-nots” is only getting wider and those countries considered food plentiful waste as much as they consume while almost one billion people go without food in the developing world:

The simple goal of the Grow Campaign is to ensure that everyone on the planet has enough to eat. The more complex objectives involve: transforming the food system; making the food system more equitable and creating a new global governance to avert food crisis.

Oxfam groups these objectives under the term “new prosperity.” Citing examples from Vietnam and Canada where grass roots organizations played a part in their governments address of food aid and agriculture, Oxfam feels the solution to the hunger crisis lies with citizens demanding change from their governments:

From the bottom, networks of citizens, consumers, producers, communities, social movements and civil society organizations will demand change from governments and companies – shifting political and business incentives through the decisions they take and the choices they make. Whether through leading low- carbon lifestyles, buying Fair Trade goods, or demanding change in the streets or through the ballot box. Oxfam’s campaign will work with these groups, and many others like them, to amass irresistible momentum for change. Together we will challenge the current order and set a path towards a new prosperity.