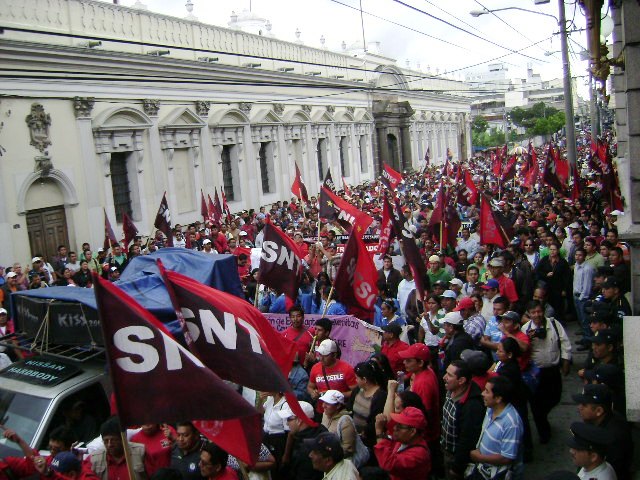 Four more trade unionists have been attacked in Guatemala in what are believed to be coordinated incidents.

“My first reaction was one of terror and uncertainty,” said Dora. “I felt really agitated each time the phone rang and was worried for my children, for their children and their partners.

“But I’m not going to resign or hide, because a true leader has to lead by example. I haven’t stopped going to work for one day.”

Guatemala is considered to be the most dangerous place in the world to be a trade unionist, according to the International Trade Union Confederation. In the past five years at least 58 trade union members have been killed in the Central American nation and no-one has yet been jailed for the crimes.

Labor officials estimate that the real number is a lot higher, and say that if the situation does not change soon, Guatemala could face losing its free trade agreements with Europe and the United States.

During the last few months several high-level international delegations have visited Guatemala to examine the situation and urge the government to investigate the high volume of trade union deaths.

In September, the International Labor Organization (ILO) returned to Guatemala to assess whether the situation had improved since its last visit in March.

“There are some signs of change, but it’s all going too slowly,” said Luc Cortebeeck, President of the ILO’s Workers’ Group. “The changes are the result of the influence of international actors, but the power of the landowners and capital-owners remains strong.”

Public Services International (PSI), a global trade union federation representing 20 million public service workers, including those of SNTSG, met with Perez Molina back in August. Last week the general secretary, Rosa Pavanelli, appealed to his government to again speed up investigations into the country’s 58 murdered unionists.

“We urge that you as President, and the authorities of the Public Ministry, the National Police, and the Ministry of Interior, order an immediate and thorough investigation into these cowardly acts and use the full extent of the law so that those responsible are arrested and tried promptly.”

The Guatemalan government insists it is doing all it can to improve the situation in the country.

“In March of this year, we set up a trade union roundtable with the Interior Minister and all of the trade union leaders,” says Carlos Contreras Solórzano, Guatemala’s Labor Minister. “The aim is to develop prevention policies to avoid and prevent attacks against workers and leaders of the trade unions and to exchange information in order to combat the criminals or perpetrators.”

However, last week’s attacks would suggest that this approach is not working.

Luis Lara has been a trade unionist for 20 years. In 1994 his 12-year-old son was killed while waiting at a bus stop and the following year his daughter was kidnapped and shot.

“This all happened because I was involved in el sindicato” said Lara. “I felt that my life changed completely when they killed my son […] But we keep on fighting because there’s no justice for workers here.”

The ILO will decide at the end of October whether or not to instigate a Commission of Inquiry in Guatemala, which is the highest-level of investigative procedure and has only been performed 11 times in ILO’s almost 100-year history.

“For Guatemala, it could be very bad news for the trade agreements with U.S.A. and Europe, and for the cooperation programs,” said Cortebeeck.

(Featured Photo: More than 25,000 Guatemalan workers gather outside the National Palace in the country’s capital to protest against labor conditions and poor contracts.)