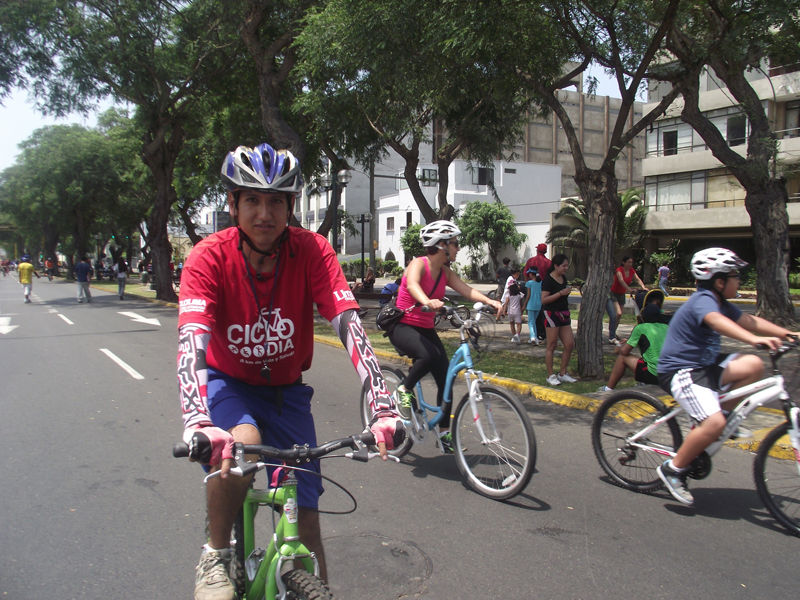 Lima’s municipal government, which is encouraging people to ride bicycles, plans to interconnect bike lanes with buses, trams and the metro.

LIMA, Peru – Residents of the Peruvian capital are trying to keep ahead of traffic, pollution and health problems by promoting the use of bicycles.

Lima is the most polluted city in Latin America, according a report on environmental pollution published by the World Health Organization in May.

The air that Lima residents breathe daily contains high levels of sulfur dioxide, which is produced by emissions from buses, cars and trucks, according to José Silva, an environmental quality specialist at the National Meteorology and Hydrology Service.

No more than 10,000 public transportation units should be in service in Lima, but there are close to 26,000, according to the Peruvian Automotive Association.

That is why authorities are encouraging bicycle use, said Fiorella Merchor, coordinator of Non-Motorized Transport Infrastructure for the Metropolitan Municipality of Lima.

“Bicycle use is a real solution to the problem of vehicular congestion,” said Mariana Alegre Escorza, the general director of the NGO Lima Cómo Vamos (Lima How Are We Doing). “A [bike transit] system with parking spots that offers help and safety for bicyclists will be very important.”

Promoting the use of bicycles and building bike routes are part of transportation reform in the capital, Lima Mayor Susana Villarán told Congress in June.

“The objectives of the reform include cleaning up the air and speeding up vehicular transit, [and so] greater bicycle use is fundamental for our goals,” Villarán said.

Among those Lima residents who get around on two wheels is commuter José Bryan Céspedes Malpartida, 24, who bicycles 50 kilometers daily from San Martín de Porres district to downtown Lima and back.

“Getting from home to work takes me between 35 and 40 minutes. Public transit would take an hour and a half at least,” he said.

Only 7% of the 8.5 million Lima residents use bicycles to get around. In Cali, Colombia, the figure is 12%, and in Rio de Janeiro, it is 16%, according to “Perception of Quality of Life,” a study released in February by Lima Cómo Vamos.

“Biking to school or work allows us to maintain our weight and prevent a variety of diseases such as cancer, diabetes, hypertension and osteoporosis,” said Roger Torres, executive director for the Promotion of a Healthy Life at the Ministry of Health.

Exercises like walking or bicycling six kilometers a day could lower mortality rates from diabetes and cardiovascular illness by 40%, Torres added.

To encourage bicycle use, the Metropolitan Municipality has closed Arequipa Avenue to motorized vehicle traffic every Sunday since 2011, transforming it into a 6-kilometer cycling route uniting downtown Lima with the Lince, San Isidro and Miraflores neighborhoods.

“The big advantage is safety, to be able to get out there and be apart from car traffic,” said Rolando Pampa, 20, who rides 24 kilometers every Sunday as part of his routine to stay in shape.

Additionally, anyone without a bicycle can rent one on this route for between US$3 and US$6 per hour.

Throughout Lima, there are 126 kilometers of cycling routes, and the city wants to add 300 kilometers, Merchor said.

In the first quarter of 2015, cycling routes will be built in some of Lima’s largest districts. These include San Juan de Lurigancho, with a population of over a million, and Villa El Salvador, home to nearly a half million people, according to the National Statistics and Information Institute.

“This is a new problem for municipal authorities, who should issue new standards regarding cyclists’ transit rights, parking areas and compliance with traffic signs,” he said.

Education indeed is part of the initiative, Merchor said.

“We are developing infrastructure, and the remaining task is to educate people and raise awareness so that we can someday live in a less polluted society,” she said.

Featured Photo: José Bryan Céspedes Malpartida, 24, cycles 50 kilometers daily, from San Martín de Porres district to downtown Lima and back. The one-way trip doesn’t take him more than 40 minutes, but it can take more than an hour by bus, depending on the time of day. (Pedro Hurtado Cánepa for Infosurhoy.com)