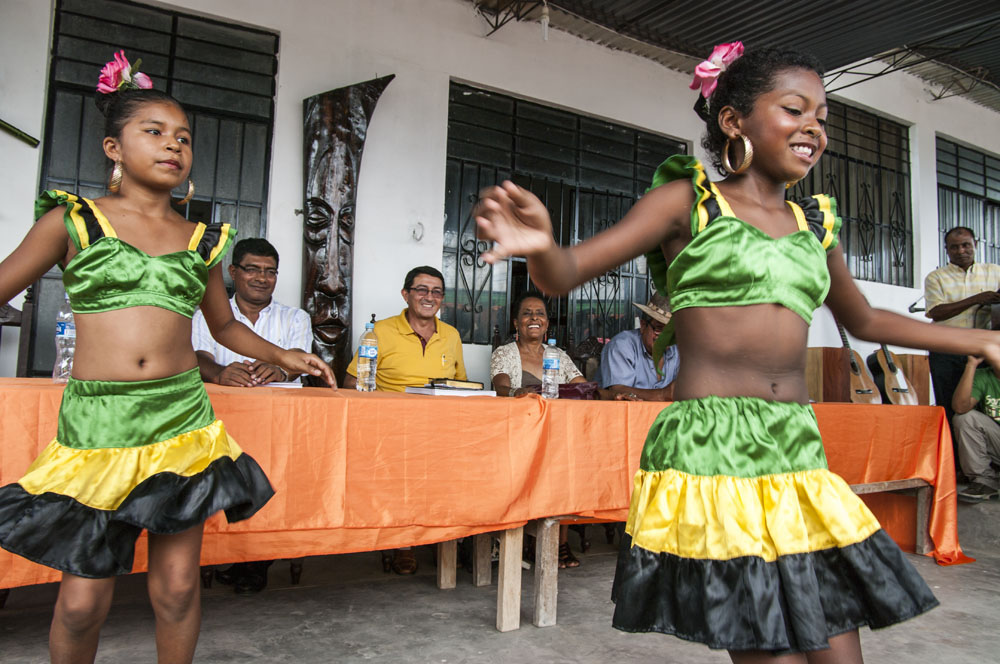 In addition to its indigenous nations and its Spanish colonization, Peru has been the final destination of many migratory movements; thus, nowadays we can find significant percentages of Peruvians from European, Japanese, Chinese and African descent.

Many of these communities still preserve their traditions and some groups are actively working on preserving these cultural heritages, like the Yapatera. The Yapatera is a small agricultural village located in the region of Piura (northern Peru), that some 6,000 people (mostly descendants from African slaves) still call home.

It hosts a small but very enthusiastic cultural center which recently inaugurated its own Cultural Museum, with the presence of Afro-Peruvian star Susana Baca, a popular singer and former Minister of Culture of Peru.

It’s the reason why a delegation of Communication Sciences students from the Universidad Científica del Sur (and their professors) made an 18-hour bus journey from Lima to Yapatera, to audio-visually document, not only this special event, but also of other local celebrations and traditions, having a real intercultural experience living with the Yapateran community for ten days.

The Museo de la Casa de la Cultura de Yapatera, (Museum of Yapatera Culture House), decorated with a huge mural depicting Nelson Mandela, was inaugurated on January 19th, funded entirely by private donors and with no government funding at all.

It opened with a small permanent exhibition of photographs and pottery, but intends to host in the future more traditional art collections, documents and papers, and to organize seminars and research on Yapatera’s history and African heritage.

The enthusiastic university team videotaped and photographed the two main annual events in Yapatera: Saint Sebastian (the local patron saint) festivities — a celebration that brings home most Yapaterans who have migrated to Lima or any other big city; and the mango harvest festival — an event recognizing the top-quality producers of the fruit and has become a big tourist attraction, due to the extreme sweetness of this fruit and because many of these mangoes can weigh as much as 7 pounds each.

In addition to conducting research and interviewing many of the oldest local residents, the university students shot hundreds of photos and video footage to produce material for a multimedia exhibit that will be showcased at Yapatera’s Museum in a few months, before it begins as a traveling photo exhibition.

One of the residents most thrilled about attending this future event is Miteria Cuadrado, the oldest Yapateran, who was born to slave parents and is currently 103 years old.

In a country where an estimated 17 percent of the total population can trace their descent from Africa (159 years after the official abolition of slavery), efforts like the ones hosted by Casa de la Cultura de Yapatera, and achievements such as opening a museum, may still be small and sporadic but their importance are progressively being recognized by cultural and academic institutions in Peru.

Furthermore, Yapaterans, whose way of life has depended on agriculture for many generations, are just now realizing that their oral traditions, beautiful pottery and rich cultural legacy can become not only a way to supplement their livelihoods by attracting tourism, but also be their passport to a better quality of life.

M. Isabel Guerra is based in Lima Peru.