Peru’s first and only female — superhero or super-sex symbol? 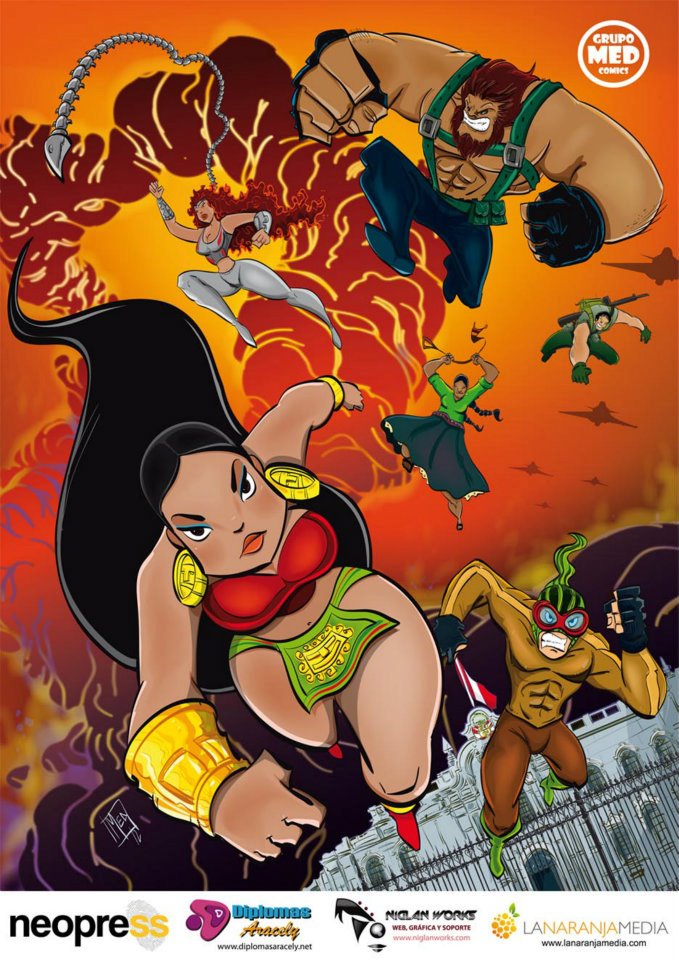 By Gareth Hunter
Peru This Week

Peruvian superhero, Chola Power, regularly saves people from the dark forces of various supervillains. But, can she save herself from being a sexual stereotype?

Is it a bird? Is it a plane? Is it Superman? No, it’s Chola Power, Peru’s first and only female Superhero! Chola Power, created by Martin Espinoza, first appeared in 2008, when she won in a competition designed to discover a Peruvian Superhero. She then made her debut in the Peruvian MEDcomics journal in 2009.

Chola Power, real name Elisa, is the daughter of the sun god. She was born in Andahuaylas and her parents died at the hands of terrorists, but her grandmother was able to get her out of the attack, saving her life. Her powers lie in her relationship with the gods, who have given her all her strength, courage and indefatigable temperament.

Chola is certainly a formidable hero, but also has her human side— meaning her emotions can lead her into trouble, as well as causing her to react to things in a sometimes potentially fatal way. But she doesn’t fight alone; Chola is part of RACE, a group of Peruvian superheroes, and shares adventures with The Guachy-man, Oversized, Xcorpiona and Supermamacha, fighting such villains as Mr. From Darkness, who with his followers will do their utmost to overthrow Chola Power.

When discussing a female superhero, we cannot ignore the feminist perspective, though many might argue that Feminism is lost in comic books.

One of the first female superheroes to appear on the pages of our comics, and indeed one who has subsequently become a prominent feminist symbol (whether positive or negative remains open for debate) is Wonder Woman, who apparently started work as the Justice League Society’s secretary, and eventually became as popular as Superman and Batman. Her rise from her humble beginnings as a stereotypical female administrator, albeit a super one, to being arguably the most famous female superhero in existence, is a reflection of the changing approach to female characters in modern comic books.

This change for Marvel and DC (two giants of the industry) has been slow and, in fact, they are companies still dominated predominantly by white males and their comics continue to be read predominantly by white males, so their depiction of female characters continues to reflect the interests of this demographic. But is this change reflected in Chola Power? The ambiguous answer, in this writer’s humble opinion, is yes and no.

One of the things Marvel and DC have done with their female superheroes over the years is to ‘hypersexualise’ the character. Skimpy skintight outfits barely cover hourglass figures, with enormous breasts and waists so narrow some of these ladies look as though they may be scooped up easily with one muscled hand. They may have only 60 minutes to save the world, but they’ve somehow found time to apply elaborate and perfect makeup, which emphasizes their cheekbones and adds mystery to their faces.

The only purpose of these costumes is surely to titillate the reader, as they would be completely impractical in a battlefield situation, and these women’s wonderful heads of shining hair would allow their enemies to grab and dispatch them easily in a fight. This is something that Chola Power seems to have in common with her North American counterparts. In order to give her that lovely Incan look, she is depicted as a beautiful Latina lady, complete with long shiny black hair, large dark eyes and green loincloth.

Having said that, Chola doesn’t seem to be an offensive female character. Although attractive, she has a seriousness and solidness to her that suggests she means business and is not to be trifled with, rather than a glamor model who has decided to play dress-up and join in with the boys in saving the world. Unlike some of the DC and Marvel creations, her character seems to have some depth and personality, though this remains to be seen in her future adventures.

She is not the ‘token’ female of the group, like Wonder Woman in the Justice League, accompanied as she is into battle by Xcorpiona, another formidable looking femme-fatale (who wears loose fitting trousers by the way!) and she is not the type to sit bravely tied to a chair waiting for the men of RACE to come and save her. Remember, it was her grandmother who pulled her from danger as a baby. All in all, to use a parlance of the 1960’s and 70’s, she seems to be one groovy chick.

As writer Laura Hudson wrote on the Comics Alliance website, “I have long maintained that to bring in more female readers, superhero comics don’t even need to specifically target women, as much as they need to not actively offend them. This is not an insanely hard thing to do, and yet here we are.” Will female comic book fans in Peru take to Chola Power? Only time will tell.

To find out more about Chola Power, and her creators, visit MedComics’ facebook page.