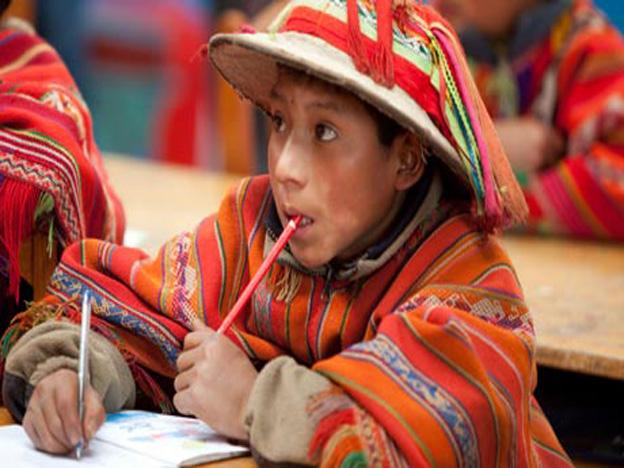 Peru’s indigenous languages are fighting for survival, but effort are being made to keep them alive.

Peru has lost at least 37 native languages like “Uro” and “Paquina,” but even with that huge loss, there still remain 47 native languages in the country. At one point there were at least 84 languages used by Peru’s native community, which means Peru has forgotten more languages than most countries will ever learn.

Tasked with protecting the country’s cultural identity, Peru’s congress passed Law 29735 in July 2011 for the preservation, development, revitalization, and use of indigenous languages for future generations. The law served as a sweeping reform and incorporated every distinct ethno linguistic variation as one of Peru’s official languages.

The minister of education, Patricia Salas, recently announced that these languages must be included in the curriculum at various schools around the country, in order to prevent their extinction. But before adding the languages into the curriculum, the Ministry of Education must standardize the alphabet of the 47 languages that still remain and are still used in the country.

This will be a difficult task as only 16 of them currently have an established alphabet that is recognized by the education body.

Rosa Maria Mujica, director of the rural education arm of the Ministry of Education, explains that before crafting an alphabet one first needs to consult many experts.

“For example, even though there are only four native languages in the Andes compared to 43 in the Amazon, experts have been able to reach a consensus on the structure of the Amazon alphabet much faster than the Andean ones,” she said.

One shining example of the difficulty in reaching a consensus is the Quechua language. It’s had an official alphabet since 1985, but there are many variations of the language throughout the mountainous areas where it is spoken. So far, two variations of Quechua have been recognized: Quechue from Collao and Chancha.

Mujica tells us that it’s a very meticulous process, but the reward is establishing a concrete agreement on the written version of Quechua.

The first native alphabets to be approved were Quechua and Aimara, followed by Harakbut and Ese Eja in 2006. In addition to the 16 languages that currently have established and certified alphabets, this year it looks as if the Ministry of Education will approve five more native alphabets: Achuar, Kakinte, Kulima, Matses and Ticuna.

Once the alphabets are officially recognized, the Ministry includes them in government communications and textbooks within the bilingual communities. So far, the government publishes literature of this nature in 20 native languages.

But before further efforts can be made, the government says it needs to gather more evidence about the demand for these native indigenous languages.

The last census was administered in 2007. It revealed that more than 4 million Peruvians belong to ethnic groups that still use their native language. Out of that population, 83 percent spoke Quechua, 11 percent spoke Aimara, and 6 percent used another native language as their mother tongue. However, according to the Institute of Census and Statistics, these numbers don’t reveal significant information about the number of languages currently used within Peru.

Karina Sullon, a linguist, says that the methodology used by the Institute was flawed and it is still impossible to determine how many indigenous speakers and languages there are in the country.

“The findings made in the 2007 census show us how many people belong to each one of the ethnic groups, but don’t reveal who speaks and who doesn’t speak their native languages,” Sullon said.

For example, the 2007 census claims that nearly 100,000 people belong to the Haninka community, but this number doesn’t really tell us how many variation of the language currently exist and how many people use them in their daily life.

Therefore, the Ministry of Education is asking the Institute of Census and Statistics to perform a more specific inventory of native peoples and their languages. Now, the only thing stopping the new census is approval from the Ministry of Economy.

The law that recognized the indigenous languages as official Peruvian tongues, Law 29735, also authorizes to the government to train functioning translators to serve as mediators between the native groups and Lima. So far, 150 interpreters have been trained in a series of workshops held by the Ministry of Culture. Since Quechua is the most widely used native language, translators have been trained to read a write in five of its varieties.

Beyond serving as intermediaries for the community, the interpreters are also being schooled to translate the Peruvian Constitution, rules on sustainable forestry, and Peruvian rights about inventions and new technologies, into Quechua.

These measures to prevent Peruvian languages from disappearing will help Peru to retain its cultural integrity. Language diversity is linked to the expression of individual and collective identity, as well as a different way of conceiving and describing reality, and these languages should be celebrated.