Prioritizing the Right to Health: Cuba 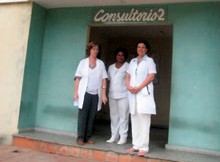 We often hear the claim that the only way to improve healthcare, at home and around the world, is through free trade, privatization, and corporate deregulation. Yet Cuba demonstrates that high standards of health and healthcare are attainable if governments meet their obligation to ensure health care for all.

In Cuba, free, comprehensive, high-quality healthcare is guaranteed to everyone, as are education, food, and other resources needed to maintain good health. As a result, Cuba, a poor country by most standards, has a life expectancy of 79 years (just over the expectancy of 78 years in the US), and some of the highest global rates of child immunization (over 95 percent) and school enrollment (nearly 100 percent).

In fact, the biggest threat to public health in Cuba comes from the United States. Cuba is being subjected to the longest-running, most severe embargo in US history, which prevents Cuba from purchasing urgently needed food and medicine, with grave consequences for Cuban women and their families.

Members of the US Congress have repeatedly introduced bills to end the policy, which was first imposed in 1961. Even amongst Cuban-Americans-commonly cited as the strongest proponents of the embargo-there is a growing call for ending the policy.

In 1989, with the dismantling of the Soviet Union, Cuba lost 85 percent of its foreign trade. The US exploited the economic crisis by escalating the embargo and intensifying pressure on Cuba’s health care system. Throughout the 1990s, medicines, supplies, and equipment—ranging from pens and paper to advanced technology—became even more scarce. Incidence of infectious disease and parasitic infection rose, as did death rates from tuberculosis, typhoid, and diarrheal diseases.

But even during the worst years of the crisis (1989-1993), the government guaranteed that vulnerable sectors of the society did not bear the brunt of the embargo. So while millions of Cubans have endured hunger as a result of food shortages, equitable food distribution policies have ensured that scarcity meant weight loss for most adults, not malnutrition for children or pregnant women.

Cuba has maintained its commitment to a preventative healthcare system that is a model for most of the world. That is more than we can say for the US, where despite the resources at our disposal, our local and national policies stills allow for people to go without even basic health care.

MADRE works to change US policy towards Cuba, calling for an end to the embargo and for normalized relations that respect Cuban sovereignty and the human rights of women and families in Cuba. MADRE works in partnership with health professionals in Cuba to deliver life-saving medicines to combat health threats in Cuba that are exacerbated by the US embargo.

Click here to learn more about our current campaign to provide medicines for Cuba.