This week, a play debuted in Mexico City that enables victims of gender-based violence to face their fears and insecurities while informing the audience about the diverse forms that violence can take in society. Three out of five women have suffered some form of violence in Mexico. The play is part of a larger social impact theater project involving inmates at juvenile delinquency centers and prisons. 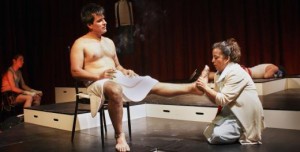 MEXICO CITY, MEXICO – Laura Acosta, 50, recalls the day that one of her daughters showed her an unusual casting call on the Internet.

It opened with a short, but powerful statistic: “Three out of five women have suffered some form of violence.” Below it described a project offering women who have suffered gender-based violence an opportunity to confront it through theatrical work.

“I found it appealing,” Acosta says, who had studied acting but pursued motherhood over a career in theater. “It’s something I thank my daughter for.”

Acosta says she was suffering from internal violence, which she defines as the “lack of self-knowledge, not knowing how to deal with situations and giving into fear, bowing your head, keeping quiet.”

The same casting call caught the attention of Evelina Arvizu, 36, while walking through a subway station.

She was looking for something to get rid of this feeling plaguing her.

“It was like loneliness, sadness, and I was always feeling this way,” she says while dropping her head.

But when she saw the sign, she felt it would be just what she needed.

“‘It has to help me internally,’” she says she thought.

A year has passed since both Acosta and Arvizu saw the sign, and now both women are part of the cast of the play “Medea Material,” which opened this week.

Twenty women confront their struggles with gender-based violence through their roles in an adaptation of “Medea Material” that opened March 5 in Mexico City. The play is part of a broader social impact theater project that gives victims of violence and prisoners a vehicle to address their issuses through theatrical work. The director says that the play is unique because it conceives of theater as a social service but also features professional quality.

The play is based on an adaptation by German playwright Heiner Müller of “Medea,” an ancient Greek tragedy written by Euripides. In the tragedy, Medea’s husband, Jason, is unfaithful, so she murders their two children out of revenge. Müller’s work also raises the issue of Jason’s hunger for power.

Itari Marta, 35, who has worked as an actress for nearly 20 years, serves as the play’s director. She adapted Müller’s work to incorporate the issues that each performer wants to work through.

The staging of the play is like a trip back in time. It showcases the different facets of women since the beginning of the 20th century through 18 Medeas. The actresses playing these Medeas range in age from 20 to 62.

“Each one plays a Medea, based on her personality or on what she has not been able to resolve,” Acosta says.

The women’s personal experiences and their confrontation of them through their roles in the play show how violence manifests in many forms in society, whether it is physical, verbal, emotional or psychological. The play becomes a cathartic process in which the women can challenge their aggressors – whether they’re other people or even themselves – on stage.

Because Acosta is introverted, the play gives her a vehicle outside her nature to confront the internal violence that she has suffered. Her character is a strong, secure and empowered Medea.

“Personally, I am the introverted Medea, who has lived through internal violence,” Acosta says. “In the play, I have tried to get rid of that with which I have been choking myself for many years.”

For example, she takes part in a monologue split among five Medeas in which they yell at Jason for committing incest with his own daughter.

“We are women who complain,” Acosta says, “who are so full of anger, of pain, that we are expressing it all to Jason.”

That hers is a Medea who is “resentful, who complains” – as Acosta defines her character – has allowed this housewife to face her fears. But she also acknowledges that playing something contrary to her nature is a lot of work.

Arvizu says the same. She plays an early-century Medea whom she describes as “modest.”

This ties into an issue she has endured pressure about during her own life. Arvizu says her father used to tell her to cover herself every time he saw her wearing a low-cut blouse.

When GPI spoke to her before the premiere of the play, her father did not know that she was a part of this project. He especially didn’t know she would appear in the show nude from the waist up, challenging this pressure to be modest.

“It has been a lot of work because everything I have lived through has embarrassed me,” Arvizu says. “When I realize it over time, I say, ‘Yes, I want to get rid of it, but I can’t.’”

But the play has helped her to liberate herself from everything she has lived through.

“I have always covered myself and from everything until I said, ‘I am fed up already,’” she says. “Because in a certain way, you’re either in the project or you’re not.”

For Adrian Alarcón, 29, one of three men in the work, playing his personality’s opposite also poses a challenge. But, like his fellow actors, he welcomes it.

“It also allows you to generate very interesting things on stage,” he says.

He plays a son of Medea and Jason who is a boxer, despite his slender build.

“My physical build is very far from that of a boxer,” he says. “But I take the punches, which is an example of the inheritance of the violence as a child through a socially accepted mechanism.”

Marta explains that she included Alarcón, the show’s lone professional actor, to create “a paradox” between him and the three other children of Medea and Jason, who are not actors. The other son was imprisoned in the Comunidad de Tratamiento Especializado para Adolescentes San Fernando, a juvenile detention facility. The two daughters are victims of gender-based violence.

These three projects have been possible with the support of a theater called “Foro Shakespeare,” or the Shakespeare Forum, where the cast will perform “Medea Material” from March 5 until June.

“The intention is to unite the social impact projects,” Marta says.

That’s why Israel Rodríguez, 34, who served 18 years in the Santa Martha Acatitla prison after being convicted of homicide, plays the part of Jason.

“I am interested in showing the women in relation to these men who are representations of violence in this city,” Marta says.

For Rodríguez’s character, Jason, the director says he represents “all the men in the world, who seek to conquer, who need an empire – whatever it may be – and who pursue power.”

For Rodríguez, the role of Jason has uncovered how violence plays out in daily life.

“I practice violence and also the submission to it without being aware of my own decisions,” he says. “We all have something to relate to with Jason and Medea.”

Marta sees the theater as a social service whose role should reflect reality to the viewer like a mirror.

“The theater acquires importance in a society and therefore dignifies it,” she says.

Marta acknowledges that there are many other social impact theater projects in the country. But she says they lack forcefulness for two reasons: First, the theater world sees social impact theater as a job no one wants to do and a risk no one is willing to take. Second, those who do participate in it see it as charity or something to do in their free time.

“The public does not take it as a serious and convincing act, but as something praiseworthy,” she says. “With these projects, I have tried to professionalize them, to dignify them and to give them impact.”

The result is evident. Audience members who do not know that the majority of the actors are not professionals would possibly never make the distinction. They also probably would not realize that these actresses are unloading their emotional struggles with gender-based violence on stage because they express it through their characters.

“If I were not here, I do not know where I would be,” says Arvizu, who has spent the last year of her life attending theatrical workshops and rehearsals on body movement, voice and character psychology, among others, to prepare for the play.

Acosta compares the women’s preparation process to creating a sculpture.

“From a shapeless mass, a lump of emotions,” she says, “up until now that it has been polished. Now, each has a vision of her own Medea.”