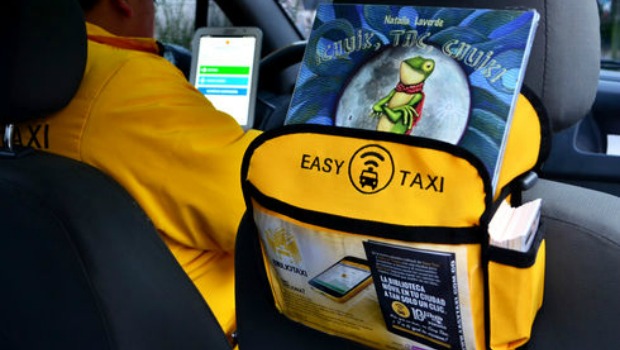 The Bibliotaxi cultural project, which offers free books to passengers in 25 Brazilian cities, has now spread to Chile, Colombia and Peru and is going digital.

“The idea is to put the books in front of people, promoting access to culture and entertainment. There’s nothing better than taxis, and the taxi drivers themselves, who have the gift of gab, to promote this encounter,” said Minas Gerais native Tallis Gomes, the 27-year-old co-CEO and founder of Easy Taxi, a pioneer in using mobile services to book taxis in Latin America.

This year, Bibliotaxi partnered with the Saraiva bookstore chain, which donated more than 80,000 books to the project, including literary classics, new releases and major best sellers. They are available in almost 50,000 vehicles nationwide.

Less than six months ago, Bibliotaxi spread to Chile, Colombia and Peru.

In the Colombian capital of Bogotá, efforts are concentrated on a digital version of Bibliotaxi. Since April 24, Easy Taxi motorists have been circulating with kits for the project. In addition to 3,500 standard books, 100,000 digital books also are available to passengers through the use of a mobile app.

“Our goal is to create a huge collaborative library, bringing together culture and mobility,” Gomes said.

When the ride ends, the passenger can take the book home, free of charge, and return it during another taxi ride. Passengers who wish to donate books can give them to any taxi driver involved in the project or contact Easy Taxi, which will pick up donations of at least 200 books.

“We kicked things off [with this donation of over 80,000 books], but any book can be donated,” Jorge Saraiva Neto, the CEO of the Saraiva Group said. “There are no restrictions with respect to the genre.”

The initiative began spontaneously in São Paulo’s neighborhood of Vila Madalena, when taxi driver Antônio Miranda began lending books to his regular passengers. The project started expanding with support from the website Catraca Livre and the NGO Instituto Mobilidade Verde.

In 2012, journalist and cultural activist Gilberto Dimenstein of Catraca Livre introduced the project to Easy Taxi – and that’s how the initiative went nationwide, with an initial collection of 8,000 books and the slogan “Uma mão na direção, outra na educação” (One hand on the wheel, the other on education).

Gomes said he no longer knows the collection’s size, due to the significant number of donations by passengers to taxi drivers.

“The passenger doesn’t need to register before borrowing a book. We don’t have any way to establish official figures,” said Gomes, adding he’s not concerned about the potential for the books being damaged or not returned.

Lincoln Paiva of the NGO Instituto Mobilidade Verde encourages every taxi service to enroll in the project.

“The initiative is cool and totally free. Any taxi driver or company can participate,” said Paiva, who is involved in several urban mobility projects in São Paulo.

In Natal, the state capital of Rio Grande do Norte, the project has been a success with tourists, taxi driver Elissandro Alves said.

“Given that Natal receives many tourists from other Brazilian states, many of them borrow books from me to read during their holiday and return them to another taxi driver at the end of their stay,” Alves added.