Latina Lista: News from the Latinx perspective > Columns & Features > Global Views > The Rise of the Private Security Industry in Guatemala

The Rise of the Private Security Industry in Guatemala 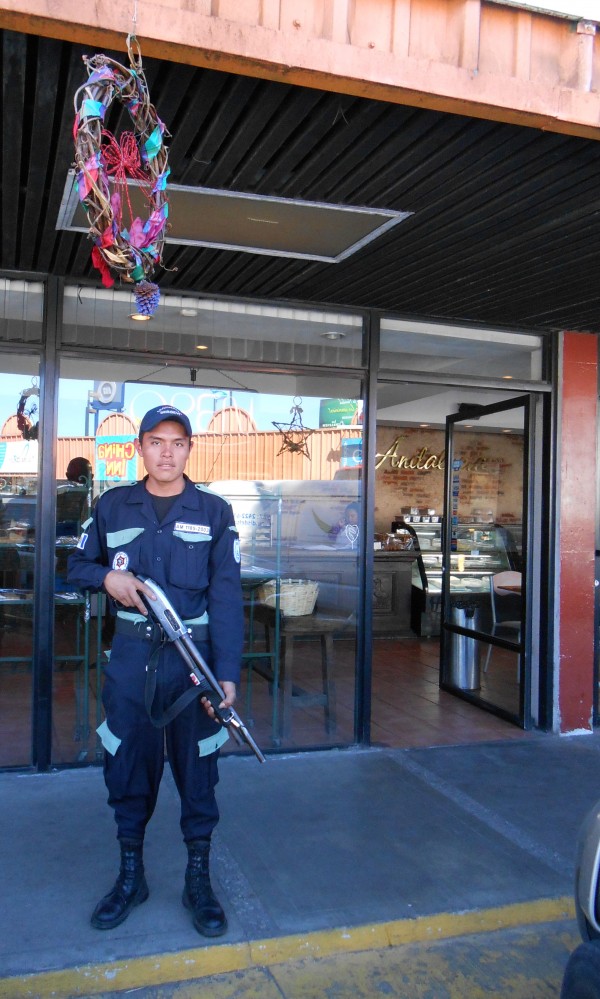 In few places are security guards as prevalent as in Guatemala. Analysts estimate that there are between 100,000 and 150,000 private security agents working in the country, which outnumber the 25,000 police officers by at least four to one.

Although the exact number is unknown since many companies fail to register their services, it is believed that the security industry accounts for more than one percent of Guatemala’s population.

In the Central American nation’s capital, entrances to fast-food restaurants, hair salons and coffee shops are lined with armed officers – a reaction to the increasing crime rate that has prompted even the smallest of businesses to seek extra protection.

Ever since the country’s 36-year civil war ended in 1996, police have failed to protect citizens and many argue that crime is worse now than it was during the bloody conflict that killed 200,000 people.

One explanation is the escalating drug trafficking cartels that have devastated Central America and stunted the region’s development – allowing criminal gangs to spread, violence to intensify and corruption to penetrate at the highest level.

Wealthy residents and the business elite say that in a country where kidnapping, carjacking and extortion run rife, private security companies can offer them the protection that the police cannot. So they take personal safety into their own hands: hiring body guards and chauffeurs to drive them around the city in bullet proof vehicles.

At ‘home time’ the gates of the country’s top private schools swarm with bodyguards waiting to escort their employers’ children back to their gated communities; while inside the city’s lavish malls, men in dark suits follow families around, eyeing up passers-by and muttering potential threats to invisible colleagues through their Bluetooth headsets.

According to the United Nations, Guatemala has one of the highest levels of violent crime in Latin America and an average of 40 murders a week occur in its capital. The majority of the population that lives below the poverty line is concentrated in rural indigenous areas – where access to education and jobs are limited.

Since few private security companies require their employees to have prior experience or a high level of schooling, many unemployed people from the rural areas flock to the capital to take up a job as a security guard where they can earn a good salary, without the need for credentials.

Israel Castillo came to Guatemala City when he was 23 years old. For the past five years he has stood on guard outside small supermarkets and malls in the Guatemalan capital brandishing a .38 revolver, 12 bullets and a truncheon. Before moving to the city he had never held a firearm; he harvested coffee and maize in his hometown of Jalapa, a mountainous region 175km from the capital.

“I don’t really like living in the city,” he says. “I grew up in the countryside so am more used to that. But I had to come here; there is money to be made and you can always find work as a security guard. This way I can support my family better.”

Israel’s story is typical of that of the hundreds of thousands of private security guards, registered or unregistered, that operate in Guatemala. Many of them earn minimum wage, carry dangerous weapons and often lack proper training: a lethal combination that at times threatens, rather than protects, the country’s citizens.

Government officials hope that a new law to monitor unregistered private security companies will curb the number of agents operating illegally in Guatemala and provide existing ones with better training. The regulation aims to create a database of all the private agents that work in the country, monitor their movements and ensure that all the weapons they use are registered. Any businesses that fail to comply with the rules will receive strict punishment.

Although some people are skeptical about how successful the new law will be, for now it is a start at reigning in an industry that has been spiraling out of control for the past decade.