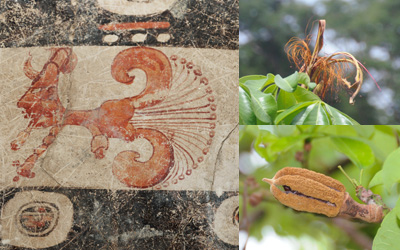 Nicholas Hellmuth’s fascination with the ancient Mayas started long before he was part of the team that dug up the tomb of the Jade Jaguar King in Tikal, Guatemala, at age 19. But that’s when his interest in Mayan plants began.

“When I dug up the tomb the guy was smoking tobacco – that’s a plant. There were plants in all the vessels – every vase had food in it,” explains Hellmuth, the founder and director of FLAAR, The Foundation for Latin American Anthropological Research.

The US archaeologist originally came to Guatemala on Mayan excavations, but has since dedicated his life to exploring another side of the Pre-Colombian civilization: separating history from legend in Mayan texts.

He and his Guatemala-based team at FLAAR verify the authenticity of every mention of flora and fauna that decorate the pages of ancient Mayan books and scriptures to discover what is mythical and what is not.

“In the Popul Vuh [the Mayan story of creation] when Hun Hunahpu is playing the ballgame, at one point he has no head – his head is cut off – and his brother goes out and makes a head out of a pumpkin. What we study is: Is that true? Did they have pumpkins shaped like heads?” asks Hellmuth.

In search of the answer, Hellmuth and his team embarked on a month-long field trip traveling all over the Central American nation. They studied around 3,000 pumpkins, visited every pumpkin patch in the country and spoke with farmers and locals, before eventually stumbling across what they had been looking for in the back of a truck: a pumpkin shaped like a head.

And then there are the leaf-cutter ants.

“Leaf cutting ants carry leaves don’t they? Do they carry flowers too? The Popul Vuh states very clearly that some of the ants are carrying whole flowers and some are carrying particles of flowers; some are going up trees and some are on the ground. We found them in Tikal and photographed every aspect of that – it was absolutely amazing.”

According to Hellmuth, no one has ever documented the amount of flora and fauna that FLAAR has recorded to such a detailed level before. The organization has the first-ever list of all the plants used by the Mayas and have electronically categorized them into edible plants and non-edible ones.

“We decided we were going to make a complete list of every plant they’d ever used: whether it was for cleaning their toenails, cosmetics, eating or smoking – anything. We list them theme by theme: edible plants, edible pulp and edible flowers,” says Hellmuth.

It is hoped that the findings will assist in suggesting better diets for local people and save native species from being forcibly removed by residents who are unaware of their benefits.

Hopping, skipping and jumping between subjects as new plants start to flower, the FLAAR team go out at night all over the country to capture Guatemala’s nocturnal activity and have developed their own cameras and photography techniques to assist them.

Findings are uploaded onto the organization’s website as the team slowly begins to tick off the items on their ‘Most Wanted’ list, which enables them to piece together what Mesoamerica was like 2,000 years ago, based on flora and fauna.

“Finding these plants is very difficult. We were looking for magnolia for four years and we just found it, but we haven’t found it flowering. There are some plants that we haven’t been able to find anywhere in the country after four years of looking for them. But we know they are here and we will find them,” says Hellmuth.

FLAAR’s studies have turned a small corner of Guatemala City into a mini jungle with spiders being raised above desks and bees collecting in the assortment of trees in the office’s garden.

The organization hopes to eventually publish its findings in books and animations that will allow people of all ages to connect with the ancient Mayans. But for now it is providing the world with one of the most extensive collections of flora and fauna every recorded.