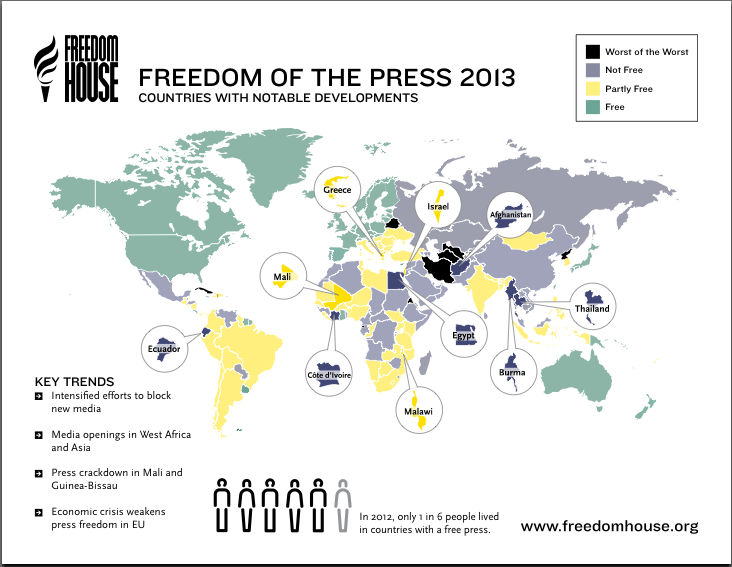 LatinaLista — According to Freedom House, an independent organization monitoring freedom issues around the country, only 14 percent of the world’s population lives in a country with a free press.

It’s a disturbing decline discovered by the watchdog group who found that one of the areas of journalism most harshly oppressed is in new media and citizen journalism. Among the many regions guilty of this kind of censorship, sometimes deadly, is no farther from the United States than several yards across our southern border.

The Americas: The region experienced a decline in press freedom in 2012, with Ecuador and Paraguay falling into the Not Free category and erosion also noted in Argentina and Brazil. The media environment remained extremely restrictive in Cuba and Venezuela, and Mexico continued to be one of world’s most dangerous places for journalists, with high levels of violence and impunity for crimes against media workers, though positive legislation to address this issue was passed in 2012. The United States is still among the stronger performers in the region, but the limited willingness of high-level government officials to provide access and information to members of the press was noted as a concern.

One of the more disappointing revelations of the report was the fact that Chile was downgraded from “Free” to “Partly Free.” Since freedom of expression is one of the hallmarks of a functioning democracy, an issue strongly supported and promoted by the United States, it’s not surprising that the U.S. Embassy in Chile saw the need to create a unique contest meant to get young Chileans started early on exercising their voices.

“Periodismo Ciudadano” (Citizen Journalism) is a video contest open to young people, ages 14-25. The goal of the contest is to get young people to discover those issues or events happening in their communities that are not getting deserving press coverage — and do it themselves.

The contest requires that entries be original 3-minute videos of an issue that illustrates the importance of free access to information and the value of an uncensored press.

“We see it [the competition] as a way for Chilean youth, who are well-versed in digital technology, to report on issues that are important to them and their communities,” embassy spokesperson Gabrielle Guimond told The Santiago Times.

The contest ends June 14, 2013 with a panel of professional communication experts judging the entries. The winning citizen journalist receives an iPad. All video submissions, that meet the requirements, will be shared on the embassy’s Facebook page and website.