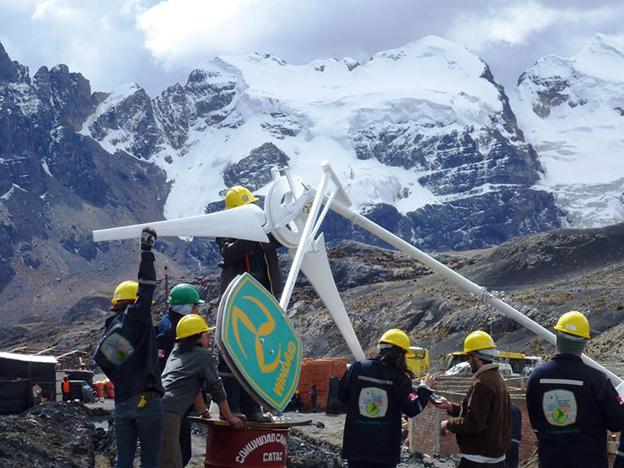 At more than 16,400 ft the WindAid turbine set the Guinness World Record the highest-located wind generator.

A group of students and professors from Northampton Community College in Pennsylvania, USA, helped set a new world record by being part of the team that installed the world’s highest-altitude wind turbine at the main access point to the Pastoruri glacier in the southern part of the Cordillera Blanca.

Pastoruri is one of the world’s fastest-receding glaciers. As a tourist attraction, the new turbine will bring electricity to shop owners, guides and cooks who serve tourists headed to see the glacier, said Christine Armstrong, the professor who designed the study-abroad program for the college.

According to Northampton Community College, at more than 16,400 ft the WindAid turbine set the Guinness World Record as the highest-located wind generator in the world.

WindAid is a social entrepreneurship project based in Trujillo that builds wind turbines for Peruvian communities in need of electricity.

Eight students and two professors were responsible for the project. They traveled to Trujillo on May 31 where they actually built the wind turbine, before travelling further to install it.

For students, it was a life-changing experience that reinforced the power of volunteerism.

“Peru has a way of bringing people very close,” John Schaffer, one of the students, told a Pennsylvania newspaper.

The turbine is much smaller than the ones seen in the US but it meets the small village’s power needs.

“There was no power there,” Dan Phillipps, the other professor in the group told newspapers. “We provided their first source of power.”

Amid snow and hail, the installation was finished and met with a celebration by the local community.

About 40% of the rural population of Peru still isn’t connected to any form of electric supply.